Sore gums. What to do at home than to rinse after removal, tooth cleaning, for crowns, dentures, pregnancy

If a sore gums, bleeding, there was a heightened sensitivity, time to think about visiting the dentist. The state of the dental cavity affects the health of the whole organism.

The causes of sore gums, signs

Disease abutment apparatus - periodontal - leads to the development of periodontitis. The tooth is surrounded by a tissue complex, periodontium, which support it in the alveolus ensures strong attachment gingiva to the tooth surface. It includes gums, dental cement, periodontium, alveolar bone and the periosteum.

Desna, which surrounds the tooth, is spliced ​​with him tightly. It has a pocket, which constantly live bacteria. If a person is not a professional hygiene, the bacteria multiply and eventually inflamed gums.

Periodontitis can proceed in mild, moderate and severe form. Each of them is characterized by deterioration of bone tissue, formation of periodontal pockets. From the depth of the pockets depends on the severity of the disease.

At the initial stage of pain may be omitted. Subsequently felt pain stimuli in the gums, they are usually accompanied by bleeding. Since the pocket increases, there is a ripple. Pain arises when brushing teeth, biting and chewing. In the acute phase of periodontitis appears severe pain, swelling, redness of the gums.

Sore gums with gingivitis - inflammation of the gums without disrupting the supporting apparatus of the tooth. Its cause dental plaque, food debris accumulated around the teeth and, consequently, multiplied numerous microbes. If a long time do not treat gingivitis, not to carry out professional cleaning of the teeth, it leads to the development of periodontitis.

The inflammatory process is a dot around a tooth, in the acute or chronic form. The teeth appear a kind of plaque, usually on the inner surface of the lower front teeth. An unpleasant odor and bleeding, particularly when brushing the teeth, biting hard foods. Gums may increase in volume, thicken, become rough, painful to the touch.

Chronic disease in which the exposure of tooth roots, which leads to increased sensitivity of the gums and tooth necks. The disease is caused by degenerative changes in the periodontal, unlike periodontitis, when the inflammation occurs.

With periodontitis gingiva not bleed even when cleaning the teeth, there is no formation of periodontal pockets, tooth mobility is not observed, but gradually progressing, the disease can lead to loss of all teeth. This disease tend to slow development.

Many doctors believe that the development of the disease affects the internal disorder:

Therapies directed at suspension painful tooth decay. Appointed by the tools that can help improve blood circulation, slow down the process of degeneration.

Sore gums react to the sweet, cold, hot - these are signs of tooth decay. But if time does not see a doctor, then a moment will come when the pain will be no reason to be throbbing in the head, especially at night, which means that the caries process has gone far and developed pulpitis.

The pulp is inside the root canal, it contains everything that feeds the dental tissue within: nerve, connective tissue cells, blood vessels. Inflammation in this region leads to the pulpit.

If left untreated, it can not only lose the tooth, but also to get an inflammatory process involving the tissue of the jaw, which often leads to sepsis.

Often tissue inflammation develops after pulpitnyh pain around the teeth. This is called periodontitis. After the destruction of nerve tissue damage begins that surround the tooth in the jaw. 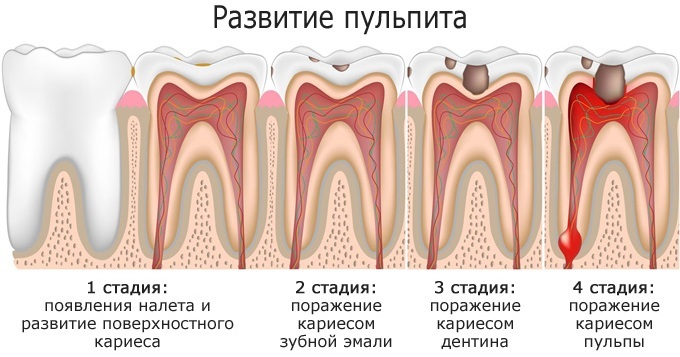 Often contribute to the development of periodontitis poorly healed dentinal tubules after removal of the nerve. Another cause of the disease - stroke, trauma received in the process of establishing a seal.

The pains are pulsating, strong character, often it is difficult to close the jaw. Any touch to the aching tooth brings unbearable pain that arises due to the fact that the surface of the tooth root is accumulated purulent exudate.

When the dentist removes the infected tissue located in the channel, which is subsequently sealed. In the future held sessions of physiotherapy. But often have to resort to the services of a surgeon to completely remove the tooth.

Gums may develop after tooth extraction. Normally, the hole heals after 2 days, and pain before disappearing. If a blood clot in the hole is not formed, it is possible the development of alveolitis or infected wounds. This may occur because of getting infections, food debris in the well of the tooth, oral health disorders.

At the end of 3-4 days may appear minor aching pain at the site of remote tooth. They are enhanced by the growth of the infectious process. Can hurt in the tooth, and in half of the face. Appears salivation, hypersensitivity of the teeth and gums. In some cases there is swelling of the face from the remote tooth.

The peculiarity of wisdom teeth is that they have no predecessors - the milk teeth. They are cut into adulthood, and can be 4. But this is not necessarily, some only 2 or 1, and many do not have them. Teething is slow, causing discomfort and pain.

In the process of the emergence of the wisdom tooth inflammation may occur. It stems from the fact that between the tooth and the gum formed a slit into which the micro-organisms. Inflammation of the gingiva leading to edema, pain in the tooth, which increases during chewing and swallowing, and can also increase the lymph nodes located in the lower jaw.

There are cases when gingivitis occurred under the influence of drugs. For example, patients suffering from bouts of epilepsy, anticonvulsants prescribed.

They to some extent influence the development and growth of tissue, causing dry mouth, swelling of the mouth and gums. These drugs reduce salivation, and it is known, it is a good tooth protector.

Kardiopreparaty cause gingival enlargement, Thus there is a strong swelling of the mouth, it becomes loose, accumulated within the bacteria begin the inflammatory process accompanied by bleeding. Otokshaya mucosa can completely cover a tooth.

Many common drugs, such as antibiotics, result in the death of beneficial flora in the oral cavity, and in their place are beginning to proliferate pathogens. Numerous syrups, mouthwash, oral administration, lozenges containing sugar, contribute to caries.

In addition to specific diseases gingival inflammation in this field have teeth and oral cavity diseases. Stomatitis affects the gums, bacteria, viruses, weakened immunity may be a cause of ulcers, sores and redness in the gums.

Adults who on average suffer from colds from 2 to 3 times a year. This increases nasal congestion that interferes with normal breathing. Breathing takes place through the mouth becomes dry and, therefore, decreases the amount of saliva in it. Excessive dryness promotes the growth of bacteria, increasing the chances of occurrence of caries, gum disease. 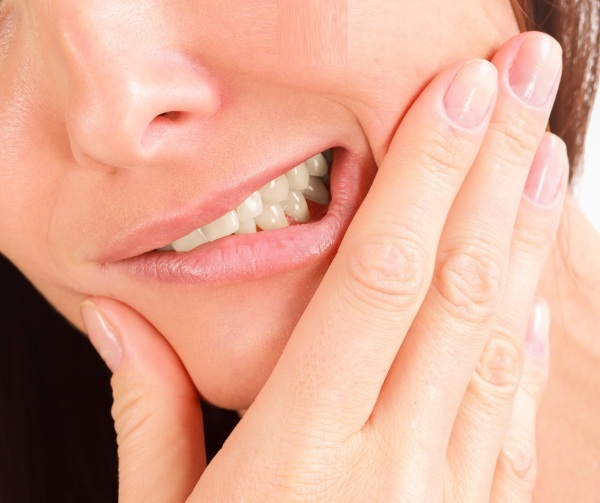 Sinusitis contribute to the development of pain in the upper teeth, causing sore gums around them.

Pain under the crown, prosthesis

Sore gums often for crowns, dentures, set in the mouth. The first reason that inflammation may occur - this is a low-quality material of which are made of the crown.

The second cause chronic irritation of the gums around the crown is associated with impaired biological width required between the outer layer of the skin and bone surface. It is typically 2-3 mm. In this place there are blood vessels, connective tissues, nerves. If the space for the growth of normal skin is not enough, then there are redness, pain, and chronic inflammation.

Gums are the soft mucosa and it can be easily damaged. Aggressive teeth cleaning, especially hard brush will always be painful and cause bleeding. This is especially true of those who are gentle, sensitive gums. Appeared on her wounds have become a potential source of growth of microorganisms.

At the onset of pain and affects the sensitivity of teeth. In some cases, tooth brushing with a soft brush also causes bleeding. This suggests a lack of vitamin C. It is necessary for the proper functioning of the proteins involved in blood clotting.

Treatment of severe pain in the gums pharmacy means

Treatment of gum disease is a complex, the preparations are chosen taking into account the features of the disease. For troubleshooting tools are used: ointments, gels, antiseptics, toothpastes and mouthwashes.

Get rid of the inflammation, you can use anti-inflammatory drugs:

Dental gels and ointments in pain

Before using ointments should clean teeth, rinse the mouth. Then, ointment or gel is lightly massaged into the mucosa. Eat and drink can be no earlier than 30-40 minutes. after application of ointment.

Therapeutic pastes containing extracts of herbal medicines than the cleaning action applied to relieve inflammation, bleeding, in the treatment of gingivitis, periodontitis, caries. Therapeutic paste gums are of two types: with antiseptic herbal tea and increases blood flow, this paste with essential oils.

Sore gums bleed - is unpleasant symptoms, from which you can get rid of with the help of natural remedies. 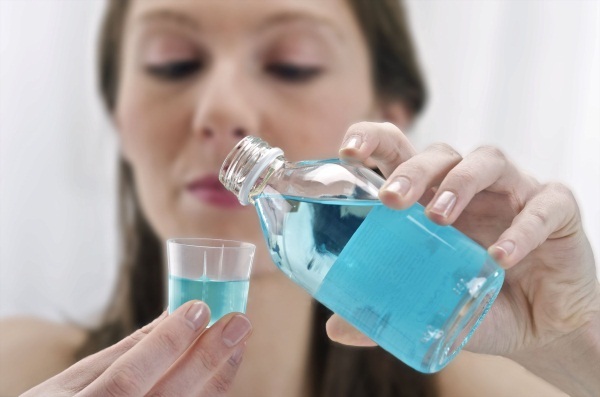 When using oils they can not swallow the mouthwash. To stimulate the production of larger amounts of saliva, which kills microbes should drink more water. A region should also rinse the mouth after each meal.

How can eliminate pain during pregnancy?

Since the hormone progesterone softens the gums and increases the amount of blood flowing to them, they may bleed from any touch to it.

To stop the bleeding, you can use grenades. It has antibacterial properties, it contains a substance that can help in the fight against plaque. The daily pomegranate juice rinse oral reduce bacterial infection.

You can use tea tree oil, which has anti-inflammatory effects. Rinse oil, diluted with water, a good effect on inflamed gums.

Baking soda is a good eliminator various acids which lead to the development of infections in the mouth. Daily brushing teeth soda prevent inflammation of the gums. 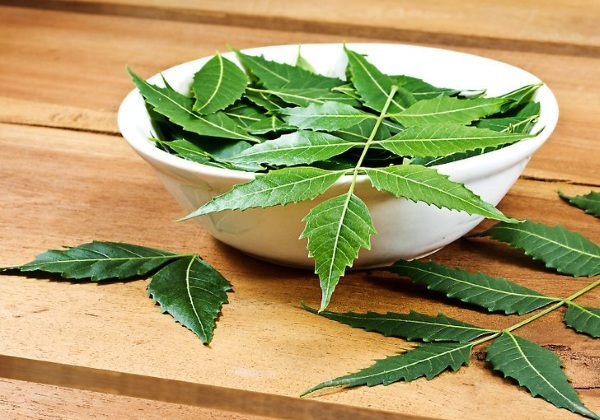 Neem leaves to help stop the bleeding. They can just chew on a daily basis in order to prevent fungal and bacterial infections that love to breed in the area of ​​the mouth. From the leaves you can prepare a solution for rinsing, brew with boiling water.

Milk contains large amounts of calcium and vitamin K. They strengthen the gums, do not allow them to bleed. A cup of warm milk, taken daily, will help cope with the problem. For efficiency, you can add a little turmeric powder.

Possible complications of self-medication. What can be done?

Late treatment can lead to the development of purulent process not only in the region of the teeth and gums, but also diseases in the maxillofacial area. Infection resettled to the oral cavity can cause intoxication whole organism.

inflammation of the gums is considered particularly dangerous after tooth extraction or during the eruption of wisdom teeth.

When choosing toothpastes should pay attention that some are made to teeth, and the other for the gums. Teeth - is a fabric-like structure of bone and pastes them to be mineral: calcium, fluorine, phosphorus.

The gums develops an inflammatory process, and as part of pastes must have anti-inflammatory elements. This can be chlorhexidine. So, in the morning is recommended paste for teeth, and in the evening is better to apply the paste to the gums.

Do not use floss to the teeth to those who have inflammation of the gums, because it hurts them and aggravates inflammation.

Without proper oral care inflammation in the gums will progress. First, they are easy to match the shape, and then goes into an acute disease stage. To avoid this, you should see a doctor in a timely manner and implement its recommendations.

Malyshev tells what to do when the sore gums:

Stomatitis refers to one of the most frequent inflammations of the oral cavity. In children, aphthous stomatitis appears on the inside of the mouth...

Periodontal disease. How to save your teeth, what medicines help, folk remedies, how to treat

Periodontal disease is a disease characterized by oral and periodontal tissue destruction. Treatment is carried out comprehensively, particularly i...