Otipax is a popular and effective drug which is used to treat pathologies of the hearing system of inflammatory origin. The cost of the drug is high, so patients choose cheap analogs with similar properties. Substitutes can be cheaper, but sometimes they are more expensive. When choosing a remedy, the doctor assesses the patient's condition and the presence of accompanying deviations. It is not recommended to select an analog on your own.

Description of the medicine

The medication is available to patients as topical ear drops. They have anti-inflammatory, anesthetic and antimicrobial properties. The effect of the drug is due to the presence of lidocaine and phenazone in its composition. The first ingredient refers to local anesthetics, helps to eliminate acute symptoms that often bother patients with acute inflammatory pathologies of the hearing aid. 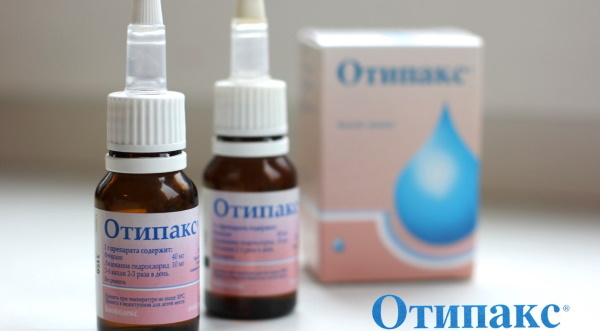 Phenazone belongs to non-steroidal anti-inflammatory components, suppresses the production of substances that provoke the inflammatory process. As a result, the symptoms are quickly eliminated and the development of complications is prevented against the background of the progression of the disease. The medication is considered effective, it acts almost immediately after contact with the affected areas of the skin. elimination of signs of inflammation at the same time leads to the disappearance of edema.

Edema provokes not only pain, but also squeezing of healthy tissues, impaired blood circulation in them. Getting rid of pain can help improve overall well-being. In patients, sleep is normalized, irritability and headache are eliminated.

The gradual suppression of the inflammatory process helps to lower the body temperature. A feature of the remedy is that in the absence of damage to the tympanic membrane, it does not penetrate into the body and does not have a systemic effect. Elimination of systemic disorders occurs only as a result of alleviating the course of the underlying disease.

Otipax (cheap analogs, the price of which is different, may have other substances in the composition) is prescribed to patients after a preliminary examination and in the presence of the following indications: 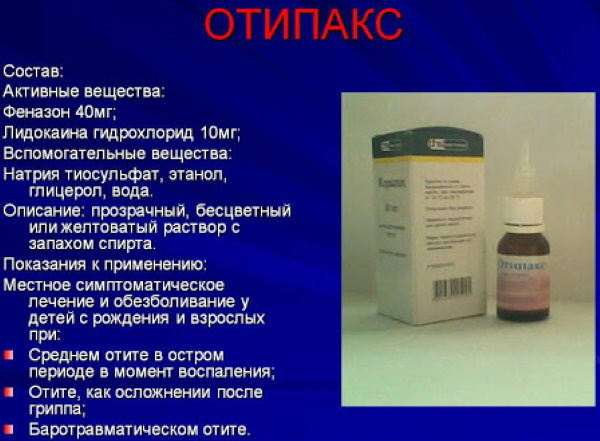 The drug is not prescribed for prophylactic purposes or in the absence of symptoms of a disease of the hearing aid. If the integrity of the tympanic membrane is violated, it is contraindicated to use drops, which is associated with an increased risk of complications as a result of the penetration of the components of the composition into the systemic circulation.

Contraindications for medication treatment include intolerance to the components of the composition or a tendency to such manifestations in the patient's history. The medicine can be used for children of any age, since with proper treatment it does not enter the systemic circulation and does not affect the work of internal organs and systems.

Pregnant and lactating women can also be prescribed drops, provided there are no contraindications. In each case, the drug is prescribed only by a doctor after a preliminary examination. Use according to the scheme and prescription of a doctor helps to avoid the development of complications. the solution in exceptional cases provokes negative reactions.

Otipax (cheap analogs, the price of which in most cases is lower, are not always considered the same effective) are used according to the standard therapeutic regimen for various disorders and their degree severity. The standard scheme involves the introduction of 2-3 drops of the solution into each ear canal 3-4 times a day with approximately equal time intervals. The solution is used only topically. This scheme is suitable for adults. 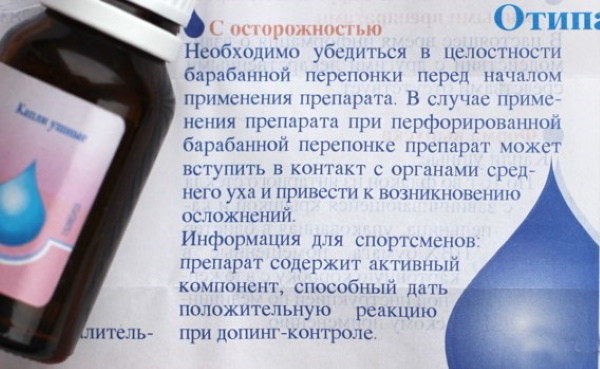 Children under 1 year old are injected no more than 1 drop, patients over 1 year old are allowed to inject 2 drops. For adolescents, the same scheme applies as for adults. The duration of the therapeutic course is usually no more than 10 days, but in some cases 7 days are enough to obtain a pronounced result. Experts draw the attention of patients to the fact that when using a product for children, it is recommended to preheat it to body temperature.

The high cost of the product is considered the main reason that patients choose substitutes with similar properties, but at a more affordable price. Some analogs have a different composition, but have the same effect. The choice should be made by the doctor based on the data of the diagnostic examination.

The most popular analogue of the product, which is also available in the form of a solution for administration into the ear canals. The anti-inflammatory and analgesic effect of the drug is achieved due to the presence of phenazole and lidocaine in its composition. The composition of the analogue does not differ from the original, as well as the properties.

When it enters the ear canal, the medication eliminates signs of inflammation and pain, helps speed up the healing process and reduces the likelihood of a rapid progression of the disorder. Despite this, the analog acts on tissues more aggressively, which can provoke negative reactions in some patients. An analogue is prescribed, like the original, when symptoms of otitis media of varying severity appear, as well as inflammatory pathologies of the external ear.

In a traumatic form of inflammation, the drug can be prescribed only if there is no damage to the tympanic membrane. Like the original, the analogue is used no longer than 10 days.

Children are prescribed 1-2 drops in each ear canal. Adults are allowed to inject 2-3 drops. It is necessary to repeat the manipulation 3 times a day with approximately equal time intervals.

Like the original, the substitute should not be used if there is damage to the tympanic membrane, as well as the identification of intolerance to the components of the composition. Otipax is prescribed for children of any age, as well as for pregnant and lactating women. An analogue during pregnancy and lactation is used only according to individual indications and after a preliminary examination. The substitute is also more likely to provoke complications in the form of allergies.

Otipax contains 2 active substances from different groups, it is considered effective, therefore its price is justified. Some cheap analogs can have a similar effect, but at the same time eliminate the symptoms of pathology due to the presence of another component. For example, the drug Cipromed contains the substance ciprofloxacin, which has the main effect. It is also available in the form of ear drops, but has a different mechanism of therapeutic effect on tissues. 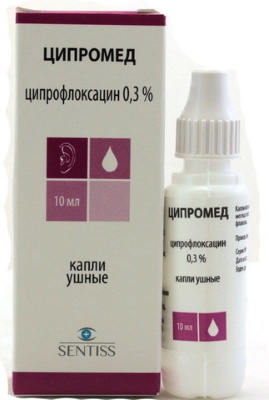 The main ingredient belongs to the group of antibiotics, has pronounced antibacterial properties, helps to eliminate the symptoms of inflammation. When it gets on the affected tissues, it destroys pathogenic bacteria that provoke the inflammatory process. As a result, the symptoms of inflammation are eliminated, despite the fact that the drug does not directly affect the course of the inflammatory process.

The tool helps to fight not only with various forms of otitis media, it is prescribed for trauma to the tissues of the hearing system of varying severity. A feature of the medication is that it is allowed to be used when preparing a patient for intervention with a hearing aid and during the rehabilitation period.

The drug treatment regimen assumes its appointment in courses of 7-10 days with daily administration of the solution 3 times with approximately equal time intervals. 5 drops are injected into each ear canal. Before using the drops, it is recommended to burn to body temperature.

Unlike the original, the substitute has more contraindications for use:

Otipax is not prescribed if the patient has lesions on the eardrum, while the analog can be used in such cases. With substitute treatment, negative reactions develop more often. Patients may talk about itching and burning at the site of application, tissue irritation, headache. Symptoms disappear after discontinuation of treatment.

The more aggressive properties of the analog make it impossible to use it for patients of different ages. and with various disorders, but in some cases it is the preferred option for the patient.

Otipax (cheap analogs, the price of which depends on the amount of solution in the bottle, often contain additional active ingredients) has an effect due to two active ingredients. Many substitutes have a combination formulation that makes them more effective. Polydex contains neomycin, polymyxin and dexamethasone and is available in the form of ear drops. 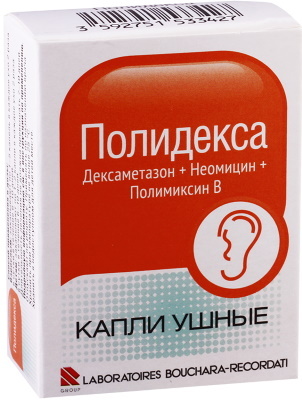 These components provide a pronounced anti-inflammatory, antimicrobial effect. Despite the different composition, the medicine can be used as a substitute. Dexamethasone in its composition is an important component, belongs to glucocorticosteroids, helps to eliminate acute symptoms of inflammation. Neomycin and polymyxin have antimicrobial properties.

The drug is considered more effective in severe disease than the original drug. It can be used for otitis media and otitis externa, diagnosing uninfected eczema of the ear canal. Like the original, drops are not prescribed if the integrity of the ear canal is violated.

The therapy regimen involves the introduction of 2-3 drops of the drug into the affected ear canal 3 times a day. The duration of the therapeutic course is 7 days. Longer courses are usually not required. The drug often provokes complications in the form of urticaria or even Quincke's edema, unlike the original.

That is why it is important to first study the contraindications for therapy:

The long list of contraindications makes the drug more dangerous for patients, despite the high efficiency of therapy. The presence of several active ingredients in the composition is considered one of the reasons for the frequent development of negative reactions when using the medication.

A popular analogue based on lidocaine and phenazone, which has anti-inflammatory and analgesic properties. The drug has the same composition as the original drug, it is produced in the form of ear drops for topical use. The principle of action of the medication does not differ from the influence of Otipax, but the substitute acts more aggressively. The medicine acts quickly, helps to eliminate acute manifestations of diseases, prevents the progression of the disorder.

It is prescribed for the treatment of otitis media and external otitis media. The difference between the analogue is that it is often prescribed when diagnosing a viral form of otitis media, while the original is usually not used. The tool is considered effective, it is used no longer than 10 days. The manipulation is carried out 3-4 times per day, 2-3 drops are injected into each ear canal. 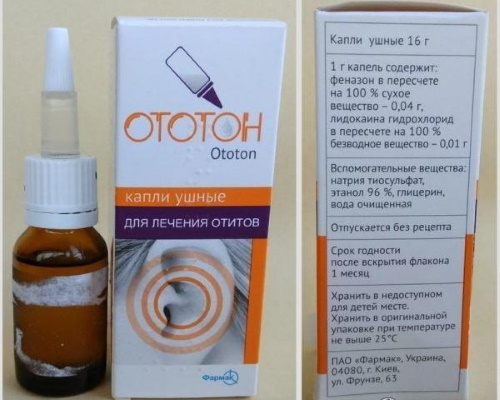 Before instillation, it is recommended to warm the solution to body temperature, which will avoid the development of complications. Like the original, an analogue is not prescribed in case of violation of the integrity of the eardrum or allergies to the components of the solution. In case of infectious lesions of the ear tissues, drops are also not prescribed. Patients note that negative reactions develop rarely with therapy, as well as with the appointment of Otipax. Despite this, the medication is considered effective.

The original medication has a high cost, but some analogues cost slightly less. When choosing, it is important to rely not only on the cost, but also on the properties of the medicine.

The selection of an analogue should be done by a doctor based on the data of a diagnostic examination. Self-use of funds can provoke complications.

Otipax is an effective anti-inflammatory medication for the treatment of pathologies of the hearing aid. The price of the product is high, so patients often select analogues with similar properties. Cheap medicines are not always less effective, but they are used with caution, many have other components in their composition.

Video about the drug Otipax and analogues for children 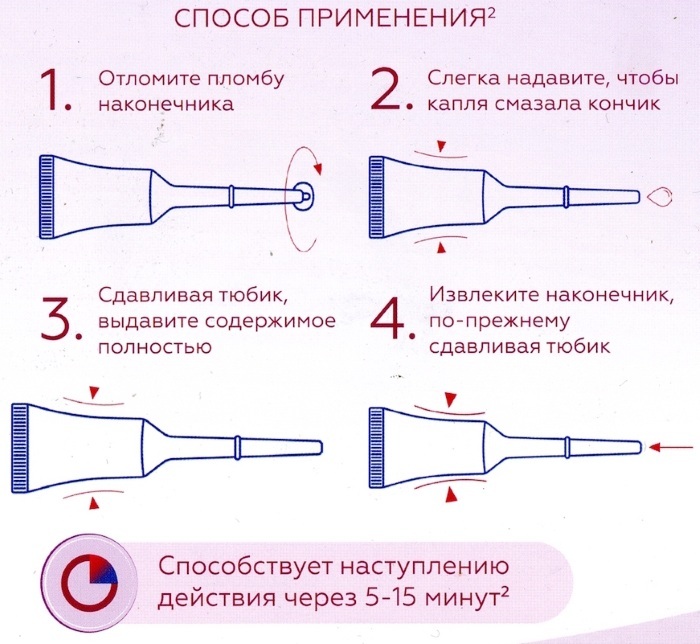 Microlax for newborns. Reviews of doctors Biochemistry of maternal serum in the 1-2-3 trimester. Decoding