Diaphragm in the human body. What is it in anatomy, photo-X-ray of space, where is it, functions

The diaphragm in the human body is called a thin septum, which separates the abdomen and chest. It is needed to expand the lungs. The normal functioning of the digestive, respiratory system, blood circulation largely depends on the diaphragm. For any violations, treatment should be started immediately.

Characteristics and description of the organ

There are more than 400 muscles in the human body. One of them is the diaphragm. It is very large and is needed not only for breathing. The laying of the diaphragm occurs in the third week, by the fourth, a transverse septum is formed, which separates the abdominal cavity and the chest. Then, pleuroperitoneal membranes are gradually formed from the sickle folds on the sides of the body. 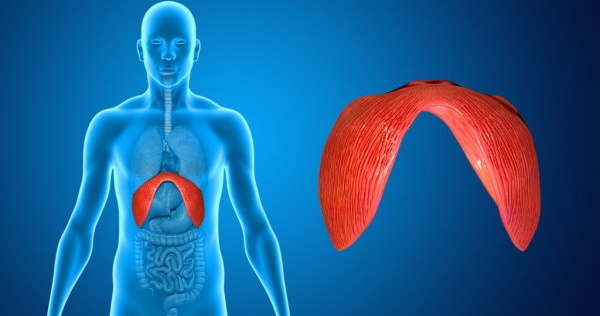 The muscular septum divides the body into two, and its border runs along the edges of the lower ribs. It has the shape of a dome and participates in several vital processes at once. The diaphragm is otherwise called the respiratory muscle. It is considered one of the main parts of the abdominals. The bundles of her muscles are on the periphery, and the center is filled with woven tendons. 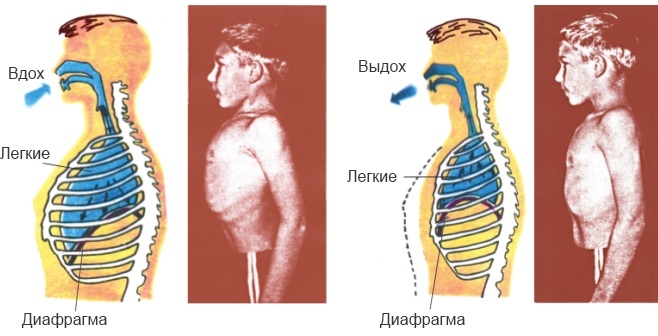 Disruption of the diaphragm is often accompanied by pain, which can radiate to different parts of the body. A simple test will help you understand that the domed septum is not functioning properly. One hand should be placed on the chest, the other on the abdomen. If only the sternum rises on inspiration (or most of it), then this indicates a malfunction of the diaphragm. Normally, both zones should work at approximately the same level.

The diaphragm in the human body performs more than one function, but the main one is participation in breathing. Many other muscles are involved in this process. However, normal ventilation of the lower part of the lungs (up to 50%) is provided by the diaphragm. It acts like a piston, sucking air into the lungs and then pushing it out.

When the muscles in the diaphragm contract, the dome is transformed into a plane. At the same time, the volume of the chest increases, and the intrapulmonary pressure decreases. Air rushes through the respiratory channels to the lungs. The person breathes in and millions of alveoli (bubbles) fill. This slows down the speed of movement of impulses along the nerve fibers, and the diaphragm contracts, again becomes domed. The volume of the chest decreases and exhalation occurs. 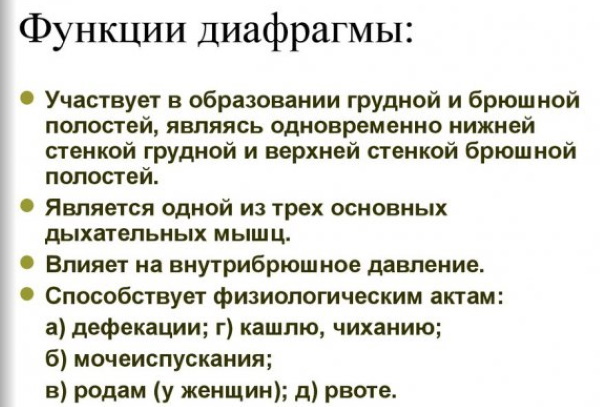 When, during inhalation, the dome of the diaphragm drops, it slightly presses on the liver, bile enters the gallbladder, and from it - into the duodenum. The outflow of venous blood and lymph increases from the abdominal organs. If this process stopped, then liquid and lymph would begin to accumulate in the abdomen, provoking tissue edema and disrupting metabolic processes in the body.

One of the large venous vessels (vena cava) passes through the middle of the diaphragm. There is a large accumulation of tendons. The walls of the vena cava are fragile and easily deformed. But from this they are reliably protected by the tendons, allowing them to expand to the desired size without damage. This ensures normal blood flow through the vessels.

The diaphragm in the human body plays an important role in the blood supply to the heart, reducing the stress on it and the coronary vessels. The plate makes about 4 times less impacts / minute (18).

Lymph flow is of great importance. It passes through the vessels that are located along the esophagus, aorta, and veins. From above, the lymphatic fluid enters through the posterior mediastinal and retropericardial nodes, and from below - through the paraesophageal and paraaortic nodes.

The esophagus, surrounded by powerful muscle bundles, passes through the opening of the septum. Possessing the function of a pulp, they regulate the process of penetration of food, creating a special valve (sphincter). It does not allow food to return from the stomach to the esophagus. A second sphincter is formed in the stomach area. Both are connected and thanks to the diaphragm they work in harmony.

Additionally, it increases abdominal pressure. This helps the body get rid of urine, feces and vomit. Pressure on the esophagus prevents acid reflux. The movement of the muscle plate is controlled by a nerve that runs to it from the neck. With a decreased tone of the diaphragm, the amount of air in the intestines and stomach increases. This can provoke a stool disorder.

The diaphragm in the human body is a muscle-tendon plate. It is located just below the heart and lungs, at the base of the chest. When a person breathes in and out, it contracts and expands, pushing out the air. Its upper and lower parts are covered with fascia and the adjacent parietal pleura. Between them is a looser layer of fiber. The center of the diaphragm is made up of a plexus of tendons. Its thickness is 0.3 cm, and the partition itself is from 0.3 to 0.5 cm. 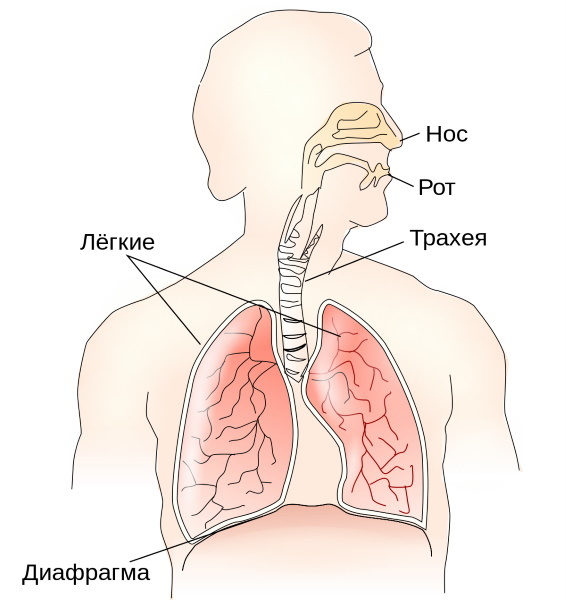 The diaphragm is a domed plate. Its first (convex) fornix is ​​slightly higher and is turned towards the chest, and the lower one is towards the abdominal and the liver is adjacent to it. The left side does not touch the internal organs (except for the spleen and the fundus of the stomach).

The diaphragm is divided into 3 zones, depending on the release of the muscles:

In the center of the diaphragm are the tendons that form a triangle. Several holes for the nerve fibers of the vessels pass through it. Thanks to them, the communication of the parts of the septum and the blood supply to the surrounding tissues take place. 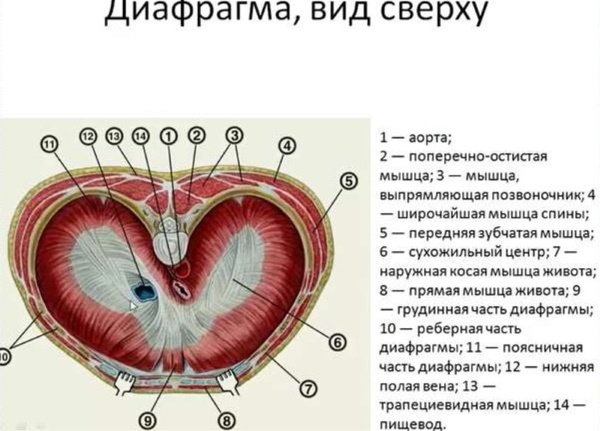 The respiratory muscles have separate attachment sites, but the end point is the same for all - in the tendon center.

The innervation of the muscular dome-shaped septum is carried out with the help of nerves. The diaphragmatic (right and left) ones start from 3-5 roots in the cervical spine and, passing along the anterior scalene muscle, end up in the chest.

The right nerve follows along the brachiocephalic and vena cava, along the atrium and exits through the venous opening of the diaphragm. The left one runs between the subclavian and carotid arteries, through the aortic arch and the superior intercostal vein. Then it stretches along the left ventricle and enters the diaphragm.

Other sensory fibers extend from the phrenic nerves. As a result, when lamellar is irritated, pain can radiate to other places (for example, to the shoulder). Also, the diaphragm is connected to the intercostal nerves. All of them, departing from the ribs, reach the sternum or abdominal cavity through the holes in the septum.

The diaphragm has several types of disorders and diseases. For example, not only immune defense cells, but also infections are carried along with lymph. Therefore, if an inflammatory process has formed in the abdominal cavity, then it can, along with the flow of fluid, spread to the chest and vice versa.

The main symptoms include heaviness in the stomach, irregular heartbeat, shortness of breath, pressure on the chest. Signs of malfunctioning of the plate also include bouts of pain, especially in the chest area.

A rare disease is diaphragmatic flutter. They are often caused by cramps or spasms. During attacks, a person feels shortness of breath, pulsation in the peritoneum, chest pain. As a result, symptoms are mistaken for a heart attack. Some cannot take a full breath.

The diaphragm in the human body can be damaged from the outside. They are of two types. Closed injuries - when severe pressure is exerted on the abdominal cavity due to injury or a fall. Most often, it grows near or near the tendon center, or at the point of transition into muscle fibers. In 95% of cases, the left side of the dome of the diaphragm is damaged. It is also often deformed in the chest area.

Due to strong pressure, the stomach can move into the pleural area, other organs - the spleen, liver, are also shifted. Open injuries to the diaphragm occur when injured (cut, stabbed, gunshot). The patient's respiratory and cardiovascular systems are disturbed, bleeding often occurs. Damage to the diaphragm is accompanied by peritonitis and hemopneumothorax. The main diagnostic method is X-ray, treatment is surgery.

This term is used when there is a displacement of organs from the abdominal cavity to the chest cavity. Dysfunction of the diaphragm and a number of diseases are mainly caused by the weakening of the muscles that surround the holes. As a result, the esophagus can expand significantly and a hernia forms. Axial (sliding) symptoms have no pronounced symptoms.

The cause of the disease can be a genetic predisposition, a sedentary lifestyle (lack of physical activity), age-related changes in the body. Less commonly, a hernia is formed as a result of overeating, trauma, abdominal pathologies. Sometimes it is small, does not cause discomfort, but such an anatomical deviation can provoke a number of complications.

Hernias are divided according to their occurrence into three types - congenital, acquired, resulting from trauma or aggressive factors. Sometimes a false form is diagnosed when there is no pathological sac in the abdominal cavity. Congenital hernias often appear due to underdevelopment of the embryo. At birth, there are areas that are not overgrown, which normally heal quickly.

In total, there are several types of hernias:

But atypical hernia variants are rare. When diagnosing, the volume of displaced parts, organs, the level of filling of empty areas, compression, bends are taken into account. With a hernia, signs appear at the site of localization of the protrusion. Any form of disease can provoke bleeding in the gastrointestinal tract.

The diaphragm, if it was incorrectly formed during intrauterine development, can provoke the development of a congenital disease - relaxation. This is a pathology when the diaphragm in the human body becomes thinner and moves upward with adjacent organs. However, the attachment line remains the same. This disease often occurs due to underdevelopment of muscle aplasia.

If the pathology is acquired, then most often it occurs due to disorders of the nervous system. Then the dome of the diaphragm can be moved or damaged. This happens more often on the left side. But sometimes a type of disease is diagnosed when only one section of the diaphragm is thinned. This usually occurs in the anteromedial zone, on the right. During relaxation, the lung is compressed from the side of the affected area, and the mediastinum moves in the other direction. 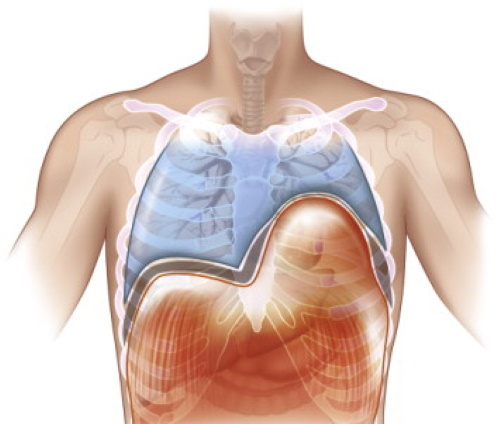 Sometimes there is a volvulus of the stomach or similar pathologies at the site of the bend, near the spleen. Relaxation on the right is more often asymptomatic, on the left - the signs are similar to a hernia, but without the risk of impingement, since there is no gate. With small hernias, symptoms are usually not observed and therapy is not required. Medication can sometimes help. If the hernia is large, then the treatment is carried out surgically.

The diaphragm (damaged, deformed, weakened) in the human body can only be checked through instrumental diagnostic methods. The main method is X-ray examination. Often, the symptoms of disorders and diseases are very diverse and can be confused with signs of other pathologies. With small deviations in the work of the diaphragm, treatment is not required, severe cases are rare.

Video about the diaphragm in the human body

Human diaphragm: The meaning and function of the diaphragm: Diet for polyneuropathy of the lower, upper extremities 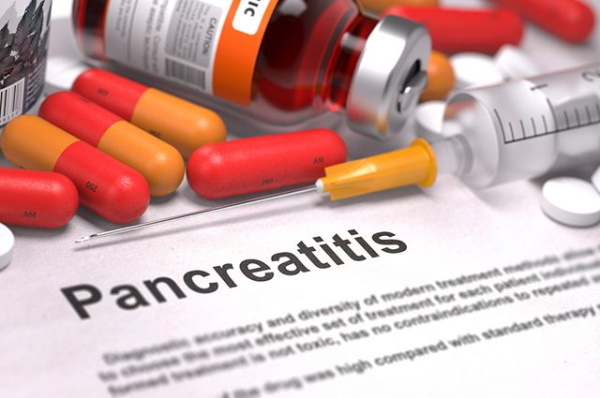 ContentIn what form of release are drugs used to treat chronic pancreatitis?What groups of medicines can be used for pancreatitisAntispasmodicsEnzy...