Thanks to the famous doctors of antiquity, Hippocrates and Galen, a classification of the properties of the human psyche appeared in psychology according to 4 types of temperament. In addition to the sanguine, phlegmatic and choleric, there is a melancholic in the typification of Hippocrates.

After the introduction by Academician I. NS. Pavlov of his own typology, this type of temperament in psychology is considered to be weak and unbalanced. The study below will acquaint you with a more detailed description of the melancholic psychotype.

Psychologists call a melancholic person a person with an inert variety of temperament and a weak nervous system. This category of people has a high sensitivity, emotionality, anxiety. Such qualities make it possible to attribute melancholic people to the group of introverts - calm and slightly slow individuals living in their own inner world.

Melancholic people react to life situations depending on the characteristics of their own temperament. For example, if a sanguine person calls an event an interesting incident, then a phlegmatic person will evaluate it as an undeserving fact, and for a melancholic the same situation turns into a tragedy. 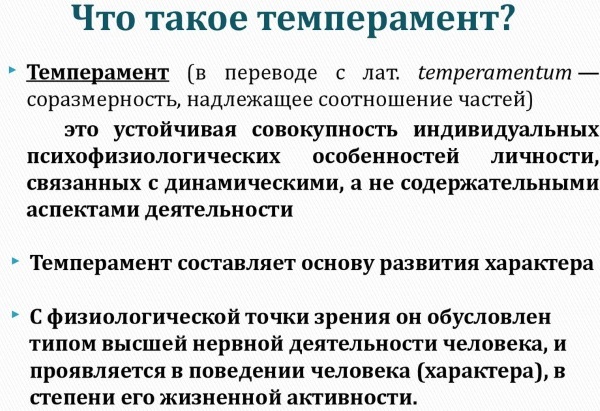 Since ancient times, representatives of the psychological trend in science have tried, in the spirit of their time, to put forward a definition of the melancholy mindset. Later, in the army of psychologists, there was a division in directions, as a result, participants in different schools expressed their point of view on this issue. 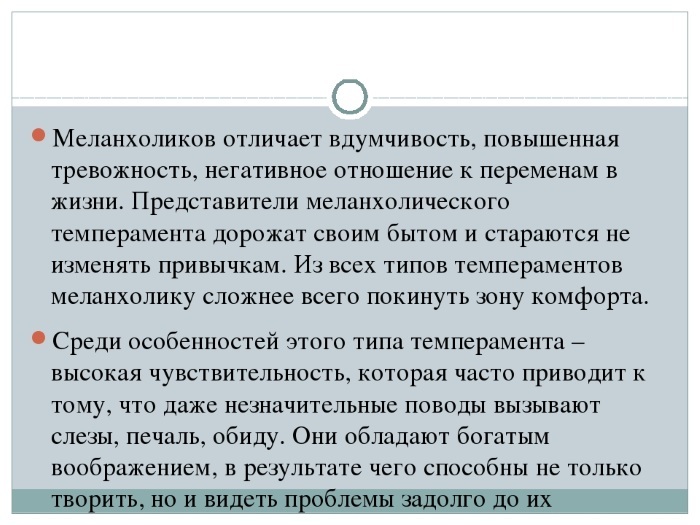 Outwardly, the melancholic looks like a fragile subject with an asthenic physique, extended limbs. The back and chest are flat, the waist is narrow with underdeveloped muscles. A person with such a temperament is extremely vulnerable due to constant secrecy and suppression of emotions, and the events of the surrounding reality are perceived by him in a gloomy manner.

A melancholic is a closed and silent personality in psychology, prone to sadness, which leads to the development of prolonged depression. However, psychological weakness does not affect physical endurance, its degree is quite high.

Melancholic traits in a child are manifested much more clearly than in adults; children with a similar temperament are very curious, open to learning new things. Due to their own insecurity, they do not show much activity, they grow up withdrawn and shy.

At school, a melancholic child studies well, his behavior is exemplary, but not devoid of fussiness. Children do not boast of their knowledge, they do not show initiative even in conversation. The desire to learn persists throughout the school period, but it is important for teachers to choose the correct tactics of relations with such a student - not to rush him, not to call him to the blackboard. 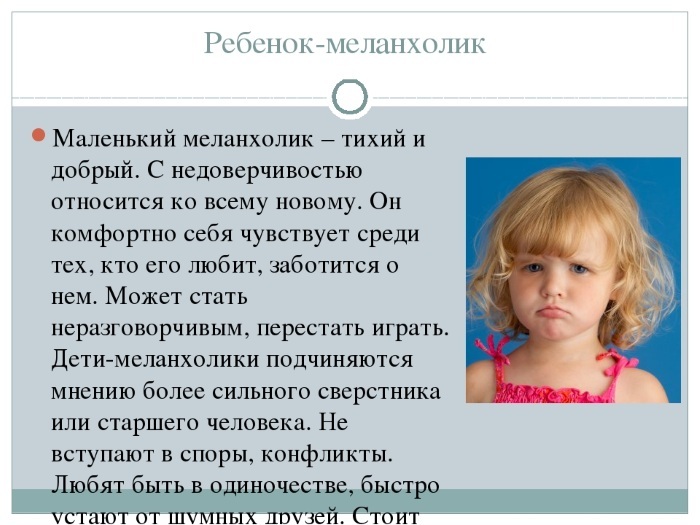 Despite the fact that students who are prone to melancholy master the general education program quickly, they do not tolerate criticism, especially humiliation. Parents should not forget about encouraging the student so that, due to his insecurity, he does not abandon his studies and does not withdraw into himself.

The melancholic child has very few real friends because of the categorical rejection of publicity. Children with a similar temperament prefer solitude, never get to know each other first, it is difficult to join the peer group, and the tendency to stay at home turns into a loss of friends.

Although a melancholic child cannot become a leader, he values ​​friendship and enjoys authority among his peers. They are the most devoted friends since childhood, impressionable and deeply empathic.

A melancholic in childhood is a very shy and indecisive person, crying and frightened by strangers. Children of a melancholic disposition are drawn to strong and active people who can protect a vulnerable nature. Melancholic adolescents are wary of not only their surroundings, but also people, they need the support of their relatives. 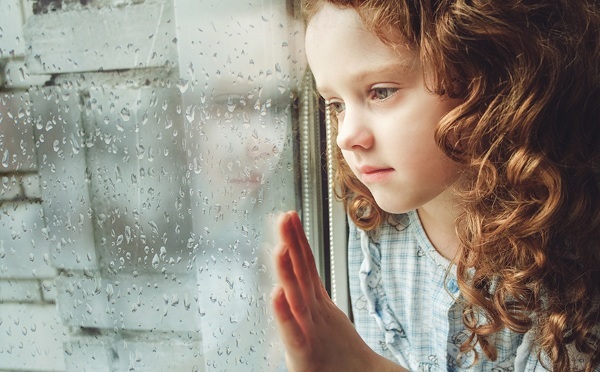 Extreme susceptibility to peer and adult assessments increases the likelihood of a child falling under someone's bad influence. In the event of bullying in the children's collective (bullying), the student will not share the problem with the parents, and their attempt to clarify the situation will lead to a deeper immersion in their own "cocoon".

A melancholic is psychology that dislikes changes, but serious and punctual people. Such pedantic men, scrupulously fulfilling their duties, are not often found.

In family and love

For a melancholic man, physical intimacy is not as important as the emotional understanding of a partner.

A person with an enviable constancy of character is faithful to this word, for his second half will become a reliable protector, will give the chosen one with expensive gifts. However, due to low self-esteem and increased sensitivity, such individuals are prone to the destruction of romantic relationships.

Individuals do not make frivolous acquaintances, prefer the stability of relations, but are often monogamous. To build a strong family, they need an emotional partner with a refined nature.

Intelligent melancholic people become sensitive and caring husbands, kind-hearted but demanding fathers. Hidden romantics value family more than anything else, submissively obeying their wife, and protecting their relatives from any dangers.

Men of the melancholic type are characterized by a feeling of unrecognition, they suffer from the constant feeling that their colleagues underestimate them.

Therefore, it is extremely rare to become bosses, giving preference to the posts of a subordinate in the following professional areas: 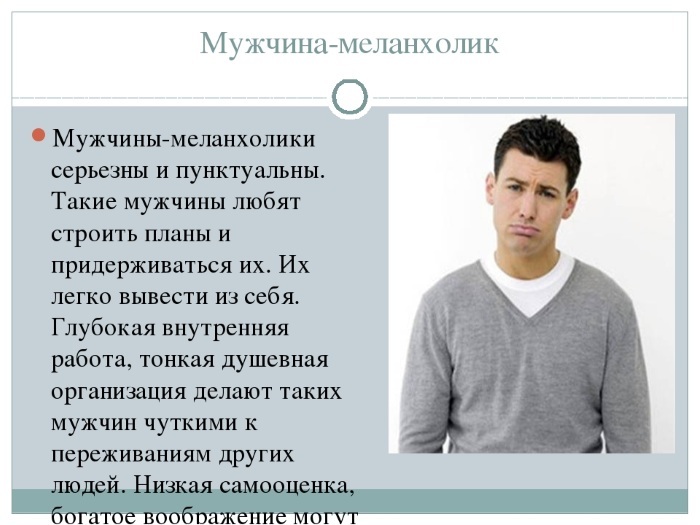 The melancholic personality reacts painfully to criticism. Therefore, the boss of a man with a similar temperament should not demand a fast pace of work from an employee, not burden him with responsibility, not force him to work for a long time without interruption. Only then can one expect creative solutions, accurate calculations, and the assimilation of new material from a melancholic employee.

Choosing a friend, you need to take into account the subtle mental organization and high vulnerability of a melancholic man. He will acutely perceive the events taking place around him, and he will have to communicate with him very delicately so as not to hurt his sensitive soul.

A sentimental representative of this psychotype should be treated gently and loyally, not criticized, but try to arouse sympathy in him in a confidential conversation. Then you can count on good advice, because a well-developed intuition allows a humble sufferer to express prophetic thoughts.

Among women, natures prone to melancholy are found more often than among the stronger sex. It is not difficult to recognize her by her calm thoughtfulness, a tendency to prolonged reflection and thoughtfulness.

In family and love

A melancholic in the guise of a woman is overly sensitive and easily injured people. Due to constant sadness, reality in her psychology often does not correspond to romantic dreams. Representatives of this type do not tolerate any kind of clarification of relationships, as well as conflict situations, which for them turn into prolonged depressions.

In a close relationship with the opposite sex, a romantic woman adheres to special tactics: 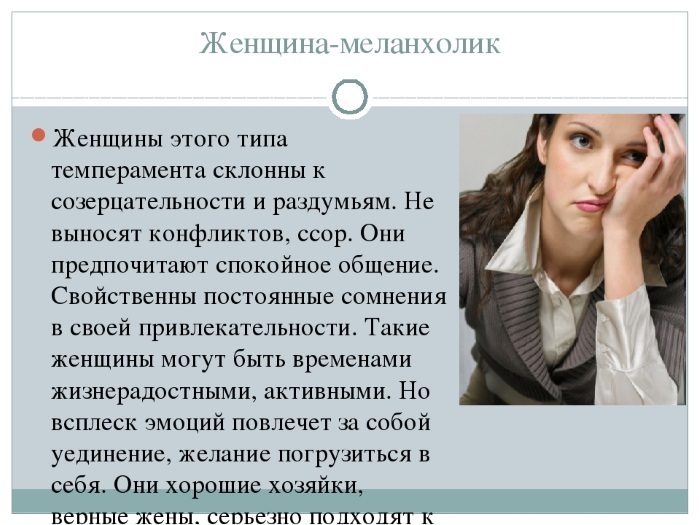 The tendency to complexities, self-criticism, deep introspection leads to doubts about their own attractiveness, makes them constantly please their husband. Kind-hearted mothers cannot stand crying children, despite their exactingness, they try to give their child all the best.

Excessive softness, as well as excessive criticism, becomes the cause of problems with children.

Calm female natures, immersed in internal introspection, are suitable for professions that are not associated with responsible assignments. The main thing is that at work the librarian, nurse, writer overwhelmed with melancholy should be provided with comfortable conditions - a calm work schedule with short breaks.

A melancholic woman does not seek to become a boss; she is a diligent performer with a developed ability for empathy (sympathy, empathy). He prefers individual work in a small team, but does not tolerate intrigues and conflicts.

Representatives of a melancholic psychotype strive for solitude, which friends should actively prevent, otherwise depression cannot be avoided. Sad girls do not like noisy and crowded corporate events, and they hide violent emotions deep inside.

Friends, who are very few, should not yell at a melancholic friend, criticize her or accuse her, it is better to tell her a sentimental story to arouse sympathy. A notorious friend will inflate her own sorrows to such an extent that the problems of all her friends will drown in them. However, the prophetic words of a friend are still worth listening to.

Among people with a melancholic temperament, there are many celebrities of the past and present:

Due to excessive suspicion and rancor (without active revenge), people obsessed with melancholy often remain lonely. However, in the case of creating a family, family heirlooms and traditions are kept anxiously.

The fundamentals of human health are closely related to the characteristics of the nervous system, and in melancholic people it is extremely vulnerable. The result of poor resistance to stress is the emergence of a whole bunch of diseases.

In people with increased emotionality, the cardiovascular system is more likely to suffer, which leads to a high percentage of strokes. Fastidious melancholic people with reduced appetite need long sleep and proper rest, and problems with the bronchi and lungs often end in asthma.

The typology initiated by Hippocrates and improved by modern psychologists cannot be considered a dogma. In a "pure" form, the designated types are not found, therefore combinations of psychotypes are not always pleasing with positive results. 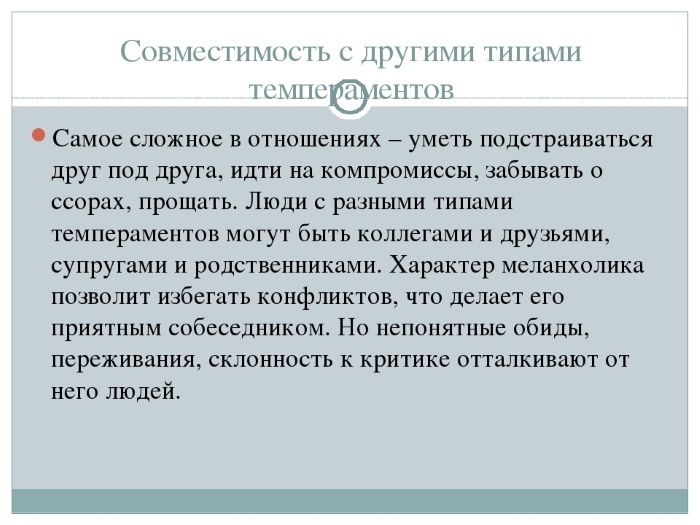 A melancholic is an impressionable and fastidious nature in psychology, suffering from depressive conditions.

The benefits of a melancholic temperament include:

Natural born psychologists are able to quickly identify the emotions of the interlocutor by recognizing pretense. This is useful not only in relationships, but also in business, and high emotionality allows you to realize the fullness of feelings.

Among the traits that make life difficult for someone with sad eyes are several side effects that guarantee positive qualities. 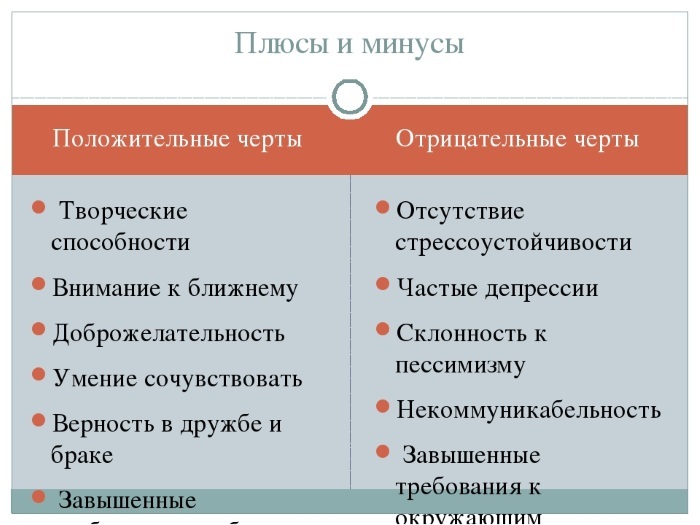 The result of striving for excellence in all respects is the impossibility of achieving a self-created ideal. The melancholic perceives light criticism as an insult, and perfectionism turns into a conflict.

To assess the personality traits, to determine the dominant type of mixture of temperaments and the ratio between them, only a visual examination of the patient is insufficient. For an in-depth assessment, psychologists have a selection of questionnaires to determine the characteristic properties of the human nervous system.

Hans Eysenck's questionnaire consists of a series of author's polls, this is the most reliable test. In the test configuration, there are two internal scales - extraversion-introversion and neuroticism. The result of the intersection of characteristics clearly shows which of the 4 psychotypes the subject belongs to.

Questionnaire V. Rusalova allows you to diagnose the properties of temperament by psychomotor, intellectual, communicative personality traits. Thanks to the ratio of the degrees of expression of characteristics, the variant of the individual psychotype (basic, mixed, indefinite) is clarified.

Jan Strelyau's questionnaire was created on the basis of the author's theory of a psychologist. Temperament is determined by 3 main characteristics of nervous processes - the strength of excitation, inhibition, and mobility. The later technique is reinforced with additional measurement criteria.

You can determine your type of temperament for free using tests presented on sites on the Internet. After answering several dozen questions, the user receives a detailed explanation of the features of his psychological type. For a consultation with a specialist in a psychological center, you will have to pay 1500-6370 rubles, moreover, for an hour of his work.

If we briefly characterize the psychotype, then the melancholic is a very vulnerable person, in psychology this term refers to especially impressionable individuals. The depth and strength of their inner emotions are hidden inside, which does not prevent them from becoming devoted friends for sincerely loving people. 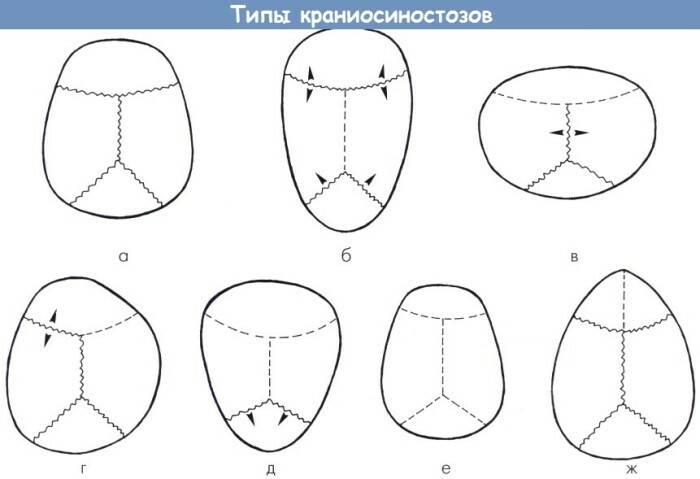 Metopic suture on the forehead in a child, craniostenosis in children. Rate, treatment

Heaviness on the left under the ribs after eating in front, side, back. What is it