Understanding ankle anatomy, consisting of bones, muscles, ligaments, is important for the correct diagnosis and choice of treatment.

The ankle is a complex joint made up of three bones, cartilage, tendons, and the lining of the joint. Functionally, it is a hinge joint that provides dorsal and plantar flexion of the foot. Although it has some side-to-side movement, most of this movement is performed at the joint below, which is called the subtalar joint.

The ankle is full of muscles and ligaments that give it strength, flexibility, and range of motion.

Ligaments are tough connective tissue made up of collagen fibers arranged in parallel bundles that increase the strength of individual fibers. Collagen bundles are attached to the outer covering that surrounds the bones. Ligamentous tissue has low vascularity, or poor blood supply, which slows down its healing compared to other types of soft tissue.

Ankle ligaments, the anatomy of which lies in the fact that they are the connecting link between the articular bones, very strong, flexible and resistant to damage when stretched or squeezing.

The ankle joint and the ligaments involved with it can be visualized as a ring in the coronary (vertical) plane: 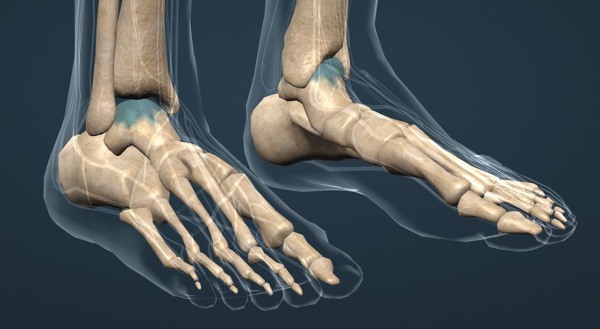 The lower leg bone, lower leg, is another link. The ligaments of the knee joint form another link connecting the femur and tibia. As in a chain, individual links can move freely, but they must remain consistent and cannot be disconnected, which is what the ligaments are responsible for. This allows the joint to move, preventing it from moving.

The ankle joint is the most important part of the body, as it supports the hinge joint between the leg and foot formed by the ankle, subtalar and tibial joints. Ligaments help them in this, and all structures together constitute a large working block.

Between the tibia bones are the tibiofibular ligaments, on the inside there is a large deltoid ligament, on the outside - the talofibular and calcaneofibular. They are composed of collagen and elastic fibers, thanks to which they stabilize the joint and at the same time allow it to perform complex movements.

The tibia, talus and fibula, articulating, represent the structure of the ankle. They slide and rotate relative to each other. They are surrounded by a thick lubricating coating - the joint capsule. It retains synovial fluid, which, together with the smooth cartilage lining the ends of each bone, allows the ankle to move with very low friction. 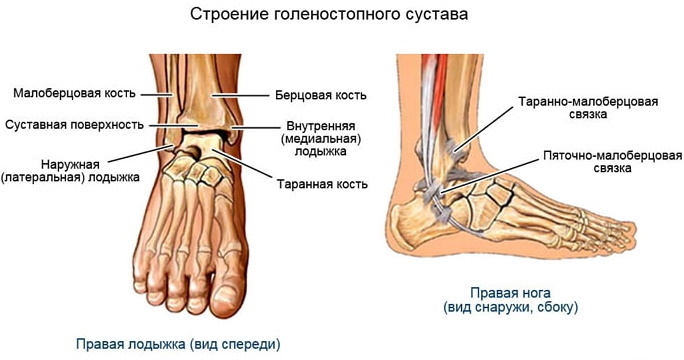 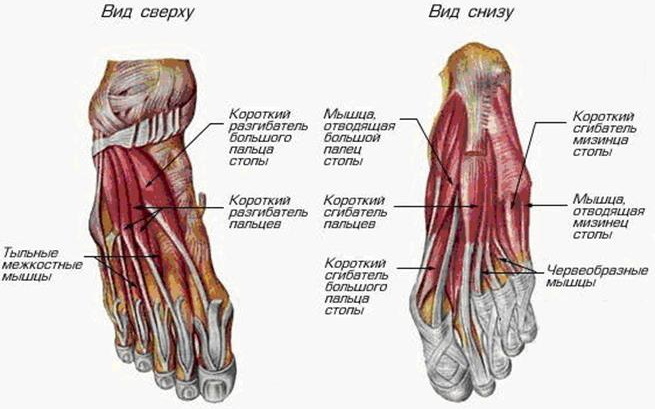 There are five of them on the inside of the ankle. There are also 4 ligaments that connect the two bones of the leg together, the tibial and the fibula. This compound is called syndesmosis. Syndesmosis is technically considered a joint, but is actually formed by the ligaments that support the stability of the ankle joint.

The main ligaments involved in the ankle joints are:

Ankle ligament injuries occur whenever any of them goes beyond elasticity.

The anatomy of the ankle ligaments is important for proper diagnosis. Joint injury is the most common cause of acute ankle pain. Chronic pain is caused by weakness in one of the ligaments in this area.

External ligament injuries occur when the foot turns downward and inward and the ankle twists outward. These injuries are among the most common types of injuries. If the ligament is over-rotated, it can partially stretch or rupture completely.

Violation of the integrity of the ligament in the ankle joint occurs due to twisting of the ankle in accidents or during sports. First of all, the external peroneal ligaments are affected. The second most common tear occurs in the area of ​​the calcaneal ligament, which connects the fibula to the outside of the heel.

Ankle ligaments, with complex connections and interactions in the anatomy, can rupture as a result of injury. In places where the integrity of the fibers is broken, isolated closed ruptures are more common.

In medicine, there are 3 degrees of disruption of the connective tissue that holds parts of the skeleton:

Soreness and immobility are signs of rupture, indicating a serious problem. A popping sound is often heard when the fibers break. In cases of severe damage, the pain is sudden and severe enough, the leg becomes motionless. If hematomas, swelling appear, the victim should immediately seek medical help.

Therapy depends on the degree of damage to the connective tissue.

As a rule, conservative treatment with 4-6 weeks of immobilization in an orthosis is sufficient, which includes:

In the event of a complete rupture of the ligaments, when treatment and rehabilitation are ineffective, surgery may be required. If ligament replacement is planned, ankle arthroscopy is performed in advance. The doctor checks the cartilage and removes the stuck ligament residues.

Ankle ligaments (fiber anatomy is of great clinical importance) can become chronic inflammation with frequent ruptures. In this case, an operation is performed on the ligamentous apparatus. Recovery occurs after 2 months, and postoperative treatment is carried out by methods of conservative therapy.

There is always the possibility that the joint will not fully recover. In such cases, the victim will need a bandage or other support during physical activity.

Stretches occur when the foot is suddenly twisted and the fibers of the connective tissue are overstretched. This most often occurs in the outer part of the foot. 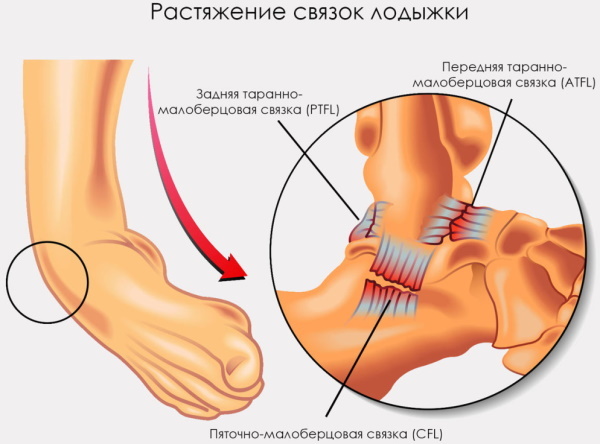 Stretching of the internal ligaments is less common.

Injuries are classified according to the position of the ankle at the time of the injury, the direction of the fall of the body, the type of footwear, the activity at which the injury occurred and the force with which it occurred. There are cases when different types of injuries are combined.

There are 3 main categories of ligament injuries:

Stretching is characterized by the following symptoms:

Risk factors for the development of sprains and deformities of the ankle joint:

Patients with grade 1 or 2 sprains sometimes need to take NSAIDs such as Ibuprofen, Acetaminophen, which reduce inflammation and relieve pain at the same time.

Ankle ligaments (the anatomy of which differs from the structure of the tendons) during stretching are successfully treated with ointments containing menthol, petroleum jelly: Diclofenac, Voltaren, Emulgel. Grade 3 sprains and strains are usually unstable and require longer healing time.

The following treatment protocol is used:

For severe or chronic sprains that do not respond to first-line treatment or rehabilitation, one or more types of surgery may be required:

After the operation, additional time will be required for recovery and physical therapy, the classes of which stretch out for several months. Some patients with severe or chronic sprains are unable to return to their previous level of activity.

Ankle ligaments (the anatomy and functions of which have an inhibitory and directing effect) sometimes do not recover well after surgery associated with the plastic of damaged fibers. Patients with extremely painful grade 3 sprains or those recovering from surgery may also receive strong or weak pain relievers.

Since the ligaments are intercellular connective tissue with a very small number of cells, nerves and blood vessels, their diseases are mainly associated with inflammation, autoimmune diseases and infections.

In an inflammatory process, the body repairs damaged tissue and fights infection. When the body undergoes an inflammatory response, blood begins to actively enter the damaged area, bringing in nutrients and immune cells.

But the nature of the ligamentous tissues, dense, with limited blood supply, leads to the fact that this process causes damage due to swelling and prolonged degradation of the tissue. All this further damages the ligaments. They become susceptible to injury and stretch easily under normal physiological conditions.

Some diseases associated with a malfunction of the immune system affect the connective tissues and the ligaments are affected. Rheumatoid arthritis, mixed connective tissue disease, polychondritis, systemic lupus erythematosus and scleroderma, all of these autoimmune diseases lead to damage to the ligamentous tissue.

Infection of the fibrous tissues of the ligaments occurs directly through wounds or internal infections. Direct infections of mating are rare. Bacteria, viruses that cause necrotizing fasciitis, or bone infections can affect the ligaments and, although rarely, pose a serious threat to these structures. Most often, an infection of a joint or adjacent tissue causes an inflammatory response in the ligaments and tissue damage.

Some diseases indirectly affect the damage to the ligamentous apparatus. With tendinitis, fibromyalgia, osteoarthritis, connective tissues, joints or muscles are affected.

Proper ankle mechanics requires not only muscles, but also the ligaments that hold the bone structures together, as well as the tendons that attach the muscles to the bones. Knowledge of anatomy, recognizing musculoskeletal problems before they develop into serious injuries, is the key to an active, pain-free life.

Video about the structure of the ankle

Anatomy of the foot. Joints and ligaments:

Omeprazole: instructions for use, real prices

Omeprazole - current medications used to treat ulcers and erosions of the upper GI, including inflammatory disorders. Omeprazole has an inhibitory...

Pericarditis: Symptoms and Treatment. How to treat pericarditis in adults

Pericarditis - an inflammation of the pericardium, the outer lining of the heart that separates him from the other organs of the chest. The perica...

Chickenpox in children: photo, symptoms and treatment at home. How to treat chickenpox correctly: Komorowski

Chickenpox or chicken pox - an acute infectious disease caused by the herpes family of viruses. A distinctive feature of chickenpox - a rash on th...