Adrenal problems can have serious health consequences for women, as they are involved in the regulation of many functions in the body. Common diseases of the endocrine gland have their own causes, symptoms and require specific treatment tactics.

The structure, function of the adrenal glands

The adrenal gland is a very small endocrine gland, weighing about 6 grams, located at the top of each kidney - a kind of "crown".

Each gland consists of a cortex, which is 2/3 of the size of the organ, and the inner part, the medulla or the nucleus of the gland. The adrenal cortex has the ability to absorb and produce cholesterol.

The cortical layer or mantle is divided into 3 parts, and each produces hormones: 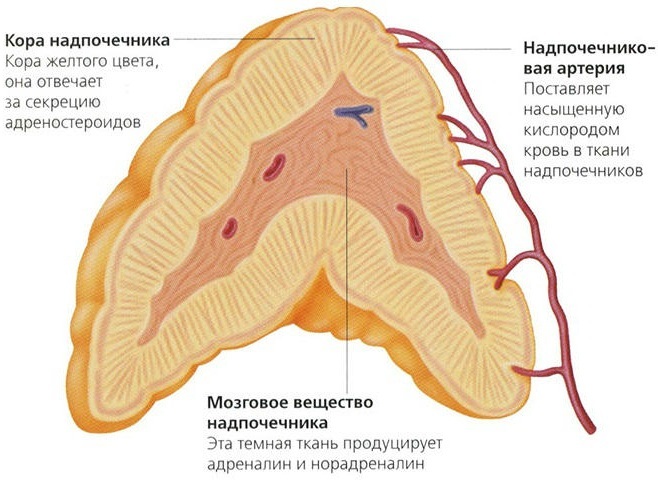 The adrenal nucleus - the medulla - mainly secretes the hormones adrenaline and norepinephrine. They are able to increase heart rate and strength, blood flow to muscles and brain, relax airway smooth muscles, and promote glucose (sugar) metabolism. They also control the constriction of blood vessels, helping to maintain blood pressure and raising it in response to stress.

Adrenaline and norepinephrine are activated in situations of physical and emotional stress, when the body requires additional resources and energy to withstand unusual stress.

Adrenal problems (symptoms in women with some diseases are identical to those of men) create hormonal imbalances and affect health.

A woman's body is largely dependent on hormones. First, menstruation is regulated by them. Secondly, the state of the woman's endocrine system depends on them. This is an important component that affects a woman's ability to get pregnant. The main female hormones are progesterone and estrogens.

The main types of adrenal diseases and their symptoms, causes of development

Adrenal problems (symptoms in women often include weight loss) affect women's health. Dysfunction is caused by various diseases of the adrenal or pituitary gland. Symptoms of adrenal gland involvement tend to be mild at first, but tend to get worse and more frequent over time.

The disease develops due to excessive secretion of aldosterone. It has a primary and secondary stage of development, arises as a result of a tumor or hyperplasia of the adrenal gland itself. Patients may have high levels of aldosterone, low levels of renin and potassium (hypokalemia).

A clinic developing in a patient is characterized by:

Insufficiency of the adrenal cortex

When the adrenal cells responsible for the secretion of hormones degenerate as a result of changes in the glandular tissues of the organ, chronic failure occurs.

There is a decrease in the secretion of hormones, certain symptoms appear:

But since a person has 2 adrenal glands, if one is completely damaged, the other gland will begin to secrete additional hormones, which compensates for the dysfunction of the affected gland.

A tumor that develops in the medulla of the endocrine glands, contributing to the excess production of adrenaline or norepinephrine. Tumors are benign in 90% of cases, but cause many symptoms, including high blood pressure, heart palpitations, sweating, headaches, shortness of breath, and pale skin. Some patients lose weight dramatically, experience latent anxiety, and develop constipation.

Problems with the adrenal glands (symptoms in women, as well as in men, can occur at any age) sometimes manifest themselves as a rare pathology. Addison's disease, or primary adrenal insufficiency, is an autoimmune disease that develops when the adrenal glands are unable to produce enough cortisol, or aldosterone. It is a self-destructive disease in which the immune system attacks adrenal tissue. 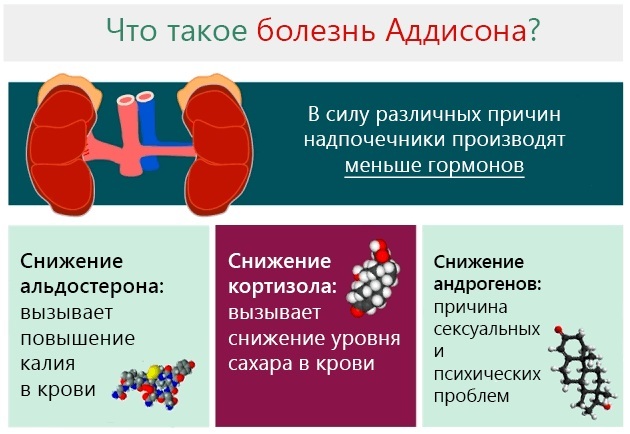 How does the disease manifest itself:

A disease in which there is an excess of cortisol in the body. The main reason is the failure of the hypothalamic-pituitary structure. It is often accompanied by high mortality if the disease is not properly diagnosed and treated effectively. Conventional treatment includes surgery to remove the adrenal adenoma, and in cases where there is no improvement after surgery, radiation sessions or adrenal resection are performed.

Signs of Nelson's syndrome are due to the increased growth of adrenocorticotropic hormone and the pressure of the tumor on the surrounding structures, which interferes with the release of other pituitary hormones. This occurs after removal of the adrenal glands in Itsenko-Cushing's disease. The disease is characterized by glandular insufficiency, hyperpigmentation of the skin, mucous membranes and the presence of a pituitary tumor.

Tuberculous adrenalitis is the result of an adrenal infection caused by Mycobacterium tuberculosis.

Symptoms of adrenal insufficiency that appear in women are most often expressed in the form of fatigue, abdominal pain. In the future, if> 90% of the cortex is affected, a serious problem may appear - an Addison crisis, which is life-threatening.

Inflammation often develops against the background of lesions of the cortex after tuberculosis. Symptoms of inflammation occur only when most of the cortical cells have already been destroyed, and the remainder can no longer compensate for the production of hormones.

A characteristic symptom of the disease is darkening of the skin. A lack of cortisol leads to decreased performance, weight loss, and gastrointestinal complaints such as nausea or vomiting. Aldosterone deficiency leads to a decrease in blood pressure and an increased need for salt, an imbalance in the balance of blood electrolytes, sodium and potassium ions.

Hyperplasia of the adrenal cortex

In this case, there is an overgrowth of one or all 3 layers of the adrenal cortex. Hyperplasia can be congenital or acquired. 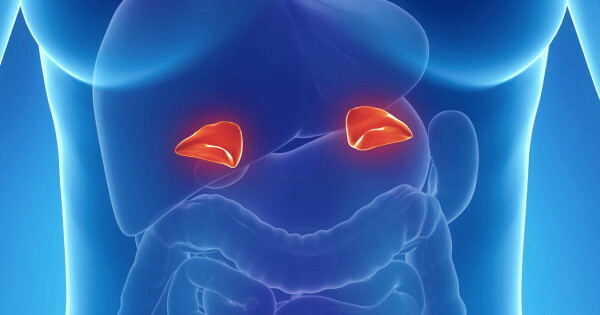 The first is the result of improper cortisol biosynthesis. Acquired hyperplasia results from an increased release of adrenocorticotropic hormone, such as from a pituitary adenoma or Cushing's syndrome.

An abnormal cavity in the adrenal gland tissue is a unilateral lesion usually found incidentally during imaging or surgery.

There are 4 categories of cysts:

Treatment is only required when the cyst is showing symptoms. Detailed computed tomography is done to determine the number of cysts and also to determine their exact location. Surgical removal is recommended for cysts at risk of transformation into malignant tumors.

Most types of adrenal tumors are benign. They usually do not cause symptoms and do not require treatment. Malignant ones are rare.

There are two main types of adrenal cortex tumors:

Adrenal problems (symptoms in women almost always include feeling tired, irritability) in the form of cancerous tumors are accidentally discovered during imaging performed in search of other diseases.

Symptoms appear when the growths become large and press on other abdominal organs, causing pain or a feeling of bloating. Typically, adrenal cancer is much larger than an adrenal adenoma. A tumor larger than 5-6 cm is considered cancer.

Not all cancers found in the adrenal gland originate from the gland itself. Most are metastatic or spread by cancer from a primary tumor to other organs or tissues. For example, lung cancer, melanoma, and breast cancer often spread (metastasize) through the bloodstream to the adrenal glands. When other cancers have spread to the glands, they are not considered adrenal cancer. They are named and considered depending on where they started from.

For all diseases of the adrenal glands, the diagnosis is made by an endocrinologist on the basis of:

In addition, laboratory tests are performed to measure cortisol levels, ACTH levels, and other hormones associated with the glands. If a tumor is suspected, a biopsy and various imaging tests, such as CT, MRI, will be required.

Hormone replacement therapy is given if adrenal gland function is found to be low, such as that caused by Addison's disease. In the case of various tumors, benign or malignant, surgery, chemotherapy, radiation and hormone therapy are often required. In the case of genetic diseases, treatment is symptomatic.

The basis of medication treatment is the restoration of hormonal levels. For this, drugs containing synthetic hormones are used.

At the next stages, antiviral, antibacterial drugs are prescribed to reduce and eliminate negative factors affecting the work of the adrenal glands. If necessary, vitamin supplements are prescribed.

The adrenal glands produce various activating hormones and substances (neurotransmitters). They prepare the body for stress and stress. If adrenal function is weakened, the body reacts sluggishly to cold, hunger, toxins, illness, or physical and mental stress.

Micronutrient medicine employs 3 strategies in nutritional supplementation: first, to reduce stress, secondly, to mitigate the effects of stress and, thirdly, to strengthen the adrenal glands so that they can again produce hormones.

The following nutrients are recommended:

Surgery is the main treatment option for pheochromocytoma, a tumor of the adrenal medulla that produces excess catecholamines. Surgery is the removal of a tumor and, if necessary, some of the surrounding healthy tissue during surgery.

Why are adrenal diseases dangerous, consequences and predictions

The prognosis for adrenal inflammation with concomitant adrenal insufficiency is good. Sick people do not have a reduced life expectancy, and they can continue to live and work normally. It is important to take the medication correctly to mimic adrenal function as much as possible. Regular check-ups with a doctor are equally important to determine if any medication adjustments are necessary.

The quality of life of men and women in particular directly depends on the state of the endocrine glands. In general, adrenal abnormalities are usually rare. But if problems have arisen, alarming symptoms have appeared, you should discuss them with your doctor in time.

Myasthenia gravis - is the most common autoimmune disease characterized by lesions of the neuromuscular synapses, due to the generation of autoant...

pancreatitis 21Is it possible to have sweet or bell pepper stuffed with pancreatitis Pancreatitis - is an inflammatory process that attacks the pan...

Abnormal heat: how to help yourself in hot weather?