The level of claims. What is it in psychology, definition, what is it characterized by, Schwarzlander's method

In modern psychology, the concept level of claim (abbreviated UE) personality is a striving for a specific goal of the level of complexity that the person considers acceptable for himself. This term was first introduced by Kurt Lewin back in the 1920s. He is a famous psychologist and creator of social psychology, which is still used today. He was the first to suggest that if a person has a realistic level of aspiration, then he is confident enough, persistent and easily achieves his goals.

It is believed that in this case it is much easier for people to work more productively compared to those who have inadequate or low aspirations. If there is a serious gap between claims and what a person is really capable of, then this leads to incorrect self-esteem, and, accordingly, behavior, psychological state.

This can lead to emotional outbursts, the development of increased anxiety. Accordingly, we can conclude that the indicator of aspiration is very strongly intertwined with a person's self-esteem, ambition, and also motivation to achieve a certain success.

The level of aspirations is a concept in psychology that is often confused with self-esteem. Although these two personality characteristics are closely related and dependent on each other, they are different. In simple terms, the level of aspirations is the bar that a person adheres to in his behavior, work, relationships and any other types of activity. That is, this is the level that a person sets for himself.

The higher a person's self-esteem, the more, in his opinion, he is able to achieve. However, you need to understand that UP is a rather subjective concept that is far from always able to determine reality. The problem is that if a person has too high self-esteem, then although this raises the bar for future goals, it does not allow him to really achieve success. Such disappointment has serious consequences.

In his works, Levin very clearly analyzed the concepts, as well as the definitions of his theory, regarding the level of claim. He highlighted several main aspects. 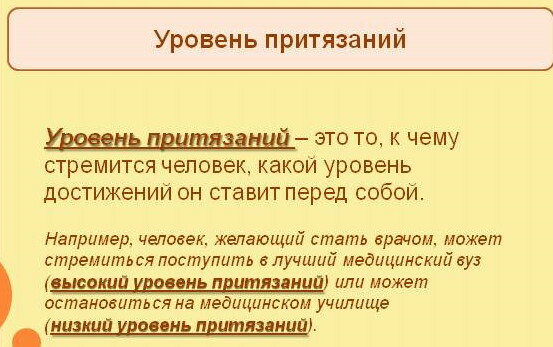 It is worth clarifying that in practice there can be much more such reactions. For example, there are a lot of situations when a person with a clearly low self-esteem achieves any success, but he does not raise the bar for himself, but continues to move towards similar goals. The opposite also happens, when a person suffers a defeat, but continues to raise the bar, because he believes that in this case he will be able to "starve out" and, thanks to perseverance, will receive everything he wants.

The level of aspirations (this is a relatively new concept in psychology) is assessed in several categories. For example, it can be adequate or inadequate (in turn, it can be high or low).

When the level of claims or self-esteem is too high or too low, certain characteristic signs are observed.

In this case, people:

At normal level of UE, the goals must fully correspond to the skills and capabilities. Typically, after each success, he raises the bar and tries to overcome more difficult challenges. Such people are quite self-critical, but at the same time they are confident in themselves and are able to go towards their goal.

For an example of this level of ambition, consider again a musician who not only plays the guitar well, but also knows perfectly well that he has talent. This means that he is not afraid to take part in competitions, but does not believe that he has already won them. If he has an opportunity to move in this direction, then he will definitely use it.

For a better understanding of the different levels of aspiration of a person's personality, it is worth considering a few more examples of self-esteem, which is considered normal:

It is more convenient to understand the UE if we consider examples.

There are several descriptions of high self-esteem:

And for a visual comparison, a few examples of low self-esteem and UE:

Motivated to succeed and avoid failure

That is, in fact, UE also determines how ambitious a person is.

American psychologists, in the course of studying the level of aspirations, divided the personality into 2 types: motivated to succeed and motivated to avoid failure. It may seem that these 2 concepts are one and the same, but this is not at all the case.

The level of claims is considered in psychology in a complex manner. This means that one characteristic cannot replace another. If we consider the types of motivation, then for convenience it is also worth giving an example based on the relationship between representatives of different genders.

If a man is motivated to succeed, then in this case he will live with a woman, since he gets some benefit from this. For example, he may dream of family and children. For others, only sexual satisfaction is important. Some consider the material goods and benefits of marriage.

If a man is motivated to avoid failure, then he lives with a woman only in order not to be left alone or not to be discussed by others. This is seen as a failure. Therefore, he is ready to build relationships without any specific purpose. He only needs them to avoid unpleasant situations or condemnation.

At the beginning of the 20th century, active research was carried out, during which it was possible to understand that when forming the level of claims, it is important that a person does not harm his self-esteem. That is, if he has a normal self-esteem, then this is only beneficial to him. He is capable of normal relationships with people both at work and in his personal life. 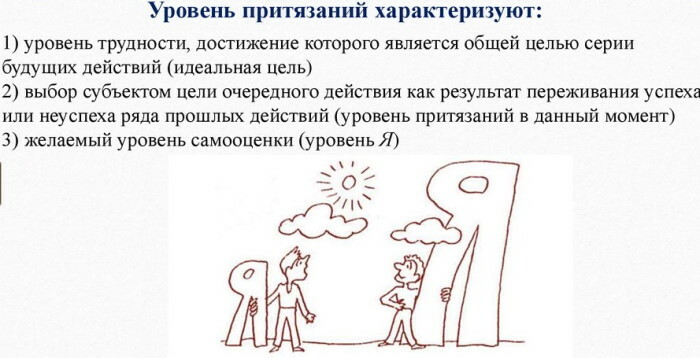 In the case of an overestimated level of claims, people begin to show a sense of superiority over others, idealize their image, completely ignore failures, or try to pass off their minuses as pluses. This leads to the fact that gradually it becomes very difficult for others to communicate with them, since if the first time to such a person there may be respect, and then pity appeared, gradually such a person will continue to demonstrate manifestations of an overestimated self-esteem.

Too low level of claims leads to anxiety, nervousness. The person behaves too shy and hesitant. If a psychologically stronger personality appears next to him, then she will be able to gain complete control over him. In addition, such people often suffer from envy, suspiciousness, and suspicion. Many call them boring. Accordingly, few people communicate with such people either.

People with adequate self-esteem and a level of ambition are always the soul of the company. They easily make new acquaintances, people want to communicate with them as much as possible.

The level of aspirations is, in psychology, a characteristic of a personality, which is associated with its other parameters. It should be borne in mind that if a person has high self-esteem, then he cannot have a low level of ambition. Accordingly, these 2 parameters are always at the same level. That is, in order to correct a person's behavior and his outlook on his own life, it is enough to work on his self-esteem.

Moreover, it is much easier to raise it than to lower it. This is due to the fact that a person with a low level of claims can easily agree that he has some problems and needs to work with it. If the UP is too high, then such a person will never admit his weakness and the need to adjust the perception of his capabilities and skills.

How does it manifest

The level of aspiration manifests itself in the level of complexity of the tasks ahead. Accordingly, the higher a person's ambitions, the more difficult he will choose to complete the task, even if it is obvious to everyone around him that he will not succeed.

Some believe that UP is characterized exclusively by human abilities, but this is not the case. Quite the opposite, people with increased PA tend to have lower abilities. But the personality at the same time assesses his minimal skills as something extraordinary, unique. A striking example of this is the situation when a person who absolutely does not want to study or work, while expecting that he should have a high salary. 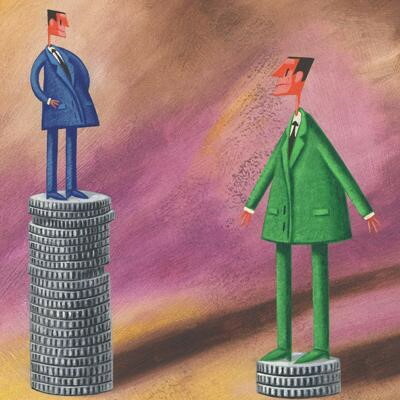 The manifestation of an overestimated UP can often be observed in children of celebrities and politicians. Such daughters and sons from early childhood receive absolutely everything in their lives. They are not ready to overcome obstacles, since they do not exist for them. But if at some point the parents of such a child go bankrupt, then he will be completely unprepared for this.

The level of aspirations (this is a concept in psychology that is becoming more and more relevant) can be determined by the Gorbachevsky questionnaire or using the Schwarzlander method. The latter technique is the most popular. It is quite simple and quick to pass the test, which is often used in higher educational institutions, schools, when interviewing potential employees.

The essence of the test is that the subject is asked to check how many pluses he can deliver in 10 seconds. After that, he is given a special form and the time is noted. After 10 sec. the process stops. After that, the teacher must compare the number of signs that the person planned to put and how many he managed to indicate.

This allows you to compile a PM report and assess the level of achievement. These checks are entered into the form. After that, the person is offered to pass the same test 3 more times. At the same time, each time he must say how many, in his opinion, advantages he will be able to indicate now. That is, in total, the subject passes the test 4 times. However, in this case, 1, 2, and also 4, the experiment lasts 10 seconds, and on 3 it stands out slightly less - 8 seconds. After that, according to a special formula, the total score of the claim is calculated.

For work, the subject needs to be given a table 10x3 cm in size, in which each square will be no more than 1x1 cm. This is an important test condition. It is better not to prepare such forms yourself. Instead, they should be printed out on a printer.

The interpretation of the results will be as follows:

How to bounce back

To improve PM, it is important to think about your self-esteem. To improve it, you can visit a psychologist and take individual trainings, but group lessons, seminars and other events will be much more effective, since it is important for a person to leave the zone comfort. Such meetings are held in all cities. An expert in applied psychology will be able to teach a person to self-increase self-esteem in 2-3 months by doing exercises at home or on the way to work.

If you don’t want to spend money on a psychologist or seminars or you don’t want to, you can turn to the literature. For example, effective exercises are described in Brian Tracy's book Self-Assessment. Also worth reading are tips from Sharon Venshida-Cruz and How Much Are You Worth? Women will benefit from the work of Helen Andelin. In her book "The Charm of Femininity" there are many useful recommendations for the fairer sex.

The level of aspirations is a concept that in psychology is closely related to ambition, self-esteem and other personal characteristics that motivate a person to set goals and move to them. It all depends on what kind of UP indicator the individual has. If he is normal, then there is nothing to worry about. An overestimated or underestimated level of claims requires adjustment.

Video about the level of claims

Relationships and level of aspirations: 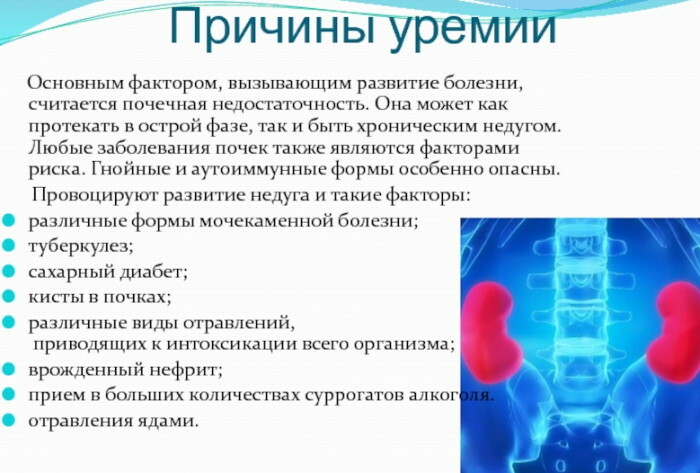 Symptom of Shchetkin-Blumberg is for what diseases

Ecofuril suspension for children. Instructions for use, price, reviews

Detralex. Indications for use and contraindications