Imprinting in psychology. What is this, simple explanation, definition, examples

Imprinting is a type of memorization and learning, in which the information received is instantly assimilated and stored for life. For the first time this phenomenon in psychology was described by Douglas Spaulding, and the term was introduced by Oscar Heinroth. Translated from English "imprinting" means "imprinting, imprinting."

The concept of "imprinting" gained popularity in psychological circles after Konrad Lorenz's experiments with ducks. The researcher found that newly hatched one-day-old ducklings are busy looking for a mother to follow. But it turned out that not just a duck becomes an image for them, but any moving body. So the ducklings mistook the first moving object they saw for their mother. After that, the birds no longer perceived the real duck as a mother figure.

Imprinting in psychology is an experience or a chain of vital experiences of the past that have formed some beliefs in a person (R. Dilts). K. Lorenz believed that imprints are structures in the brain that determine the way of perception and processing of information, response to stimuli.

Italian scientist D. Mainardi considered imprinting as a property not only of animals, but also of higher vertebrates, including humans. However, he noted that in humans this function is presented not analogously to capturing animals, but close to it. D.F. Denisov argued that imprinting in animals is the recognition and choice of a parent, sexual partners, locality, and in humans, the first experience of cultural life.

VC. Vilyunas, R.A. Kiselev, T.A. Titov, noted that imprinting is a method of automatic learning. S.F. Denisova, V.V. Cheshev, L.M. Dmitriev wrote that in the process of imprinting, new semantic and structure values ​​are born. A.G. Ponugaeva in her research indicates that people are more likely to have moral imprinting - the assimilation of behavior that reflects the spiritual values ​​of culture.

Imprinting in psychology is a process that usually occurs in early childhood. However, there are known cases of later imprinting. The results of this process are irreversible and can hardly be changed further. 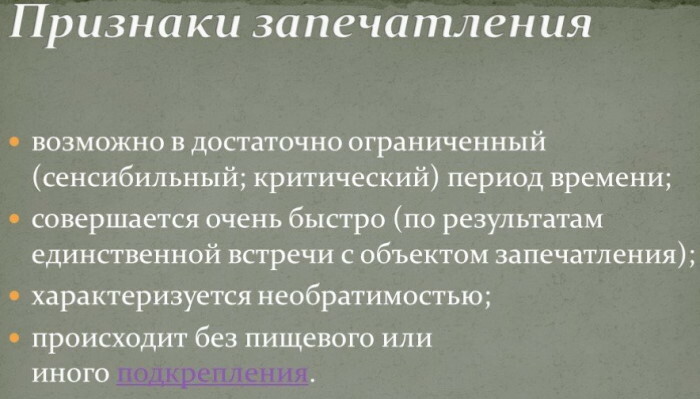 Imprinting is characterized by the following features:

What age is it typical for

Psychologists disagree about the exact age at which the first impression occurs. Researchers of newborns J. Tsaregradskaya, M. Oden, G. Dick-Read believed that there is a period of several hours when a child is open to imprinting. This opinion is criticized by a number of other scientists, as it relies on the knowledge of zoopsychology, thereby identifying humans and animals.

The hypothesis of psychoanalyst J. Bowlby, who studied attachment theory, says that the critical period lasts several hours. In his opinion, this gap continues until the child can move independently and follow a significant adult.

Bowlby distinguishes several phases when a person is subject to imprinting:

Consequently, infants and young children are subject to imprinting from the moment they singled out a significant acquaintance of an adult from the whole multitude of people in contact with him. It is this person who becomes the object of following and influences the possible impressions of the child.

At school and adolescence, children go beyond the boundaries of the family, so there are more people to capture. This is how peers and other adults become role models.

Imprinting in psychology is a transitional mechanism between a conditioned reflex and instinct Researcher G. Horn conducted experiments on animals, as a result of which he found that every species in the nervous system has an innate tendency to impress.

It is activated by visual, olfactory or other sensory stimuli. After the introduction of a certain substance, the brain region responsible for the formation of imprinting was traced on radiographs. It turned out that this area is the medioventral hyperstriatum.

The fewer genetically generated programs, the more the imprinting affects life. In humans, unlike animals, there are practically no built-in genetic programs. Therefore, at the beginning of life, imprinting has a great influence on the subsequent development of the foundations of behavior, perception of reality.

Imprinting in the past was used to demonstrate values ​​and social norms to the younger generation. This usually happened in the process of initiation - initiation rituals, which were accompanied by a stressful state of the participants. Thus, during the initiation, emotional images were broadcast that contained the semantic and cultural norms of a particular group.

As they grow older, the imprints overlap, they begin to influence each other. Under the influence of the accomplished imprinting, a way of perceiving the surrounding world, people, on which a person relies in life, develops.

Imprinting is not necessarily a negative event that affects a person's life. Imprinting plays a role in the assimilation of socio-cultural, moral, gender norms of behavior. Based on this, different types of imprinting are distinguished in psychology.

The name originated from the way a newborn is fed. Mother's milk and breast are the only source of life for the baby. The mother gives a feeling of comfort and safety.

Later, with the development of the territory, the child is separated from the mother and explores the world around him. Throwing toys is seen as a "label" for their personal space. Adults show territorial and emotional imprinting through moving to a new place of residence, buying real estate, land.

Speech or verbal imprinting is the development and understanding of the child's speech. A person's thinking, the ability to communicate, depends on the assimilation of this type of imprinting. An example of verbal imprinting is the study by J. Godefroy. The 114 studied languages ​​contain up to 85 phonemes, 75 of which the infant learns in the first year of life. But only those used in the specific language spoken by the parent are accepted and approved.

Social imprinting is formed on the example of basic values, relationships between people. In communication, imprinting can be either positive or negative. It is in contact with another person that information about activities or behavior in society is involuntarily absorbed. Imprinting also goes out of imitation of significant persons. Social impressions affect all aspects of a person's life - abilities, hobbies, choice of partner, type of family communication.

In addition, the imprinting mechanism underlies gender behavior, that is, it has a connection with a person's gender identity. In this regard, during sensitive periods, the child needs communication with a significant adult of the same gender. This makes it possible to form an adequate pattern of behavior according to gender.

Imprinting in psychology is an important mechanism that can negatively affect the development of the human psyche. If, at the moment of imprinting, the child is separated from the mother or a significant adult figure, then the natural course of mental growth will be disrupted. Subsequently, the baby may develop aggressive tendencies and problems with communication. 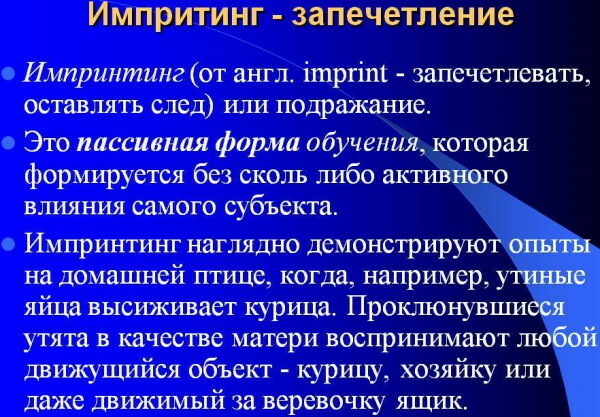 It is important for parents to realize that imprinting occurs on a subconscious level and works automatically. Therefore, if possible, it is necessary to reduce the level of stress in the family. Learned patterns of behavior a person reveals after 20-25 years. To reduce their impact on life or change the patterns laid down during imprinting, the help of a psychologist or psychotherapist is needed.

The event causing imprinting can happen in adulthood as well. This happens at a time when the psyche is most vulnerable and sensitive to stimuli. The precedent, which is eventually imprinted, remains with the person for life and is introduced into normal everyday behavior, becomes a part of the person's personality. Therefore, it is important that in times of crisis there is a loving and supportive environment nearby.

Captured events can also create entire systems, accumulating and superimposing on earlier imprinting experiences. A person feels it as hopelessness, incapacity, feels “at a dead end”.

Psychologists in their work with imprints use various techniques and approaches to neutralize the negative impact of impressions. L. Carroll explains this process through a metaphor: “If the water in the hose is constantly under pressure, sprinklers must be installed to control this pressure. Therefore, in order to control or remove something, you need to add something extra. " R. Dilts says that neurolinguistic programming removes the negative effects of imprints.

Zoopsychologists, ethologists, psychologists and specialists from related scientific trends were engaged in the study of the topic of imprinting. Knowledge of animal imprinting has led to the emergence of several theories of imprinting that have studied this phenomenon in human life.

Psychologist T. Leary developed the theory of contours. He called the contours the levels (imprints) that consciousness goes through as it develops.

Imprinting in psychology is an unconsciously learned form of behavior. Impressions occur mainly in childhood and affect the rest of your life. Imprinting can also happen in adulthood, so it's worth reducing stress and taking care of your mental health. 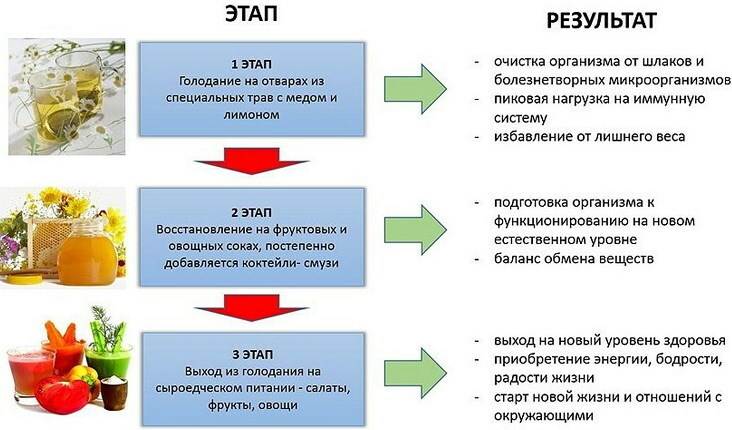 ContentThe essence of the techniqueDescription of the methodHow long does the cleansing takeWhat is requiredWhat you need to knowHow to ease fastin... 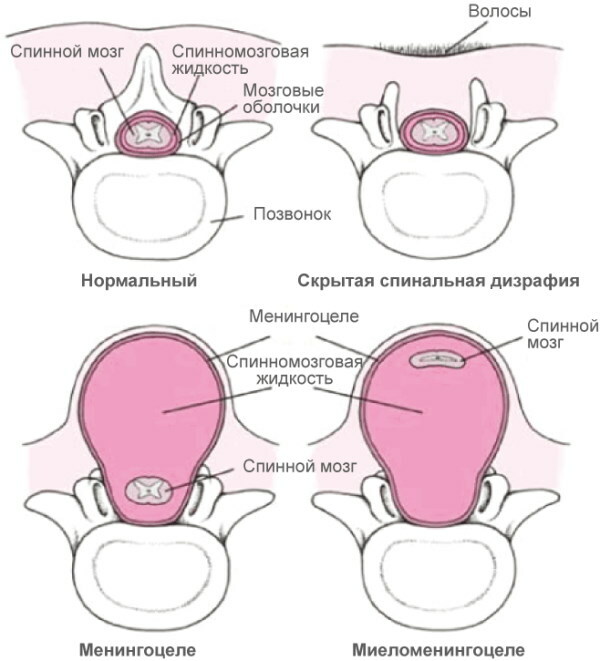 Spina bifida S1 in adults. Treatment, what does it mean