Stereotyping is an act of forming ideas in psychology about any event, people, which transfer to the whole group of similar phenomena or persons. Initially, the word "stereotype" was used to describe a form for printing impressions in a printing house. In 1922 g. American journalist W. Lippmann used it as a scientific concept, understanding by a stereotype an unspecified way of perceiving reality, which gives rise to prejudices.

The concept of "stereotype" was developed by many researchers throughout the history of mankind.

The definition developed from characteristics similar in meaning:

In foreign psychology, the study of stereotyping was carried out by M. Horkheimer, T.V. Adorno, V. Duaz. In domestic science, the concept was introduced by P.A. Sorokin, who viewed the stereotype as a stereotyped human behavior. V.A. Yadov described the definition as emotionally colored social images.

Yu.A. Sorokin called the process of communication according to the linguistic models accepted in society a stereotype. According to P.N. Shikhirevu is a primitive, sensually colored set of qualities that biasedly reflects reality. THOSE. Vasilieva, V.S. Ageev, I.S. Cohn defined the stereotype as a way of processing information and a model of actions in different life situations. 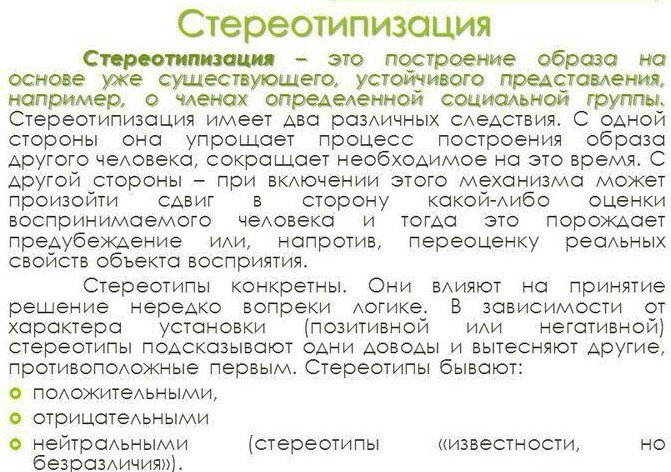 Yu.E. Prokhorov viewed the stereotype, on the one hand, as an element that preserves and translates the culture of a given society, and on the other, as an established means of identifying "ours" in a given culture.

Stereotyping is a stereotyped transfer of an image to situations and people. Surface models include beliefs based on a biased assessment of external characteristics. Deep stereotypes in psychology are transmitted in society for years and even centuries. They are formed under the influence of historical events.

It represents stereotypes that are formed in a particular personality. They can either coincide with social stereotypes or contradict them.

Persistent beliefs reflect the actual characteristics of the stereotyped group. The degree of objectivity may vary. There are no absolutely objective stereotypes, since stereotyped images are generalizations, therefore they cannot correspond to real facts.

Here, circumstances and situations are endowed with stereotyped characteristics. 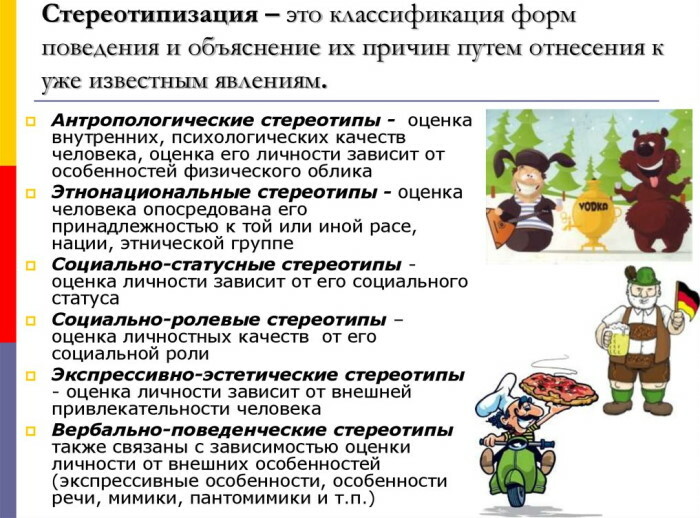 This type of stereotyping is based on the idea of ​​the physical image of another person. This is an automatic posture position, plastic walking and poses. It is thanks to this phenomenon that you can recognize your friends from afar.

Negative stereotypes are what is considered to be a stereotype in society. They are used as a means to insult other people. An example of a negative stereotype is "all blondes are stupid." So a girl who graduated from university with honors may be ridiculed when applying for a job and not get the desired position because of the stereotype.

Positive stereotypes are presented as a compliment. For example, the common pattern is "All Asians are smart" or "All Asians are good at mathematics." Despite the first positive impression, such a judgment can be harmful. According to it, a small child of Asian descent may feel inappropriate or defective if they have learning difficulties.

The essence of this type is in the reaction of specific people to judgments. 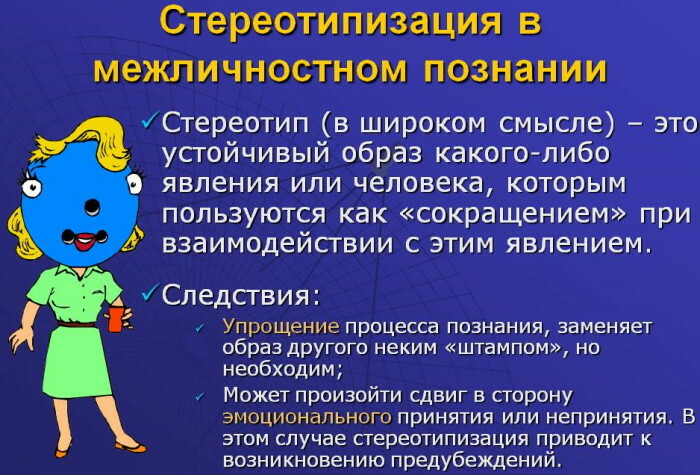 Researchers Lepore and Brown found that people with a high level of stereotyping respond more vividly to neutral phrases and adjust them to previously learned patterns.

Accurate stereotypes reflect objective reality, although from the outside they may seem inappropriate. For example, older people do move more slowly than younger people.

This is the name for stereotyped judgments that can be interpreted in two ways. For example, mentally unhealthy people are dangerous to others. This is not an absolutely accurate statement, but it is not a lie either. Here we can say that in fact only people with certain mental illnesses can threaten the safety of others, but only in the absence of medical care.

Social stereotypes are such images that are endowed with all people whom the person does not recognize as members of his group.

This type of stereotypes includes:

Social templates are rather false. They distort people's ideas, bring discord in relationships. 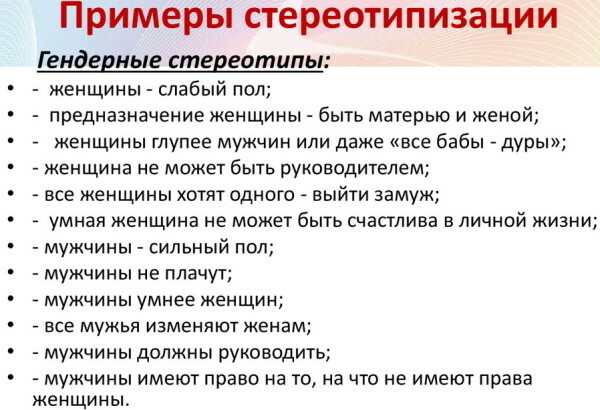 Causes and processes of formation

Stereotyping in psychology is the formation of judgments through the interaction of elements of the psyche. Stereotypes appear when referring to individual or group life experiences. The formation of stereotypes occurs in the second signaling system and includes 3 phases. 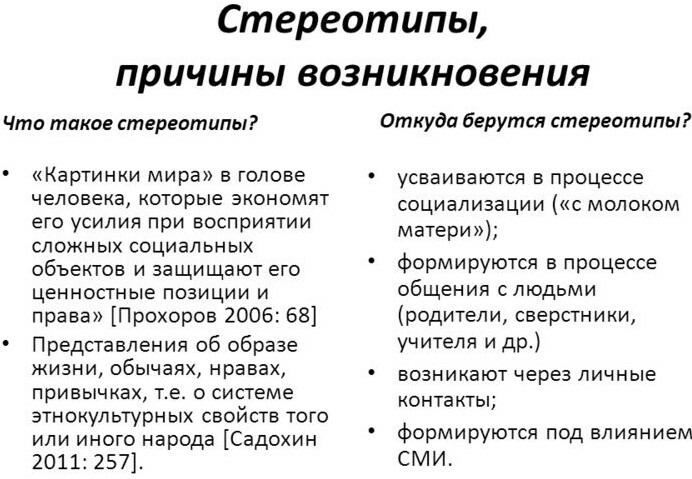 W. Quasthoff noted that the functions of stereotypes are necessary for the normal functioning of the psyche and consciousness - social existence, internal psychological stabilization, information processing. In the process of stereotype formation, such mental actions as attribution, categorization, selective attention, the formation of concepts, and assessment are involved.

The stereotype is based on 3 components:

Stereotypes arise for various reasons. The main one is protecting the brain from information overload. The mechanism of stereotyping is based on simplifying the thought process. The psyche does not every time react to stimuli with all the fullness of experiences, but transfers them to already mastered models. The constant flow of new information loads the brain, so the body independently classifies the incoming stimuli, adjusting them to familiar images.

So the process of cognition does not exceed the ordinary level, relying on everyday experience, formed through the generalization of ideas. At the same time, the surrounding world itself contains similar, monotonous, repetitive elements to which a person reacts with stereotyped actions. Rejection of stereotyping would lead to a constant work of the psyche to differentiate and classify information. So template thinking simplifies the knowledge of the world and facilitates the work of thinking.

Stereotypes are learned through inculturation and socialization. The templates themselves are part of the culture. A person remembers many groups of stereotypes from childhood, takes them out of the family and environment. The images are fixed at the age of 12-30, after which they practically do not change. As a result, the ready-made models reflect not only the understanding of their own group, but also the idea of ​​other groups about their own.

The formation of images occurs in communication with loved ones who are most often present in life. They are family, friends, teachers, colleagues. But sometimes stereotyped thinking is also manifested in private contacts. For example, if a person is cheated on the market by a seller of a certain nationality, then in the end the buyer will transfer his judgment to all persons of this nationality.

Also, the media are involved in assimilating stereotypes, since for many people they are an authority. Media opinions often crowd out personal beliefs.

This happens for several reasons:

Stereotyping is, in psychology, stable emotionally colored representations in a certain group of people. These behavioral patterns have different impacts on people's lives. The positive effect of stereotypes is to free the psyche from performing various processes aimed at scanning the environment. 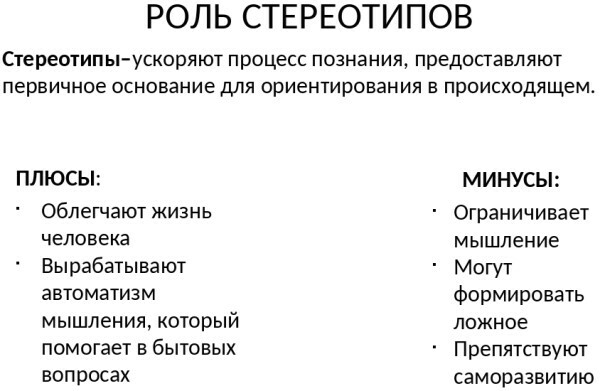 This is how consciousness directs its work towards solving other problems. A person learns most of the stereotypes in childhood. Therefore, templates are used to distinguish bad from good, to assess the safety of a space.

Stereotyping is in psychology a form of perception of people or objects. The negative role of the stereotype is that such perceptions are often based on false subjective information. Templates are used to mislead or manipulate people. Stereotypes bring disagreements into communication, give rise to conflicts.

False beliefs violate the understanding of correct life guidelines, set a person up against others on the basis of their gender, race, appearance. Instead of finding similarities, stereotypes focus on differences, divide society into “us” and “foes”. 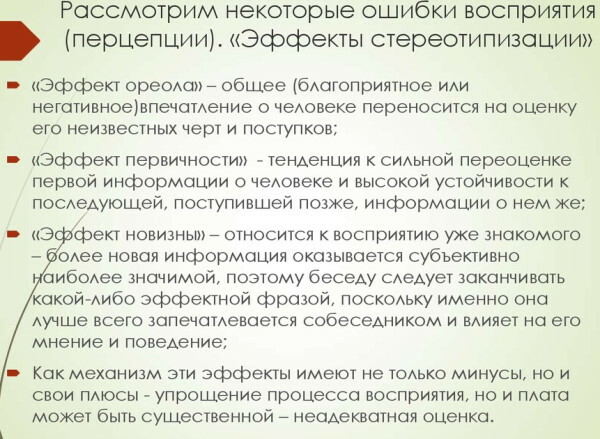 In addition, negative stereotypes are often the source of stigma, discrimination and xenophobia. Such attitudes arise in people who use templates out of fear of losing their social identity. Through negativism and intolerance, they strengthen their position in the group they occupy and feel psychological comfort.

How to disobey and get rid of

Stereotyping is a formed image in psychology that manifests itself in response to a specific stimulus. To get rid of the influence of stereotypes, it is necessary to carry out conscious work on yourself. It is necessary to understand exactly which patterns and views are useful and accepted, and which are negative. Necessary stereotypes are considered that a person has formed on his own experience, without relying on the opinion of society. They can also include social images, but those that the individual passed through himself.

To do this, it is necessary to write down the most famous representations and read them several times. There is an emotional response to every phrase. It is sensually colored sensations that show the attitude towards the stereotype. There are also several techniques for getting rid of stereotyping.

The mechanism of this method is based on stopping structures that support the stereotype, for example, stable images and reactions, emotional and bodily vibrations. From the very beginning, it is necessary to track such psychophysical reactions, consider them separately, highlight the most striking. Therefore, the first step is observation and analysis. 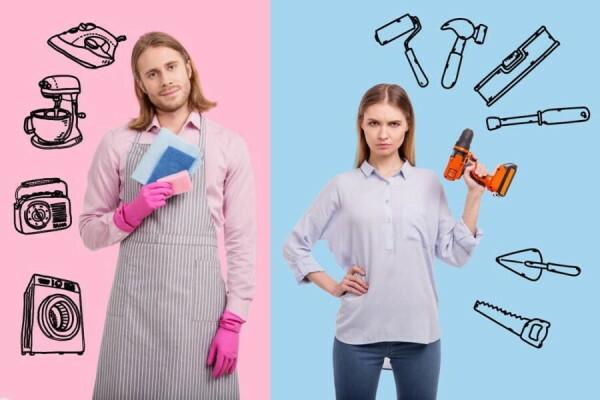 For example, a stereotyped action is scratching the back of the head in response to a stimulus. Here, a stop is considered to be directed attention to the movement of the hand, which destroys the sequence of the pattern's manifestation. A separate part of this process can be called an attempt to stop the internal dialogue at the moment of the strongest resistance.

Consists of replacing one view with another. As in the previous example, getting rid of the stereotype occurs according to a monotonous pattern - at the moment of the reaction. In this case, the action must be replaced by a manifestation similar in form.

The stereotyped action changes through the transformation of the way of its manifestation. In this method, it is necessary to consciously seize the initiative at the time of the disclosure of structures, and then endow the established elements with new properties. Using a physical stereotype as an example, to transform scratching the back of the head into performing another action not related to the body.

Going beyond the stereotype

It differs from the previous methods in that it does not use a direct impact on the structure of the stereotype.

The method consists of 3 stages:

Here, the reaction to a stimulus in the form of scratching the occiput is experienced before the motor manifestation of the template. A person is aware of the playing of a stereotype, but does not show it physically, as a result of which the action fading occurs. 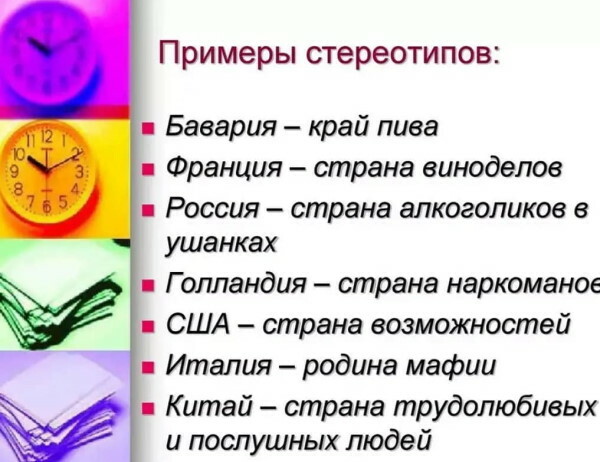 There are also the following ways of working with stereotypes in interaction with other people:

Stereotyping is an important process that saves the efforts of the brain and relieves the psyche. Stereotypes make it possible to navigate the world, to understand the values ​​of a particular society. At the same time, ideas in psychology sometimes carry a negative message and are perceived as insults. Therefore, you need to understand which patterns are part of the worldview, and use them with caution so as not to offend the interlocutor.

Arachnoiditis: what is it? Symptoms and Treatment

cerebral arachnoiditis - an inflammation of one of the meninges, which is why it thickens, in its tissue adhesions are formed, and all this result...

Scleroderma, what is it? Picture, Symptoms and Treatment

Scleroderma is an autoimmune connective tissue lesion that is evident sclerosis and foci of inflammation in the skin and internal organs. The dise...

Vulva in women - it is a disease in which the inflammatory process affects the vulva.Illness causes discomfort and can lead to the appearance of c...