Amlodipine. Indications for use and contraindications

Amlodipine is a medication with pronounced therapeutic properties, which belongs to the group of antihypertensive drugs with additional antianginal properties.

This group of medicines helps to control blood pressure indicators, prevents their critical increase and reduces the likelihood of developing complications against the background of vascular disorders. Indications for the use of the drug describe the possibility of prescribing in acute and subacute forms of hypertension, as well as as part of a combination treatment.

The tablet is used in long courses or on an ongoing basis, depending on the course of the disease. The spectrum of action of the drug is narrow, since it is prescribed only for certain pathologies.

Hypertension is a vascular disease in which there is an increased load on vascular walls from the side of the blood, provoking an increase in systolic and diastolic pressure. As a result, the patients' heart function is disrupted, the central and peripheral blood circulation deteriorates, which negatively affects the general condition.

The use of tablets allows you to eliminate the most pronounced symptoms of pathology:

The drug does not eliminate the cause of the development of arterial hypertension, since it affects only the consequence of the progression of such symptoms.

Amlodipine (indications for the use of the drug can be studied in the official description) can be used to diagnose a stable form of angina pectoris. This is a condition in which a patient develops suffocation as a result of a lack of oxygen in the cells of the myocardium.

In most cases, the condition is accompanied by an increase in blood pressure, shortness of breath, severe pain in the heart. The use of the remedy helps to temporarily eliminate exactly the cause of the onset of symptoms, that is, it improves the supply of oxygen to the tissues.

The use of the drug allows you to alleviate the condition, reduces the likelihood of developing asthma attacks, and controls blood pressure indicators.

A pathological condition that occurs in patients quite rarely is accompanied by a spasm of the vessels that feed the heart. In this case, the patient has angina attacks are rare, occur spontaneously, often disappear without special treatment.

The use of pills for such a violation does not affect the cause of development, but relieves pain in the heart area, lowers blood pressure. As the main method of treatment, the medication is not prescribed, but if the patient has arterial hypertension, it is included in the course of the main treatment.

Disruption of the heart, in which there is a deterioration in blood circulation and the supply of all tissues with blood, oxygen, nutrients. 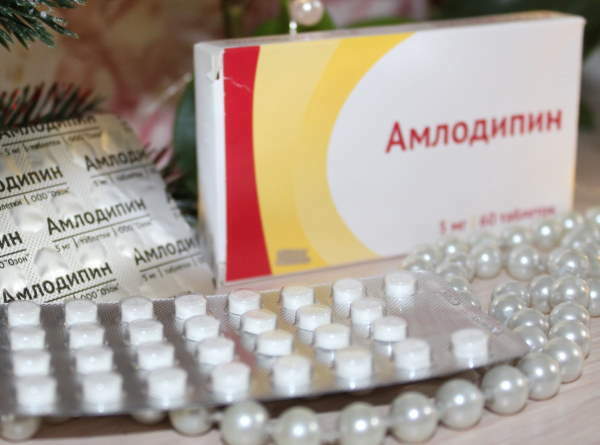 The tablets can be used if the patient has symptoms of hypertension, helps relieve pain in the heart area and reduce the likelihood of disease progression.

Amlodipine has contraindications, which are indicated in the official description, as well as indications for use. The doctor takes them into account when prescribing a medication.

Hypotension is a pathological condition in which a patient has a persistent decrease in indicators blood pressure, accompanied by severe symptoms from the heart, nervous system and vessels.

The use of the drug in this case is prohibited, as it can provoke a critical decrease in numbers, impaired consciousness, and other severe symptoms. This is due to the hypotensive properties of Amlodipine.

A dangerous condition in which patients' blood pressure decreases against the background of various factors, the supply of vital organs with blood deteriorates. 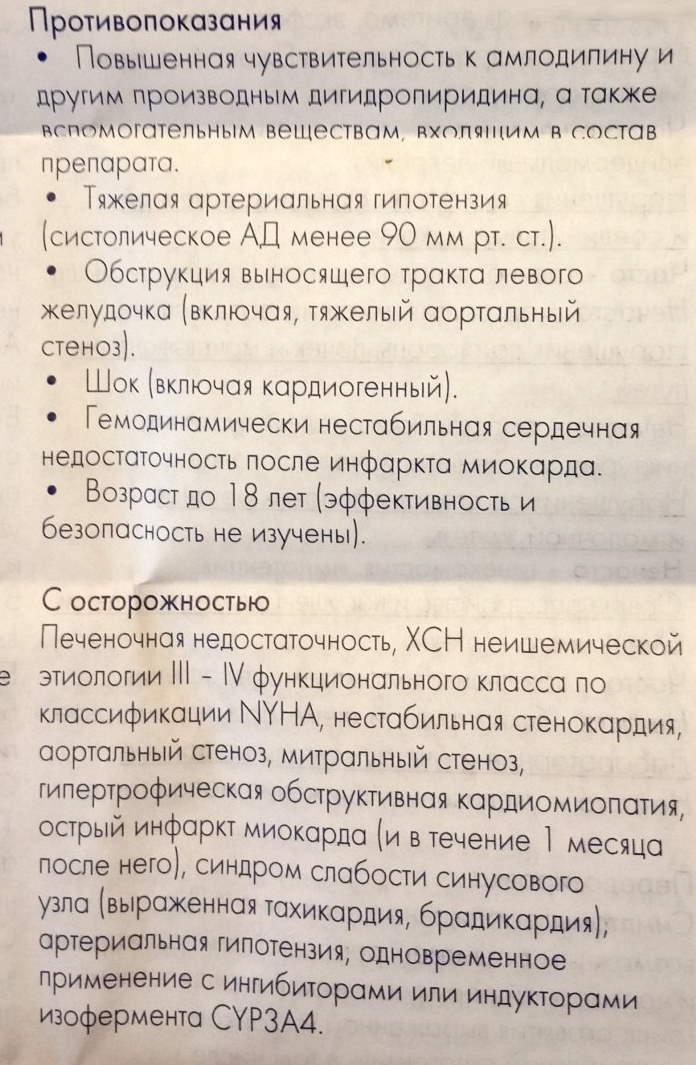 The drug has hypotensive properties, so its use can only aggravate the symptoms, provoke severe complications, up to cardiac arrest.

Cardiogenic shock is a dangerous pathological condition in which patients' blood pressure also drops to critical levels, and myocardial damage is also observed.

The use of tablets in the acute stage of such a violation will certainly provoke the development of a critical condition that threatens the patient's life.

An unstable form of angina is not treated with Amlodipine, which is associated with an increased risk of complications due to frequent changes in the clinical picture.

In the event of the development of such a violation, safer means are selected that do not provoke a deterioration in the condition. Taking medication can lead to more frequent attacks and a general worsening of the condition.

Aortic stenosis is diagnosed when the walls of the aorta narrow and persist for a long period of time. In this case, the use of tablets can provoke an aggravation of symptoms as a result of the rapid flow of blood to the affected area.

Failure to provide assistance can be fatal.

The use of the drug does not help to eliminate the symptoms of diseases, but often provokes the development of an acute allergic reaction on the skin and systemic disorders.

Amlodipine (indications for the use of the drug do not describe the possibility of prescribing it to patients with any contraindications) are not used in the treatment of pregnant women, which is associated with an increased risk of developing complications.

The drug can negatively affect the development of the fetus and the mother's body, provoke hypotension, dizziness, and other complications.

The drug can pass into breast milk, so it is not prescribed for breastfeeding women. Taking pills can provoke a deterioration in the child's condition, weakness, and refusal to eat.

A woman during this period may also feel severe weakness if she takes pills. Additionally, the drug can lead to the development of allergies in a child.

Today, experts do not have data on the effect of the component of the composition on the body of children and adolescents, since research in this area has not been carried out.

Doctors suggest that taking the medicine by patients under 18 years of age may be accompanied by severe hypotension, headache and impaired coordination of movements.

If the patient has an intolerance to any substance in the composition of the product, its use is strongly discouraged. This is associated with an increased risk of complications immediately after administration. 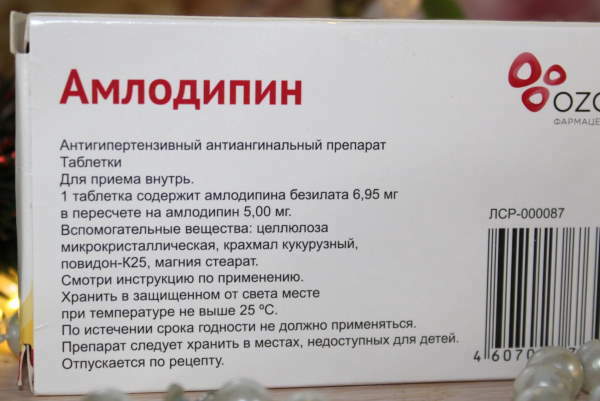 Violation of the doctor's recommendations leads to the appearance of acute symptoms of an allergic reaction, swelling and severe itching of the skin and mucous membranes. If left untreated and continued to take the medication, complications can threaten the patient's life.

Amlodipine is an effective drug with antihypertensive and antianginal properties, which is often used for patients with various forms of hypertension. The drug is considered effective, but it has many contraindications, which is associated with its pronounced effect.

Video about the drug Amlodipine

Amlodipine. Instructions for using the medicine: