Arifon retard - effective antihypertensive agent, which is used for patients with cardiovascular diseases at different stages of development. The medication is considered effective, and the indications for its use describe the possibility of prescribing for the purpose of carrying out maintenance therapy. The decision on the use of the medication is made by the doctor, who first takes into account the peculiarities of the course of the disease in a particular patient.

The drug is available for purchase as an oral tablet. They are small, white, round, biconvex, making them easy to use. The tablets are placed in plates of 30 pieces, which are in small cardboard boxes.

In the boxes, you can also find not only the plate, but also a description, which indicates the features of the use of the product, possible contraindications and complications. The composition of the drug includes the component indapamide, which provides the main effect on the body.

These substances do not have medicinal properties, but are necessary for the formation of a film shell. The amount of the main ingredient in 1 tablet is 1.5 mg. Also available are tablets without the mark "retard", where the dose of the main substance is 2.5 mg. Experts pay attention to the fact that this mark indicates that the main ingredient, when it enters the body, is released gradually. 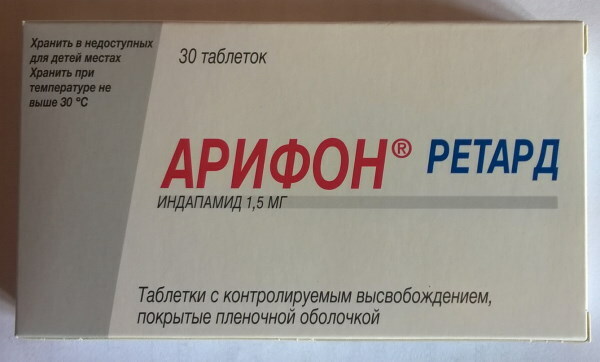 This provides a prolonged action, which reduces the likelihood of complications from the internal organs as a result of the rapid release of indapamide.

Dispensing of medicine in pharmacies is carried out after presentation of a certified prescription form from a doctor.

The cost of the tablet product ranges from 180-250 rubles. depending on the region of distribution and the number of tablets in the package.

Arifon retard (indications for the use of the medication are indicated in the official description) has hypotensive and diuretic properties. The tool helps to reduce blood pressure indicators, which has a beneficial effect on the condition of patients with hypertension of varying severity.

The diuretic properties of the drug can improve the general condition, eliminate edema and some other symptoms that bother patients with cardiovascular pathologies.

The drug acts quickly after taking a single therapeutic dosage. The main ingredient has vasodilating properties, which leads to a decrease in the load on the vascular walls in patients with hypertension of varying severity.

As a result of vasodilatation, not only blood pressure decreases, but also the load on the heart decreases. 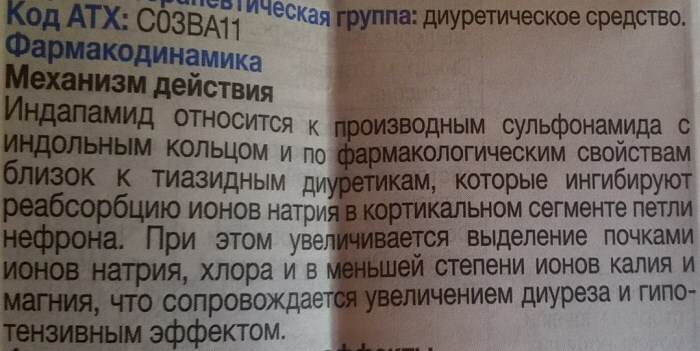 The drug also has other properties:

The effect of the drug after oral administration develops approximately 1 hour after administration. In this case, the maximum concentration of the main substance is reached only after 12 hours and remains throughout the day. After this, the effect is gradually weakened.

The processing of the ingredient is carried out in the liver, after which the metabolites are evacuated mainly by the kidneys. The accumulation of the component in the body does not occur, but 7 days after the start of the intake, a constant concentration of the substance is achieved, which ensures the maintenance of a constant effect.

In different patients, the characteristics of absorption and distribution of the drug may differ, which is associated with the individual nuances of the work of the organs.

Arifon retard is prescribed mainly for diagnosing pathologies of the heart and blood vessels.

The main indications for the use of the medication:

The tool can be used when diseases are accompanied by an increased level of potassium in the blood.

Despite the high efficiency and relative safety for patients, the drug is not used when diagnosing allergies to any ingredient in the composition and lactose intolerance. 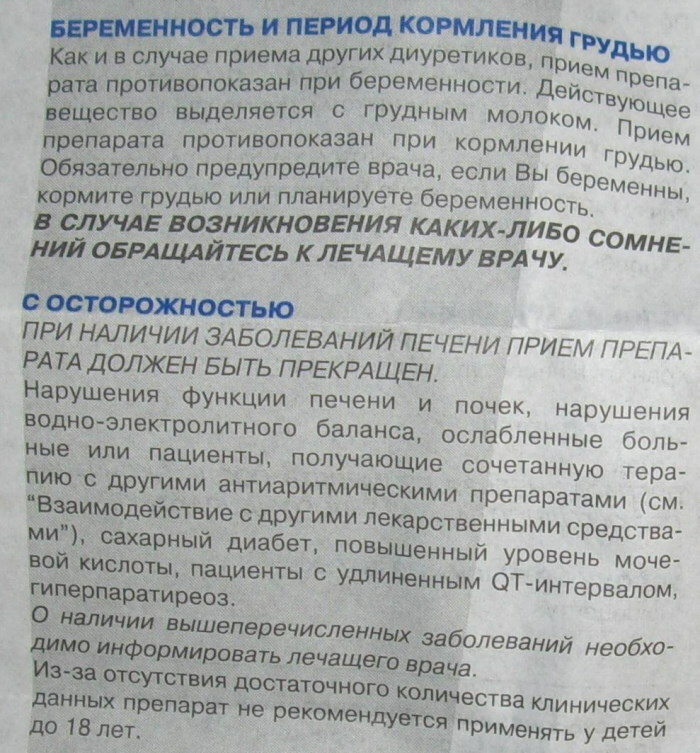 Other obstacles include the following conditions:

With caution, the agent is used for exacerbation of chronic gastric pathologies, as well as acute infectious diseases of the kidneys.

Arifon retard (indications for the use of the medication describe the possibility of treating various forms of hypertension) are taken only orally in the dosage prescribed by the doctor. Since it is used primarily for the treatment of hypertension, pills are usually prescribed according to the standard regimen.

The dosage for each patient may differ, depending on the initial blood pressure and the stage of the disease. 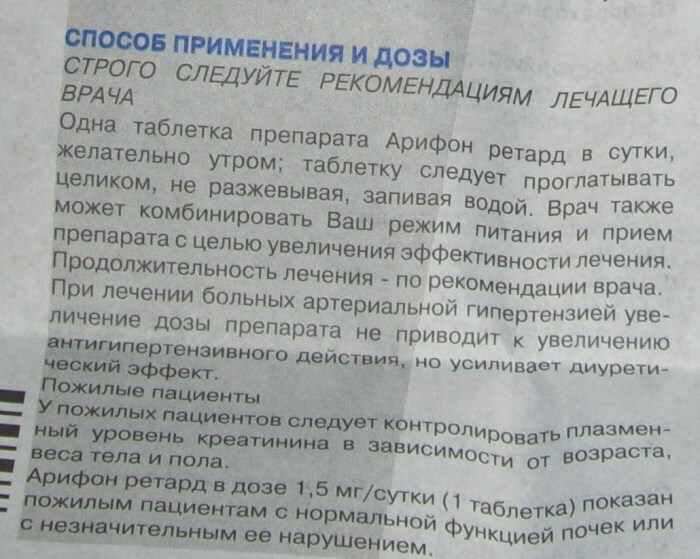 The duration of use depends on the numbers of blood pressure and the reaction of the vessels and heart of the patient to the drug. Usually, the remedy is used on an ongoing basis if the patient has a progressive and advanced stage of hypertension. The mild course of vascular disorders requires the correct determination of the dosage, since higher doses can provoke a critical decrease in indicators, the development of additional complications.

Reception is carried out separately from food, washed down with plenty of water to accelerate the dissolution of the film shell. Do not combine consumption with food intake, as the therapeutic effect may be weakened.

Arifon retard (indications for the use of the drug should be studied before starting treatment) can provoke negative reactions if the instructions are violated. Experts draw the attention of patients to the fact that the risks of complications cannot be excluded if all the rules are followed.

The most pronounced symptoms are observed on the part of the skin and mucous membranes. Patients may experience skin rashes. In the initial stages, the lesion is small, but gradually increases as a result of the progression of the allergic reaction. Patients also notice severe itching, burning and irritation of the skin.

The tool can provoke swelling of the tissues of the oral cavity, nasal passages and eyes. Such symptoms are noted with the progression of an allergic reaction. Often, lacrimation, nasal congestion and damage to the tissues of the oral cavity join. The latter symptom can complicate food and fluid intake, which only aggravates the general condition.

The appearance of acute or subacute complications is the reason for refusing therapy. The patient does not always need to prescribe special drugs to normalize the condition, but in some cases it is necessary to use drugs from different groups.

Taking the drug in higher doses usually does not provoke severe reactions, since the active substance is not toxic to patients. Despite this, cardiologists rarely rule out the risks of developing an overdose in different patients with a single dose of a large number of pills.

Overdose is accompanied by severe headaches, severe dizziness and impaired coordination of movements. For some time, symptoms from the digestive system join, manifested in the form of repeated vomiting, diarrhea and pain in the abdomen. 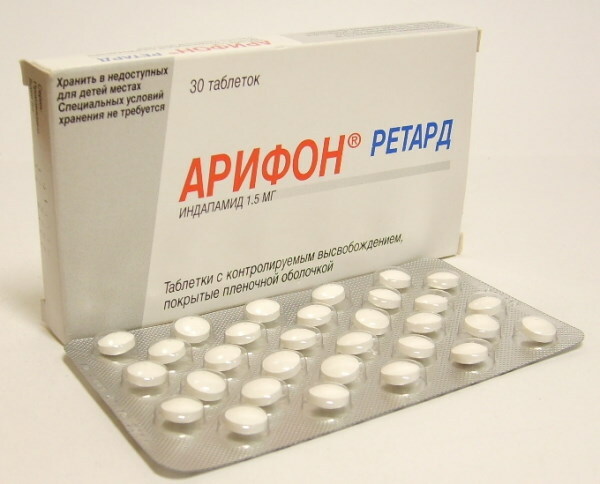 The condition may be accompanied by an acute course of urticaria, in which the itching becomes unbearable, and the patient is forced to comb the tissues at the lesions, damaging the outer layer of the skin. In case of an overdose, the patient undergoes a gastric lavage procedure, followed by the appointment of antihistamines, hormonal drugs, enterosorbents.

Self-treatment of an overdose or ignoring the symptoms of such a condition is not allowed.

Arifon retard (indications for the use of the drug do not describe the possibility of prescribing for the treatment of hypotension) should be used only as directed by a doctor, that is, after identifying persistent manifestations of hypertensive disease.

Throughout the entire period of treatment, regular monitoring of blood pressure indicators is required. The patient can carry out the measurement independently at home, it must be repeated 2 times a day.

You should not take the medicine before bedtime, even if 2 tablets per day are prescribed. It is recommended to take it in the first half of the day, which will avoid such a side effect as frequent urination at night.

The drug belongs to potent drugs, therefore, its combination with other drugs should be agreed with the cardiologist. Arifon is prescribed with extreme caution with antiarrhythmic, antibacterial drugs, antipsychotics.

The weakening of the hypotensive effect is possible when the tablets are combined with non-steroidal anti-inflammatory drugs. Laxatives can lead to intense excretion of potassium from the body if used in combination with antihypertensive pills. Hypoglycemic agents increase the toxicity of the tablets, which is important to consider when using. 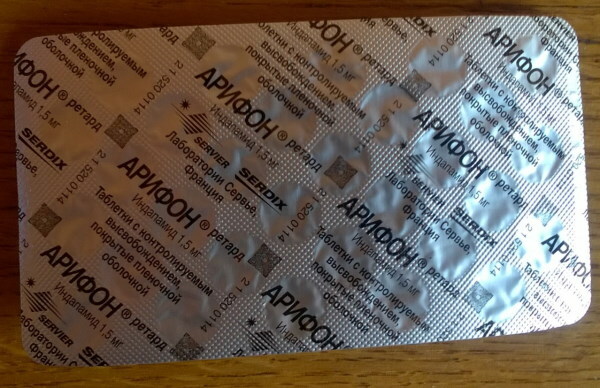 The drug Baclofen can enhance the action of Arifon, therefore, when prescribing, this feature should be taken into account. If you need to combine several medications, you should first visit a doctor who will assess all the risks for the patient.

The tool has analogues, since the original cannot always be prescribed to patients.

The most effective drug substitutes are:

The choice of a specific analogue is made by the doctor after examining and interviewing the patient. Sometimes patients choose a substitute on their own, which leads to severe reactions and a deterioration in the general condition.

The drug can be stored for 2 years in a dark and cool place, it is important to protect it from sunlight and children.

After this period has expired, medication is strongly discouraged. Manufacturing and expiry dates are indicated on the packaging.

Arifon retard is an antihypertensive agent with a pronounced diuretic property, used to normalize blood pressure indicators, reducing the likelihood of complications against the background of persistent hypertension. Indications for the use of the medication are described in the instructions, they indicate the need for a preliminary visit a cardiologist or therapist who will determine the appropriateness of the appointment, assess the possible risks for a specific sick.

Video about the drug Arifon Retard

Arifon Retard. Instructions and description of the tool: 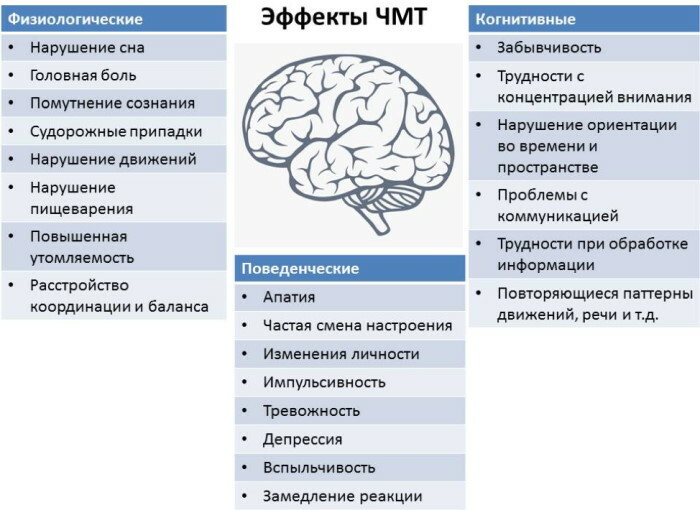 The child hit the back of his head on the floor. Consequences of what to do

Is it possible to breastfeed monural or not? 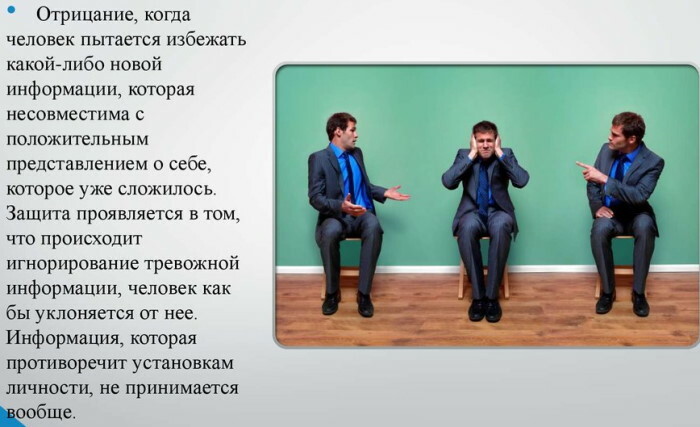 Denial in psychology. What is it, definition, examples from life, stages, reasons