Self-control in psychology is, the definition is short, ways of development, types, learning

Self-control in psychology means the ability of a person to regulate and control your emotions, thoughts and actions (inaction), directly related to awareness and willpower. Derived from the English phrase Self-control, this concept is intertwined with self-discipline of the individual, is widely used in gelstat psychology and helps a person to achieve set goals.

Self-control in psychology is an assessment and awareness of a person's own actions, mental processes and states (Big Psychological Dictionary). This concept also includes the ability of a person to orient himself on the reference behavior and the ability to obtain information about controlled actions and states.

In the explanatory dictionaries of S. I. Ozhegova, D. N. Ushakova, T.F. Efremova's self-control is interpreted as a person's control over himself, his behavior, the state of his work.

Professor A. A. Krylov noted that a person throughout his life acts as a subject and object of control. In the first case, he himself is the owner of the control mechanism, and in the second, he is subject to public control. In the concept of "self-control" the doctor of psychological sciences put the ability of a person to independently control his own actions, psychological and emotional activity.

The Pedagogical Encyclopedic Dictionary interprets the term as a conscious regulation by a person of his own states, motives and actions, founding and comparing them to the subjective ideas accepted in society and norms. Self-restraint, which is an important element of self-control, is of great importance here, and implying the ability of a person to abandon unproductive and disapproved of society gusts.

Expanding the concept in detail, the authors of the dictionary also noted that the ability to self-control is not inherent in the individual at the genetic level, but should be formed gradually, developing him as a person. 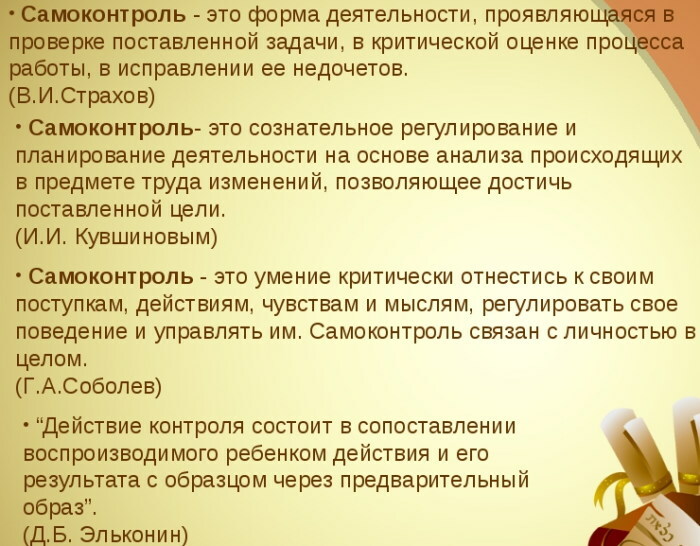 As a psychological phenomenon, self-control includes all the processes due to which a person is able to:

Self-control in psychology also means a special, inherent in an individual ability to pacify his feelings, which is considered as his understanding of his imperfection and the desire to act exclusively as reasonable, adhering to the established rules of behavior human.

Professor A.A. Krylov noted that self-controlling neurological processes occur mostly in the cerebral cortex. Injury to any of its lobes (both intrauterine and as a result of conscious activity) leads to a violation of the process of self-control, the appearance of an aggressive or deviant behavior.

Characteristics and description of the process

Self-control in psychology is, according to the American-Israeli psychologist D. Kineman, a system that ensures the functioning of the human psyche and concentration of attention, which is mandatory for conscious mental actions.

According to the psychologist, self-control:

D. Kineman also invested in the concept of "self-control" - help in maintaining a person in stressful situations of commitment, as well as one of the ways to deal with various psychological problems. Thanks to self-control, the individual can more easily endure difficulties, physical, psychological and intellectual stress.

In 1960, the American psychologist W. Michelle conducted a “marshmallow test” among young children, during which each of the children received a piece of dessert and the punishment not to think, but to its taste and sweetness. 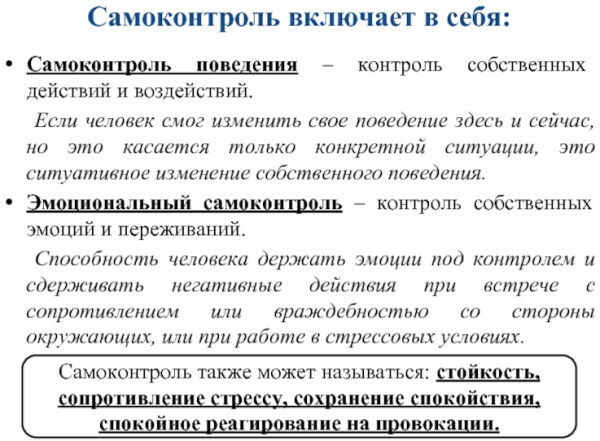 The child was offered 2 options for action:

For the next 40 years, the psychologist closely followed the lives of the participants in the experiment and came to the conclusion that children who succumbed to temptation and ate their piece of marshmallow immediately, in adulthood, they faced many emotional and psychological problems much more often than those who, with the help of self-control, overcame the initial temptation.

Generalized definition of the term Doctor of Psychology, Professor A.A. Krylov gives from the position of a functional approach to it, based on the fact that the object self-control, regardless of the sphere of mental phenomena, always has a verification character, carried out in the process of comparing it with a standard already actually taking place in the real world.

Self-control in psychology is based on the following concepts:

According to psychologists, in most cases, these two phenomena are interconnected, being the main part of self-control.

Self-control in psychology is the ability of a person to inhibit his simplest motives and emotions, with the purpose of subordinating them to more worthy and lofty goals (dictionary "Human Psychology from birth to death ") y

Doctor of Psychology Krylov A.A. in his lecture course, he noted that the ability to self-control permeates all human activity: educational, play, professional and sports, and depending on the specifics of its manifestation, temporal and spatial characteristics, it is subdivided into the established in psychology classification. 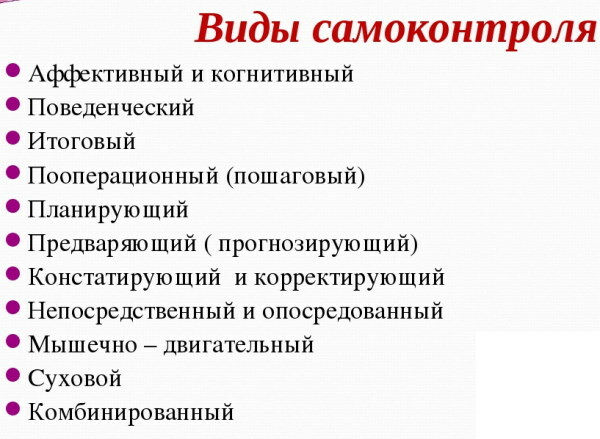 There are also differences in visual, auditory and tactile self-control. 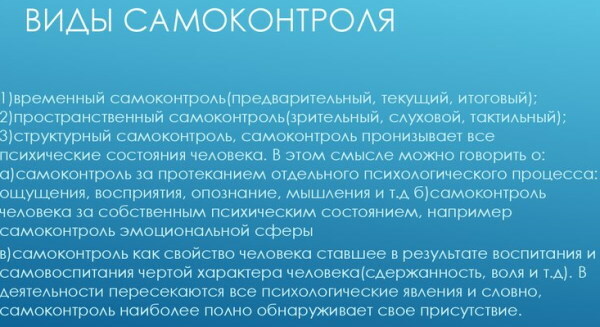 The process of human life is subject to the dominant external self-control prevailing in various types of social activities and behavioral practice. So, a person walking or using personal or public transport, using the navigator, checks their location in relation to the final point of the route.

Self-control is a condition for an adequate, purposeful, integrated human psyche, the basis for self-education and self-improvement, training and professional activity, behavior in society (Doctor of Psychology, Professor Krylov A.A.).

In the process of his life, a person, according to the doctor of sciences, is able to act both as an object and as a subject of control:

Self-control is impossible without proper (reference) behavior, and the conformity of actions, actions or external factors in relation to reference standards is carried out by comparison.

The self-control mechanism, according to A. Krylova, takes place at the cellular level of the human body and is based on the ability of self-regulation to maintain the optimal level of respiration, the state of the blood and the work of all vital organs and systems.

Self-control permeates all psychological processes in the human body: sensation, thinking, perception, one's own mental state and the emotional sphere. 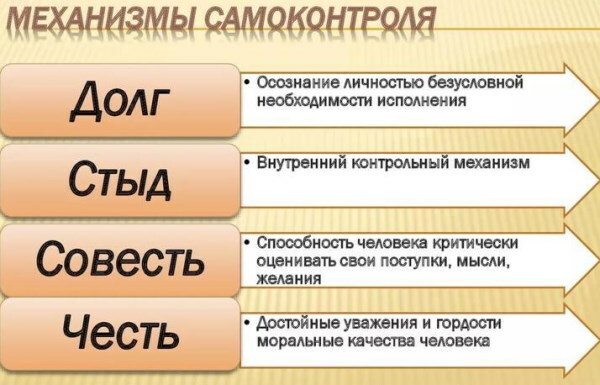 Helps teach a person to think about their actions before taking them, and also allows the person to if necessary, exercise self-discipline, maintaining rationality and calmness even in a stressful situation.

Reflects how well a person is able to fulfill their obligations, help others and follow the norms of morality and ethics accepted in society,

The ability to adapt their reactions and emotions to different situations means that a person is able to cope with any external or internal changes, becoming more flexible and open to different points vision.

An optimistic attitude is necessary to train the mind and emotions, allows a person to improve their behavior, while maintaining focus and motivation.

Experts note that people with developed self-control are characterized by three key features:

How to develop self-control

Self-control in psychology is a self-confidence training technique based on the systematic keeping of a journal by a person. social events, reflecting all the negative and positive emotional changes that occur to him (Kjel L., Ziegler D. "Theories of personality"). 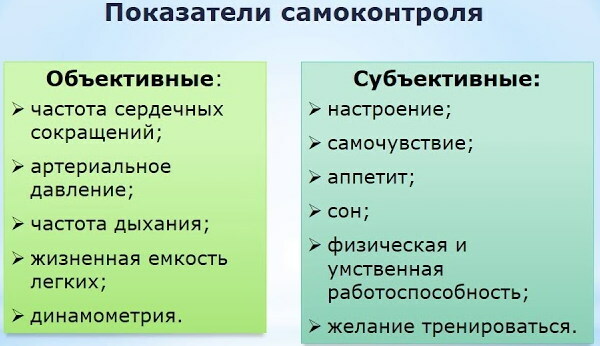 At its core, self-control is an artificial suppression of negative emotions by a person, desires and actions, the mastery of which is necessary for successful work and social and personal interactions.

Techniques for the development of self-control, according to a practicing psychotherapist, gel staff-therapist, candidate of biological sciences Shakhov E.G. include:

Self-restraint as a personality trait is based on a person's ability to voluntarily control the desires of his mind and body, to keep himself within the framework of cultural and moral restrictions. As a vivid sign of a person's maturity, self-restraint is based on tying oneself to moral duty.

A striking example of self-restraint is the acts of the holy martyrs or the voluntary refusal of a person from sweets and alcohol, in favor of the production of natural hormones of pleasure.

The process consists in a person's constant monitoring of their emotions in order to determine their primary or secondary appearance.

All other emotional states are a combination of the primary ones, and are of a secondary nature.

Keeping a diary of emotions

Having decided on the quality of emotions for a person, according to a psychologist and a specialist in the technique of conducting cognitive-behavioral therapy, Guzdova S.L. should start a special diary in which he will track and control his emotions, thoughts, feelings and desires, highlighting problem ones and causing him negative condition.

When a situation arises where emotions can get out of control, a practicing psychotherapist, gelstat-therapist, candidate of biological sciences Shakhova E.G. advises the individual to step back and to switch focus on other emotions using:

As a self-control training, experts advise an individual to use any videos (films, songs, clips) that cause a negative emotional state. While watching, a person should try to restrain his feelings, and in case of feeling of loss of control over them, try to distance himself, switching his attention to other activities.

Assistance in the development of self-control to a person, according to the specialist of gelstat psychology, S.L. Guzdova, will be provided by:

In psychology, the concept of "self-control" is the ability of a person to maintain a calm emotional state even in the most difficult stressful situations. The ability to manage your emotions, feelings and actions is considered by psychologists to be one of the main conditions for a successful life and the realization of a person in social and professional activity, which anyone can master through simple but effective psychological exercise.

How to learn to control your emotions:

Kidney stones - a kind of kidney stone disease, diagnosed, roughly, three percent of the world's population. Men, according to statistics, are mor...

Many people have formed a mistaken idea that hemorrhoids is a purely male disease. This is definitely a misconception, so if there is a question a... 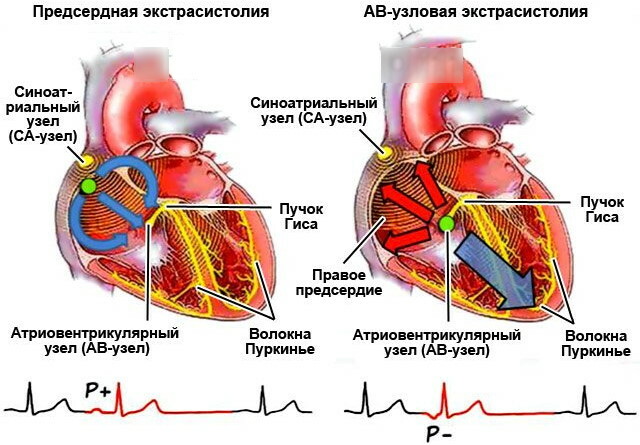 Jerks, heart beats strongly at rest. Reasons for what to do