Carrying oxygen-rich blood from the heart to organs, tissues and all parts the body's vessels are called arteries. The upper and lower extremities are densely entwined with such channels. The only exception is the pulmonary trunk, which carries venous blood from the right cardiac ventricle, which is due to the anatomy and physiology of the body.

Topography and branches of the arteries of the free upper limb

Such vessels serve as an integral part of the systemic circulation. The set of the main and regional arteries of the free upper limb with numerous branches is a single, synchronously functioning hemodynamic mechanism.

Topographic classification of such vessels is widespread. Some arteries have alternative names that have appeared as a result of the revision of the current anatomical nomenclature by the scientific community.

Topographic classification subdivides hematological channels of this type into:

Arteries of the upper limb, the anatomy of which is finally formed in the embryonic period, develop from the mesenchyme - the embryonic connective tissue structure of the meso- and ectodermal origin.

A large number of branches leave each trunk carrying oxygenated blood. Anatomically, such vessels are hollow flexible tubes of cylindrical cross-section with a multilayer structure of the walls.

With successive topographically determined branching, the diameter of their internal space gradually decreases. The total width of the entire vascular network is increased to completely cover the area of ​​blood supply. 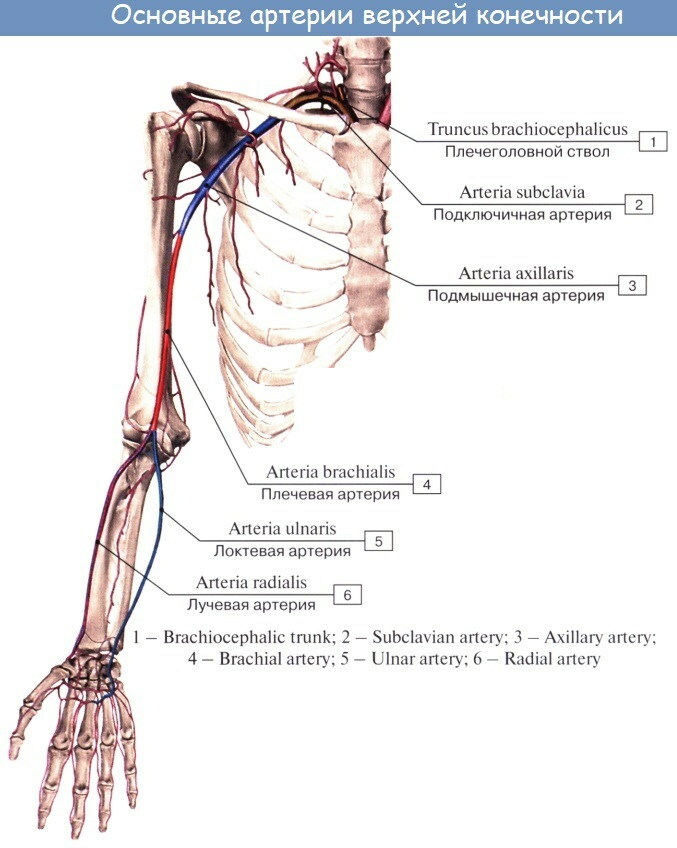 The branches and topography of the arteries of the free upper limb are presented in the table.

The axillary main vessel of the free upper limb in the area of ​​the sternoclavicular triangle is divided into large branches heading to the subscapularis.

The largest diameter is:

The brachial artery is subdivided into the upper and lower collateral sections, the deep branch of the shoulder girdle. Large muscle branches extend from the main trunk. The radial artery is divided into recurrent, superficial-palmar segments, frontal and dorsal-carpal segments.

Each has its own branch network. The topographic structure of the ulnar main channel includes the recurrent, interosseous, palmar-carpal and deep branches. A large number of small arterioles depart from the brachial circulatory system to the adjacent organic tissues. 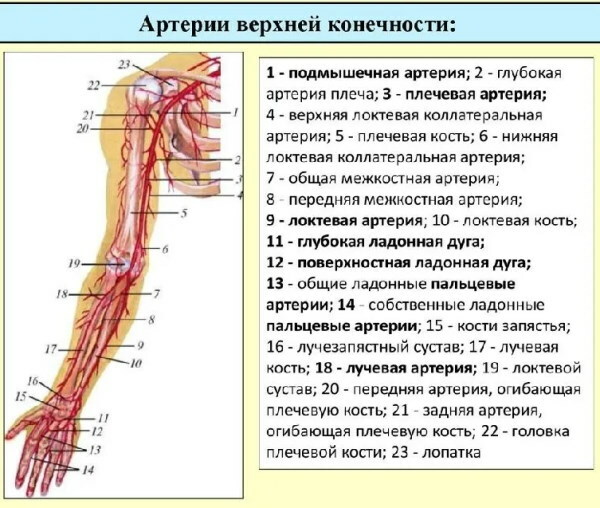 The axillary artery is limited in the proximal plane by the 1st rib, in the distal - by the lower extremity of the major muscle of the chest. Numerous branches of various sizes extend from it.

They nourish the muscle structures, soft tissues and skin of the forearm. The largest branch of the axillary artery is called the subscapularis.

Her area of ​​blood supply:

Palpation can easily determine the location of the brachial artery, which extends from the lower extremity of the greater muscle of the sternum and lies in the medial anatomical depression of the joint of the same name.

Nearby are 2 veins and the median nerve canal.

The area of ​​blood supply to the brachial artery network:

Arteries of the upper limb, the anatomy of which is characterized by a large number of small and large branches, are responsible for the saturation of blood not only with the arms, but also with the back with the shoulder girdle and cervical department.

The main channel goes down to the elbow joint, where it is divided into 2 independent parts. The muscular and subcutaneous branches supply blood to the corresponding organic structures of the bedding zone.

The radial artery stretches parallel to the bone formation of the same name. In the distal plane, it is located close to the surface of the skin, which makes it possible to feel its pulsation during palpation.

The main channel overcomes the styloid process of the radial structure of the skeleton and bends around the back of the wrist, saturating all tissues with blood in the direction of movement to the palmar surface.

The ulnar artery is larger than the radial artery in diameter. Its branches have a more extensive area of ​​blood supply. The ulnar trunk bed lies between the superficial and deep muscle fibers, saturating them with blood.

Near the pisiform bone, a large branch departs from the artery, heading to the vascular arch of the palm. Here she is anastomotic connected to the branches of the radial line.

The elbow zone is characterized by the presence of a rich network of collateral circulation. Its structure is made up of intersecting branches of the radial, brachial and ulnar arteries. In the palmar zone, they form a blood arc. 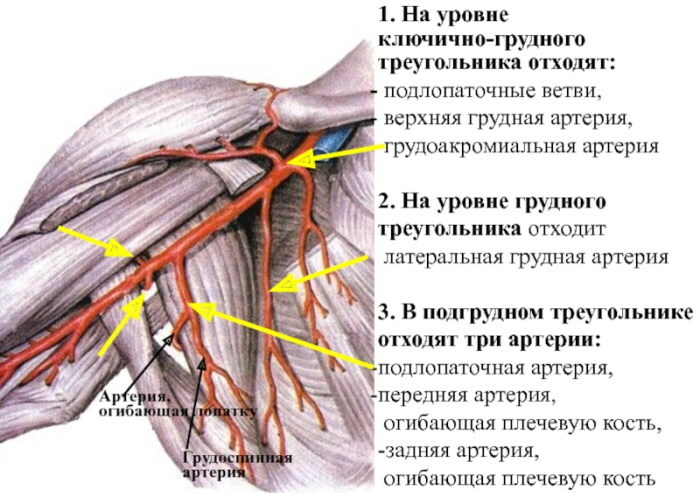 The following arterial channels are responsible for the blood supply to a part of the body:

The deep arc is thinner than the surface one. It is formed by the branches of the lower extremity of the radial artery. The circulatory network is located in the thickness of the interosseous musculature of the palm, responsible for its nutrition.

Arteries of the upper limb

Highways innervate sympathetic nerve fibers with nearby spinal canals. In the upper limb there are 4 large channels that provide blood supply to all organic structures.

Arteries of the hand have 3 types of branching - main, loose and combined. For the first type of character, sequential topography with a gradual decrease in the lumen with distance from the main blood channel.

The loose type of vascular network formation is divided into many multidirectional blood pathways. Combined branching combines both of the previous options.

This topographic structure is characteristic of the arteries of the upper limb. Trunk channels have a meandering or spiraling internal lumen. Collateral blood supply to tissues is carried out by anastomoses.

The main trunk bed feeding the upper limb, the cervical spine, and the anatomical structures of the back. Surrounded by the trunks of the nerve bundle of the shoulder girdle. Divided into 3 sections. Each has its own branched bloodstream. 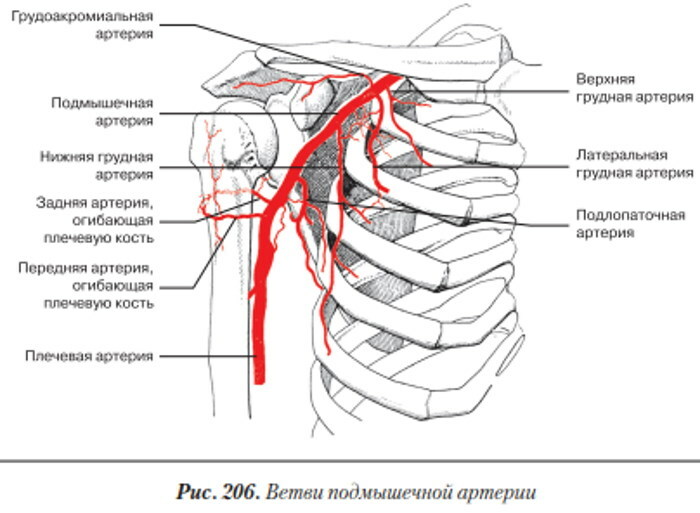 Near the lower extremity of the broadest muscle passes into the brachial artery. The subscapularis branch is divided and goes into the thickness of the muscle of the same name, and the upper sternum is directed to the 1st and 2nd intercostal spaces, for the blood supply of which it is responsible.

The axillary artery contains the acromial vasculature. It feeds all the organic structures of the upper limb down to the wrist. The anatomy of the axillary blood line has an extensive circulatory system.

It is considered a continuation of the previous vessel. The brachial artery begins near the lower extremity of the pectoral muscle. On the entire path of occurrence, it is accompanied by venous channels and fibers conducting nerve impulses.

The blood line of the brachial region between the pronator round and the brachioradialis muscle is divided into 2 separate segments that form their own arterial networks. In the deepening of the elbow joint, its terminal branches begin, stretching to the palmar surface and feeding the fingers.

It originates 1-3 cm below the capsule of the shoulder joint from the bifurcation (bifurcation) of the highway of the same name. It is considered the main bloodstream of the lateral forearm. 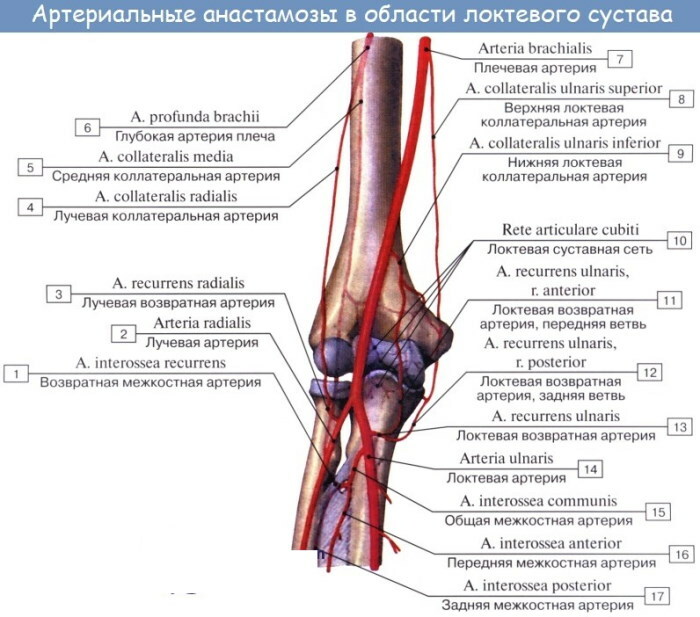 The main vessel carrying oxygenated blood in the medial plane of the forearm. In the area of ​​the superficial arch of the palm, it anastomoses with a large branch of the radial arterial bed.

It lies under the round pronator. It stretches diagonally up to the middle part of the forearm, deviating slightly in the medial direction. The ulnar blood line is accompanied by a nerve of the same name and a pair of large veins with similar names.

In this part of the body, there are several large-diameter vessels that carry oxygenated blood to the tissues. The largest artery in the leg is the femoral artery. It serves as a continuation of the external iliac line.

The bloodstream runs under the ligamentous plexus of the inguinal zone near the vein of the same name. The femoral artery follows through the ridge-iliac groove and crosses the vascular lacuna.

In this zone, it is covered only by the fascia and the skin, which makes the blood pulsation clearly felt when palpated.

Large branches of the femoral artery:

The longest muscle of the human body - the tailor's muscle - covers the femoral blood line all the way.

Serves as a topographic continuation of the previous vessel. The length of the popliteal artery is 16 cm, the inner diameter is 1.3 cm. Transfers large volumes of blood. It feeds the joint of the same name, connective tissues, ligamentous apparatus and other organic structures of the bedding zone.

The arteries of the upper limb (the anatomy is identical to the vessels of other parts of the body) form a single hemodynamic system with similar highways of the leg. The popliteal bloodstream bends around the muscle located here.

The artery forms a branched blood supply network, which includes the following branches:

From the femoral artery there are 3 gastrocnemius channels. They supply oxygenated blood to the head of the muscle of the same name.

The line consists of a front and a back. Each forms its own vascular network. The tibial artery continues the popliteal artery. The back of the channel is located in the ankle canal, leaving it in the area of ​​the soleus muscle.

Numerous branches of various sizes extend from it. 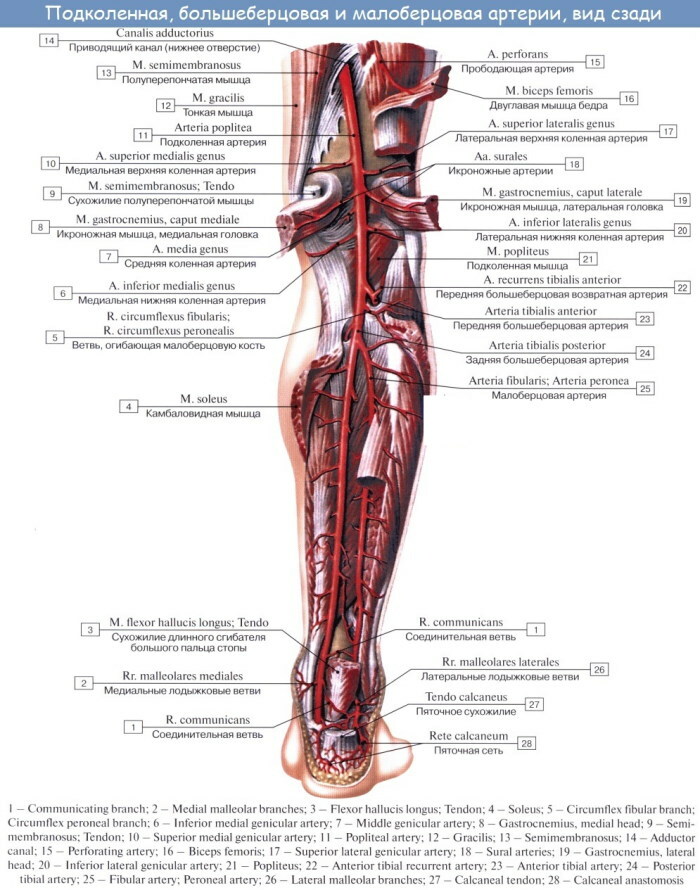 The anterior part of the tibial artery extends to the dorsum of the foot, accompanied by veins and nerve fibers. The vessels departing from it are anastomosed with the lateral branches of the ankle.

Artery of the dorsum of the foot

It passes near the lateral plane of the ankle joint between the tendon structures of the elongated extensor digitorum. The anatomical bed of the dorsal blood line of the foot is a fibrous cavity.

The channel is directed towards the 1st interosseous space of the fingers, upon reaching which it is divided into the metatarsal and deep plantar branches. In this place, the lateral and medial vessels depart from it.

They nourish the anatomical structures of the corresponding planes of the foot. An artery with branches forms an arched vascular network. In the direction of each finger, independent blood corridors stretch.

Ultrasound of the upper limb arteries

Ultrasound examination is considered the most informative and safe method of hardware diagnostics. Ultrasound of the arteries of the upper extremities has become widespread due to the general availability and speed of its implementation. 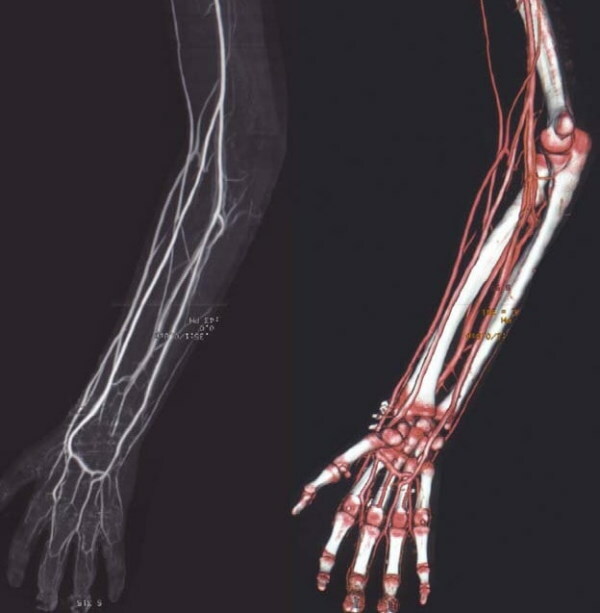 For a detailed assessment of the state of the vessels, Doppler ultrasound is performed. The technique allows you to detect at an early stage:

The technology makes it possible to assess the state of deep-lying arterial beds hidden under the layers of muscle fibers or solid skeletal structures. Duplex scanning is a non-invasive and absolutely painless method of hardware diagnostics.

The arteries of the upper limb, the anatomy and topography of which do not interfere with the passage of the ultrasound wave, are examined in this way when:

Reflecting from the arterial walls, the impulse forms a graphic image on the monitor screen. The technology makes it possible to quantify the blood filling of the great vessels and their branches. Ultrasound diagnostics reveals stenosis and detects aneurysms - deformation changes in the hematological canals.

The examination of the arteries of the upper extremities is shown with a weak pulse, a chronic feeling of heaviness in the hands. The anatomy of the blood vessels makes them suitable for duplex scanning. The procedure does not require special training. The day before the diagnosis, it is recommended to limit the consumption of strong tea and black coffee.

My Resource Mr. Darcy in a most infamous manner. I do not know the particulars, but robots.txt [email protected] Warning: Division b...