Sumatriptan tablets for migraine. Instructions for use, price, reviews

Sumatriptan is a Russian drug to eliminate migraines. The drug allows you to quickly eliminate the headache, while the effect of the drug can last up to 24 hours. But the medication has a large list of side effects, so the pills cannot be taken without a doctor's prescription.

Sumatriptan tablet form is produced in the classic and film-coated tablets. Depending on the manufacturer, the appearance of the tablets can be round or oval. The color of the preparation also changes (white, blue, creamy pink and even red). The tablets are placed in convex transparent blisters in the amount of 2 or 10 pcs. The cardboard box contains 1 plate.

Sumatriptan can also be purchased as a nasal spray.

Components of tablets (conventional and coated) are: 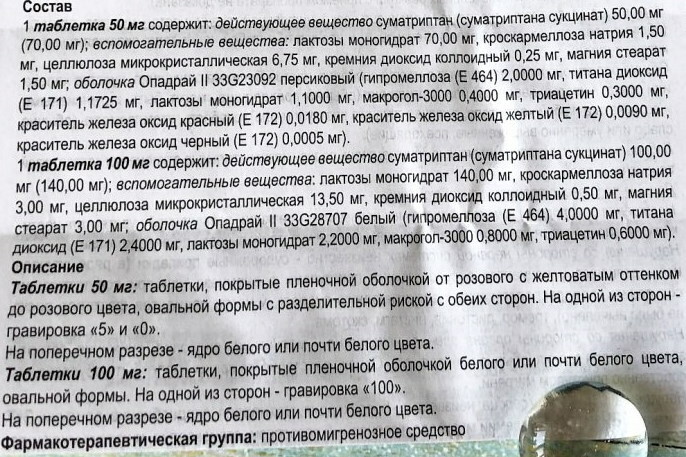 In tablet forms, the active element contains 50 or 100 mg per 1 tablet.

Sumatriptan - migraine pills, which are included in the group of anti-migraine agents.

After oral administration, Sumatriptan tablets have a constricting effect on the dilated or edematous vessels of the brain, as a result of which the headache attack stops. In addition, the drug eliminates nausea, as well as pain and photosensitivity in the eyes that accompany migraines.

The headache begins to gradually decrease 30 minutes after taking the medication, and the maximum analgesic effect occurs approximately in 2-2.5 hours. The effect of the tablets can be maintained for a day. Important. The drug is most effective if taken when the migraine is at its peak, otherwise the drug will need to be taken again after about 24 hours.

Sumatriptan tablets are prescribed by doctors to eliminate migraines, including menstrual headaches, which can develop about 3 days before the onset of menstruation and about 5 days after it ends.

Important. The drug should not be used prophylactically.

Sumatriptan is a migraine pill that is not safe.

Before starting to take the medication, the doctor must exclude contraindications from the patient:

With the following pathologies, Sumatriptan can be taken only under the strict supervision of a physician and at an individual dose.

Tablets are not prescribed for patients under 18 and over 65 years of age. In the first case, the safety of the drug has not been studied, and in the second case, the vessels are already worn out, and the reception the drug can only cause the development of a worsening of their condition, including the development of intracranial bleeding.

Sumatriptan tablets should be swallowed whole with clean water. They use the drug regardless of when there was a meal. At the same time, it is important that if the remedy does not work, then it is forbidden to reuse the pills to eliminate migraine.

Sumatriptan is allowed to be taken again only if the tablet has given a result, and at least 2 hours have passed after using the drug. Otherwise, you should use paracetamol, analgin or acetylsalicylic acid. A single dosage of Sumatriptan can be 50-100 mg, and the daily dosage should not exceed 300 mg. 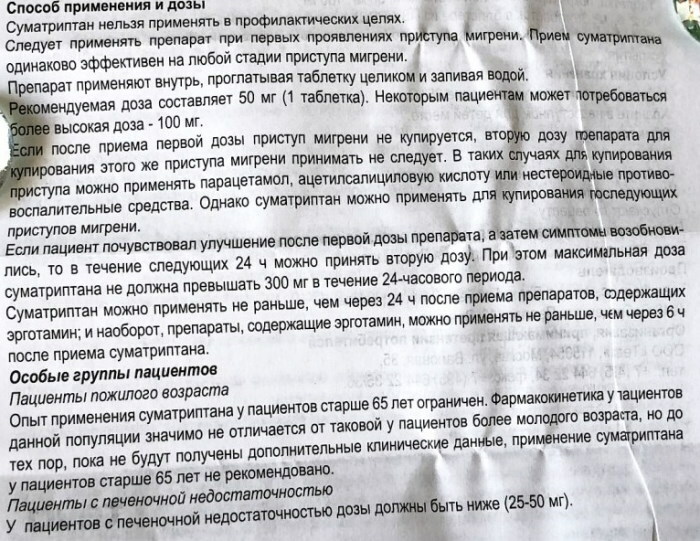 Important. With liver pathologies, it is allowed to take no more than 50 mg of the drug per day.

The use of Sumatriptan tablets can provoke the following side effects:

Not all adverse reactions are the reason for the withdrawal of the medication, therefore, when they appear, a doctor's consultation is required. He will determine the possibility of further taking pills or the need to replace the medication.

Accidental intake of tablets in large quantities (more than 400 mg) one-time, also exceeding the daily dosage, can cause the development of poisoning, which is manifested by the following symptoms: 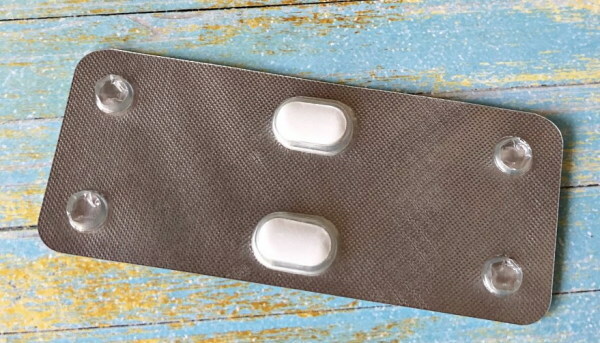 With the development of poisoning, the victim needs to urgently rinse the stomach. Further, the patient should take sorbents, and after about 2 hours, laxatives, to accelerate the withdrawal of the drug from the body. Control over the patient's condition should be carried out for at least 12 hours. Hospitalization may be required depending on the condition of the victim. It is advisable to select symptomatic therapy in conjunction with a doctor.

Sumatriptan - pills for migraine, which can be taken after becoming familiar with the features of the drug, which include:

It is strictly forbidden to combine Sumatriptan with alcohol. Alcoholic drinks have a negative effect on the liver and blood vessels, as a result, the likelihood of side effects increases. 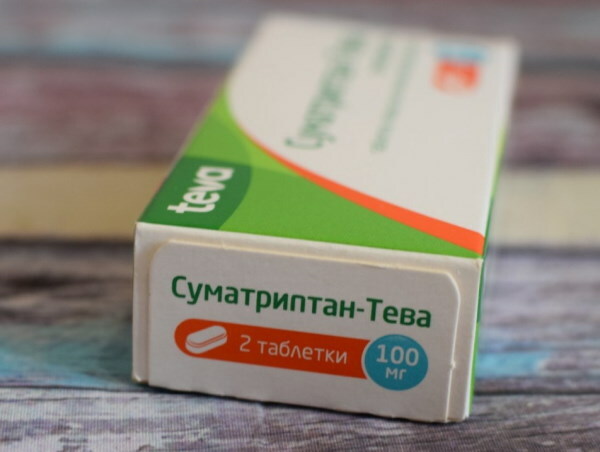 During the period of taking the pills, you cannot drive vehicles and perform hazardous work, as well as those that require special attention.

If the patient is taking other medications before using Sumatriptan tablets or if a complex therapy, then initially it is necessary to clarify with the doctor with which drugs the use is allowed drug Sumatriptan cannot be combined with other medications that include triptan, since an overdose of the main component may develop.

Sumatriptan - pills for migraine, which can be replaced with drugs:

Only a doctor can replace Sumatriptan. The specialist additionally adjusts the course of treatment, taking into account the characteristics of the analogue.

Sumatriptan tablets can only be purchased at a pharmacy and only with a prescription. At home, the drug should be kept away from children and sunlight, and the place should be protected from high humidity. In this case, the temperature at the storage location should be in the range from 4 to 27 degrees above zero. The shelf life of the medication is 5 years.

The cost for Sumatriptan tablets, as well as for analogs discussed in this article, is indicated in the table below.

Sumatriptan can quickly and for a long time eliminate even a severe headache. But at the same time, it is strictly forbidden to use tablets without a doctor's prescription, since contraindications must be carefully excluded. In addition, the drug has a large list of dangerous side effects, including increased migraine, if the drug is not properly dosed.

Video about the drug Sumatriptan 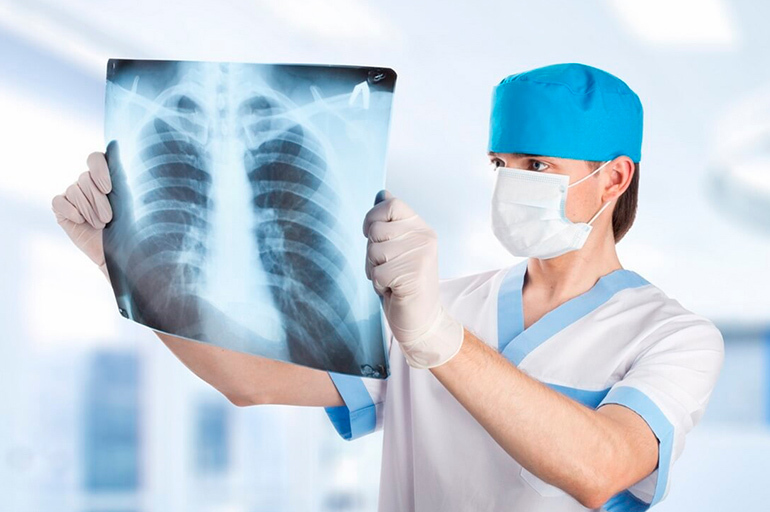 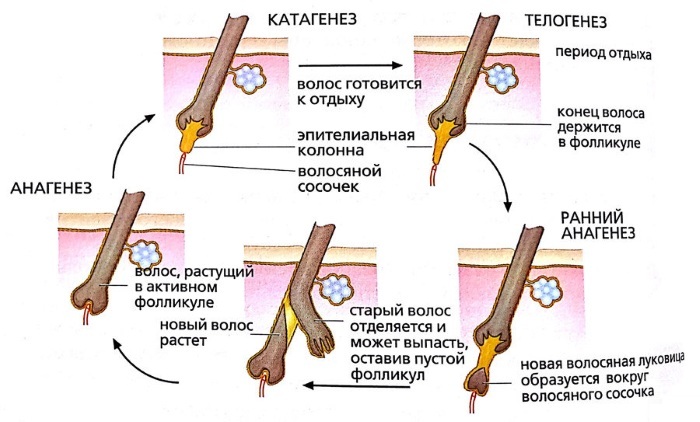 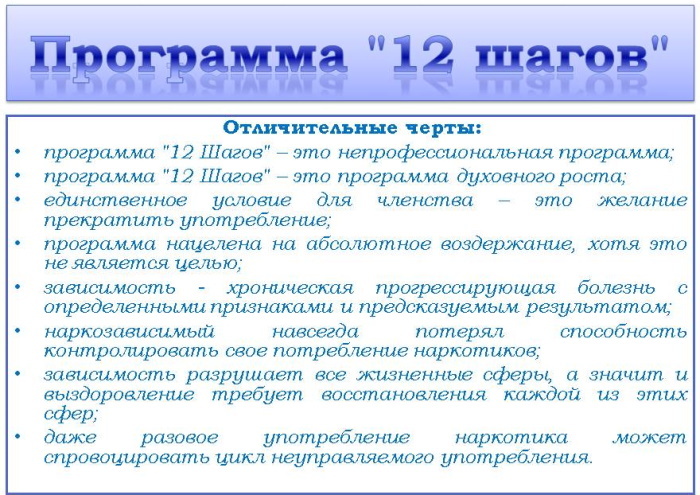