The disease is one of the types of heart failure and is characterized by a sudden violation of the contractile ability of the heart. This leads to a violation of the blood supply to the organ, which is accompanied by the development of severe symptoms.

When a disease occurs, stagnant processes are observed in the pulmonary circulation (in the lungs).

There are 2 main reasons for the development of the disorder. The first has a cardinal (cardinal) nature of origin, the second is non-cardinal.

The development of the disease can be affected by hyperthyroidism, which causes an increase in cardiac output and, as a result, leads to disruption of the left ventricle.

The cause of the development of the disorder is an increase in blood pressure in the pulmonary circulation.

As a result of provoking factors, there is a reverse flow and an increase in the amount of blood in the left atrium and in the area of ​​the pulmonary vascular bed.

As a result of this, edema is formed in the intercellular space, which, in turn, leads to a narrowing of the lumens in the bronchi. In this case, foaming of the fluid flowing in the pulmonary alveoli occurs.

Against the background of such processes, cardiac asthma develops, edema in the lungs is formed.

Acute left ventricular failure is a disease that is classified into several types, depending on the nature of the course and the nature of the origin. This classification allows you to assess the risks to the patient and prescribe the most appropriate therapy.

According to the type of course, the disease is divided into acute and chronic. In the first case, the pathology develops rapidly with pronounced symptoms. This condition is very dangerous and requires immediate treatment. 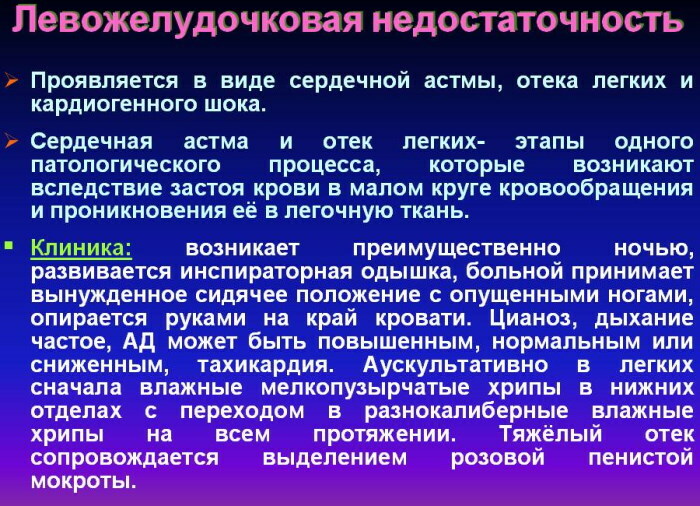 The chronic form manifests itself periodically with alternating remission and exacerbation of symptoms. At the same time, the disease in humans is constantly present and monitored with the help of drugs and systematic research.

In all cases, the pathology requires monitoring by the attending specialist or the appointment of suitable therapy.

According to the duration of the course, the disorder is of several types:

The pathology itself is dangerous not only for health, but also for the patient's life, since it can lead to a sudden death.

By the nature of its origin, the disease is subdivided into cardinal and non-cardinal forms. In the first case, the disease occurs as a result of any internal disturbances in the work of the heart and cardiovascular system, including an infectious lesion. 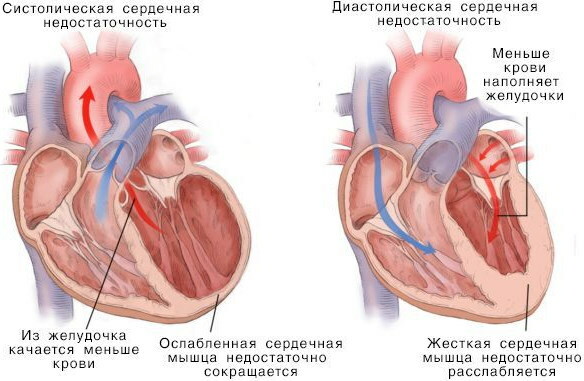 In the non-cardinal type of disorder, signs develop against the background of other external and internal factors that are not interrelated with work or heart disease.

Acute left ventricular failure is a disorder that has characteristic and pronounced symptoms, which allows time suspect the development of the disease and take all necessary measures to prevent the occurrence of those that are dangerous to health and life complications.

The symptomatology of the disease depends on the stage of its course and the presence of additional complicating factors.

At the initial stages, the following signs develop:

In the absence or ineffectiveness of treatment, edema in the lung area occurs, which leads to more pronounced main symptoms. 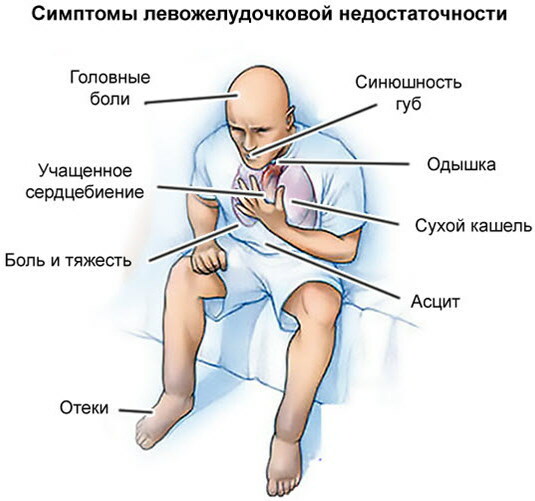 In this case, the following signs develop:

The patient's death occurs against the background of asphyxiation (asphyxiation).

Acute development of left ventricular failure can be determined both using special hardware or instrumental techniques, and by visual examination (based on patient complaints).

Diagnostics allows you to identify the cause of the violation, the severity of its course, and also helps to choose the most effective treatment.

Symptoms at the onset of an attack

First of all, a visual examination of the patient is carried out. The condition of the skin is assessed for signs of cyanosis. Then the specialist conducts listening to the lungs with a stethoscope - the presence of wheezing and noises is examined.

After that, the patient's blood pressure is measured using a tonometer.

Additionally, chest tapping may be performed to determine the accumulation of fluid in the lungs or edema.

Based on the data obtained, a preliminary diagnosis is made, after which the patient is referred for additional laboratory diagnostics.

After passing the laboratory test, hardware methods for examining the patient are assigned.

To determine the cause of the disease and the nature of its course, several main types of instrumental diagnostics are used.

In most cases, these studies are sufficient to make an accurate diagnosis.

How pathology is displayed on the ECG

With the help of an ECG, it is possible to determine the development of the disease, taking into account deviations in certain leads of the isolines.

At the same time, a general disturbance of rhythms and conduction is also noted, hypertrophic changes and overload develop in the region of the left heart.

Acute left ventricular failure is a pathology that requires immediate and rapid treatment measures, since the condition can worsen in a few minutes and lead to lethal outcome. 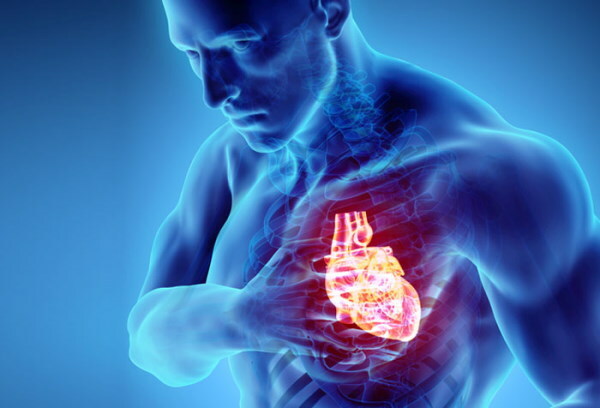 With an attack of acute development of the disease, you should first call the medical team. Before the arrival of an ambulance, it is necessary to provide the patient with the correct body position and medication.

These measures will help to avoid death and save the patient's life. When performing them, it is necessary to strictly observe all the rules prescribed by a specialist, otherwise the effectiveness of such measures may not bring the desired result.

Treatment tactics depend on the form and severity of the pathological process.

In case of development of edema in the lungs, the following complex treatment is carried out:

Also, non-invasive ventilation of the lungs is performed through special catheters that are inserted into the nasal passages.

Medical treatment is mandatory and is prescribed to patients regardless of the stage and severity of the disorder. 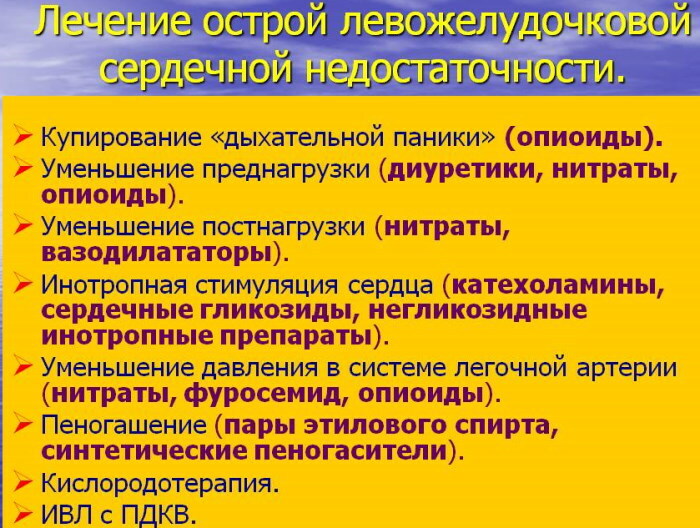 Acute left ventricular failure is a disease that has several stages of its course and developmental stages. This feature must be taken into account when choosing a treatment regimen.

Treatment of the acute form of the disease is determined according to blood pressure.

In the case of increased blood pressure or at its normal level, the following drugs are used:

In the case of stabilization of the patient's condition, he is prescribed further intake of diuretics, nitrates and ACE inhibitors.

All patients who received first aid are subject to compulsory hospitalization in the cardiology or cardiac surgery departments of the hospital.

With pathology, the prognosis for recovery is unfavorable, since in the presence of pulmonary edema, in most cases, patients die. 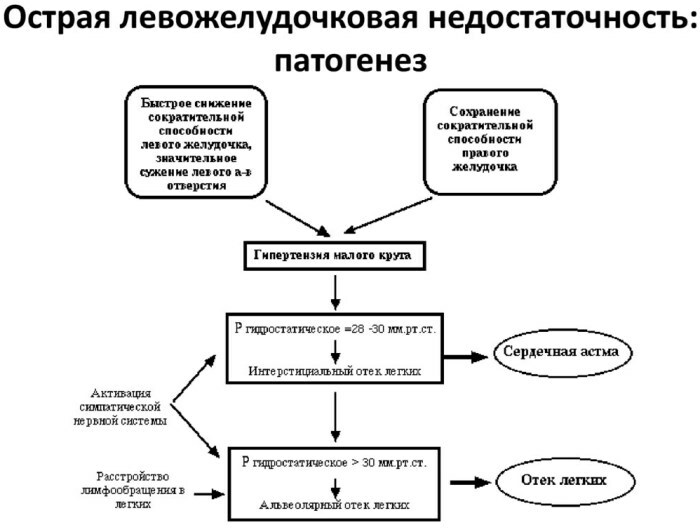 Moreover, the forecast itself depends on many other factors:

In order to avoid the development of the disease, it is necessary to adhere to certain rules that will reduce or completely eliminate the risks of other health problems.

If you develop any symptoms that indicate acute left ventricular failure, you should immediately consult a specialist for help. This will avoid the development of complications and prevent sudden death of the patient.