The first signs and delayed symptoms of cerebral palsy in newborns 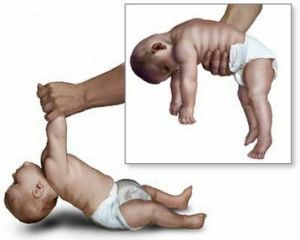 Children's cerebral paralysis is a group of non-progressive chronic diseases that are manifested by various impairments of motor functions as a result of brain damage. But this is not hereditary pathology, but acquired.

However, the effect of etiological factors may be manifested during intrauterine development( due to intrauterine infection, maternal obstetrics, fetal hypoxia and other teratogenic factors).

Damage to the brain can occur during childbirth or in the first weeks after childbirth( as a result of CNS infections or Rh-conflict).

cerebral palsy does not progress, that is, over time, brain damage is not exacerbated, motor defects can be partially corrected. However, in the absence of appropriate methodical exercises and care in children, severe complications may appear.

The first signs that should alert the

Symptoms of cerebral palsy are not always detected immediately after the birth of the child, since the signs can become apparent in infancy. It is important to notice them at an early stage and consult a specialist for setting or refuting the diagnosis.

In general, the signs of cerebral palsy in newborns at an early age are almost invisible, but with a gradual development of the nervous system, symptoms begin to increase.

Parents should be alerted when the following primary symptoms appear:

In the infants, the symptomatology can manifest as a solidification in one position, involuntary movements( head nodding or lack of contact).

It should be noted that the level of signs is associated with the depth of the brain damage, can manifest as light awkwardness in movement, and mental retardation, heavy paresis.

In most cases, specialists are not able to establish an accurate diagnosis of a child for up to a year, even in the presence of pronounced symptoms of pathology( oppressed reflexes, increased excitability, etc.).

The child's brain has a high compensatory ability, which can eliminate the bulk of the consequences of brain damage.

The specialist can confirm the diagnosis if the child does not sit at the age of more than 1 year, will not walk, speak or have mental disorders on his own.

When the brain is affected, the following types of motor disorders can develop: 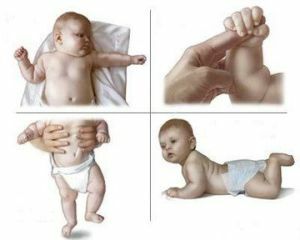 When exposed to damaging factors, various defects of nerve cells can be observed. The cause of the process may be the vulnerability of brain structures, the development of which at this time is intense. Therefore, some children with cerebral palsy may have impaired movements of the hands, in others - coordination or legs.

The majority of cases of cerebral palsy in children who were born before 33 weeks are associated with imperfection of the arteries and immature brain cells. At full-term healthy babies with minor oxygen starvation blood distribution occurs, so that the brain is not affected.

In children with low weight, such a mechanism is absent and hypoxia can lead to the death of certain parts of the brain with the formation of cavities.

In medical practice, there are several stages of development of infantile paralysis:

Each stage has its age indicators and a set of specific symptoms. For example, at an early stage, children's illnesses up to 5 months are considered. In this case, the detection of pathology is very difficult, because of which parents should treat the child with special care.

To the characteristic symptoms of cerebral palsy early in the development of the baby include a strong delay in development and violation of muscle tone. At this age the child must turn his head, grab a toy.

But if he does not do this, the lack of such skills may indicate a developmental breach that could be the first sign of a violation.

It is necessary to pay attention to the motor activity of the child. Sometimes parents think that their child is hyperactive, but 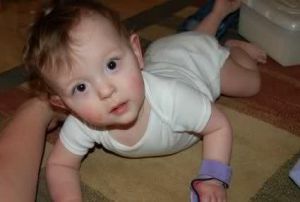 may have seizures, which are another sign of pathology.

Typical details of the residual initial stage are the developmental lag when the child is 0.5-3 years old. At 7 months the child can not sit, showing a grasping reflex, which should no longer be.

Symptoms based on the form of disorder

There are several types of cerebral palsy characterized by symptoms, the level of damage to the nervous system and the brain: 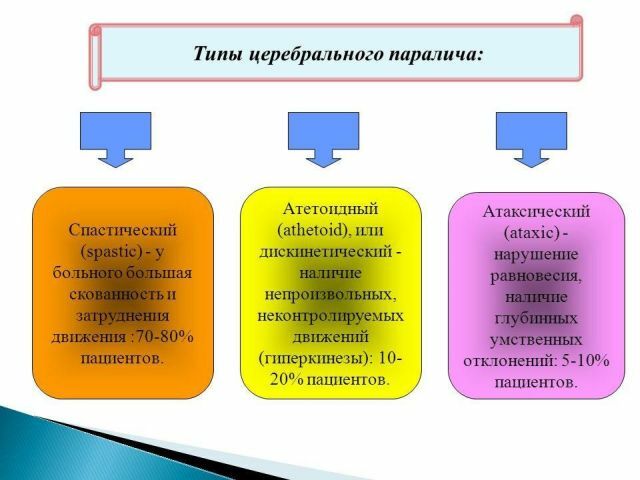 Parents should be attentive to the state of the child so as not to miss the first symptoms of infantile cerebral palsy in the early stages of development. Signs of the disease should be monitored if there was a problem pregnancy, childbirth or mother suffered a disease.

If you start treatment of a child under 3 years of age, then in 75% of cases, cerebral palsy is reversible. And in the treatment of older children, recovery is associated with their mental development. Cerebral palsy does not tend to progress, so when only the motor system is affected, and in the absence of organic brain lesions, you can achieve excellent results in its treatment.

The author - Chuklin Olga, general practitioner, internist. Work experience since 2003.Chronic renal failure is a condition in which the basic func...

Types of abortion: the description, the timing, preparation, complications

Down's syndrome - a genetic abnormality, which is due to the tripling of the 21st chromosome. If a person has normal 23 pairs, or 46 chromosomes is...