Mometasone is a nasal spray that is used for the symptomatic treatment of patients suffering from allergic rhinitis. This drug is aboutbelongs to the pharmacological group of glucocorticosteroids, has a powerful anti-inflammatory formula.

The therapeutic effect of the spray Mometasone is realized due to its direct effect on the process of protein synthesis, inhibiting the biologically active substance phospholipase A2, which takes part in the manifestation of local inflammatory reactions. The average price of this drug varies from 360 to 380 rubles. for 1 bottle.

Forms of release and composition of the drug

Mometasone is a local-spectrum drug that comes in the form of a nasal spray for instillation into the nose. This medication is a completely transparent liquid solution with a specific medicinal odor.

spray is carried out in white plastic bottles with a capacity of 10 ml. Each vial of the drug Mometasone contains at least 60 doses, the injection of which is carried out using a convenient pipette cap.

Pressing the top of the bottle dispenses the drug solution. On average, 1 dose of the spray contains about 50 μg of the active substance. The main packaging of the medication is a cardboard box, on the surface of which white, light green and lilac colors are applied. The price of the drug is fully consistent with its quality indicators.

This medicinal product is completed with detailed instructions for practical use. Spray Mometasone has a simple chemical composition that is completely safe for children of the younger age group. The active component of the drug is the substance mometasone furoate with a concentration of 1%.

The auxiliary function of the glucocorticosteroid is performed by the following ingredients:

The pharmacological formula of the spray Mometasone combines well with various drugs.

This drug can be used as a monotherapeutic agent, or it is included in a complex course of treatment with other potent medicines.

Mometasone is a nasal spray (the price of the drug is affordable for most consumers with an average income level), which has the following pharmacological properties:

In patients with polyposis of the nasal openings, Mometasone nasal spray can partially eliminate nasal congestion, reduces the volume of polyps, improves the trophism of epithelial tissues, which are in a state of chronic inflammation.

Clinical trials of this drug have shown its high degree of effectiveness in the treatment of rhinosinusitis in children aged 12 years and older. The maximum realization of the pharmacological properties of Mometasone is achieved when it is used simultaneously with antihistamines.

The pharmacodynamics of the spray Mometasone is characterized by the local spectrum of action of its active substance. The chemical compound mometasone furoate is of synthetic origin. This is a glucocorticosteroid, which, after getting on the mucous membrane of the nasal canals, has a pronounced anti-inflammatory effect. 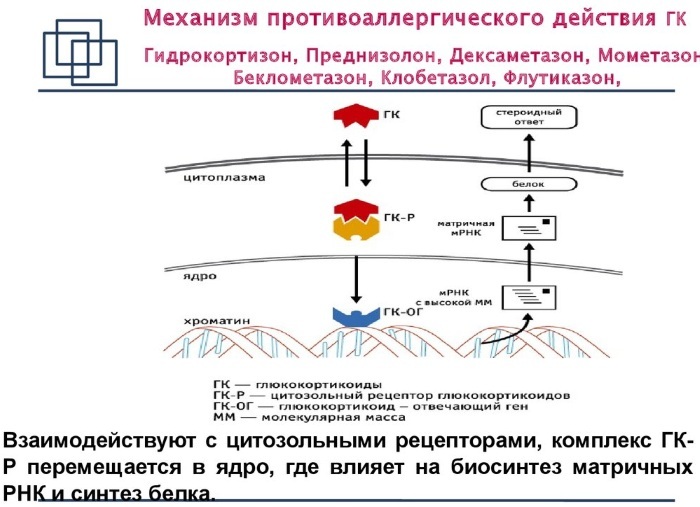 The therapeutic effect of this component is realized in therapeutic doses, the mass fraction of which is not capable of provoking the development of negative effects and reactions of the human body. The mechanism of the implementation of the anti-allergic and anti-inflammatory properties of the spray lies in its effect on the body's receptors responsible for the release of leukocytes, as well as leukotrienes.

The pharmacological activity of mometasone furoate is 10 times higher than that of other steroids with an anti-inflammatory spectrum of action. Spray Mometasone is equally effective in the treatment of patients with mild and severe allergic rhinitis, the presence of large swelling of the nasal mucosa and epithelial tissues.

A pronounced therapeutic effect occurs already in the first 12 hours from the beginning of the use of this drug. Complete relief with the restoration of nasal breathing occurs within 36 hours of regular use of the spray.

At all stages of the study, the drug showed high therapeutic efficacy with a minimal likelihood of side effects. After completion of the course of treatment, relapses of the pathological state of the nasal canals were practically not observed.

The pharmacokinetics of the spray Mometasone is characterized by the minimum absorption of its constituent substance into the general bloodstream. The biological availability of mometasone furoate in blood plasma is no more than 1%. A medicinal spray that enters the nasopharynx and then is swallowed along with saliva is practically not absorbed into the walls of the gastrointestinal tract.

Under the influence of digestive enzymes, this substance undergoes active chemical decomposition. The products of the primary metabolism are excreted from the patient's body along with urine and feces.

The main pharmacokinetic properties of the nasal spray Mometasone are realized in the area of ​​its direct application without creating a drug load on the liver and kidney tissues.

Mometasone is a nasal spray (the price of the medication is much lower than that of drugs with similar properties), which is used to treat adults and children.

This medication is indicated for use in the following cases:

The appointment of the spray Mometasone should be carried out only by the attending physician, allergist or otolaryngologist according to the results of a preliminary examination of the patient. The cause of rhinitis is established without fail, and measures are taken to eliminate it.

For children, this drug is prescribed by a pediatrician. Mometasone can be included in a comprehensive course of antihistamine therapy when an allergy provoked inflammation of the nasal mucosa. The nasal spray can help speed up the process of nasopharyngeal tissue repair.

Mometasone is a nasal spray (the price of the drug is at an average level), which has a minimum number of restrictions on its use.

This drug is contraindicated for therapeutic use in the presence of the following circumstances:

Mometasone nasal spray is not recommended for women who are pregnant. This drug is strictly prohibited for patients lactating a baby with breast milk. To relieve the symptoms of nasal polyposis, Mometasone spray can only be used in patients who are at least 18 years of age.

Mometasone is a nasal spray (the price of the medication corresponds to its quality characteristics), which is allowed to be used to eliminate rhinitis in children aged 3 years and older. In relation to young patients, the drug is not used, since there is no laboratory-confirmed data on its safety for patients in this category.

Before using Mometasone, you should take a spray bottle, and then shake it thoroughly to mix the medicinal solution. 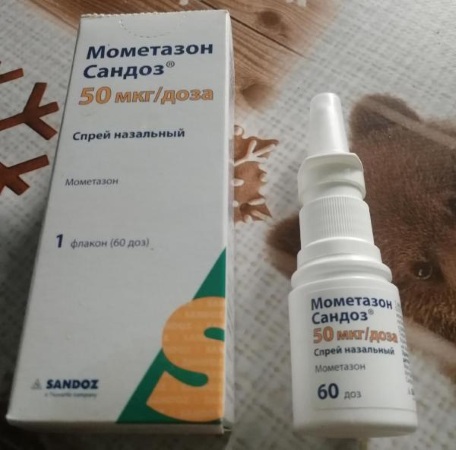 After that, the following rules for the use of this medication must be followed:

After the expiration of the specified period of time, the patient can return to his usual way of life. The dosage of the drug is determined individually by the attending physician and depends on the type of disease. Children aged 3 to 11 years with signs of allergic rhinitis or runny nose, provoked by other factors, should receive 1 injection of Mometasone in each nostril.

The drug is used once a day at the same time. A child aged 12 years and older, as well as adult patients, use 2 spray injections into each nasal opening. In this case, the medication is also used no more than once a day.

In the absence of a positive therapeutic effect, the dosage can be increased to 4 injections in each nostril. The total duration of treatment depends on the severity and type of the disease, as well as the body's response to the action of the glucocorticosteroid substance.

Patients who are prone to seasonal allergic rhinitis should start using this drug 3-5 days before the estimated date of occurrence of the potential irritant. For example, the flowering of a particular plant species.

If, within 5-6 weeks of therapy with Mometasone spray, it is not possible to completely stop the runny nose, remove inflammation, itching and burning inside the nasal passages, it is necessary to consider the use of more potent funds.

Mometasone nasal spray is well tolerated by children, adults and elderly patients. Despite this, the occurrence of the following side effects is not excluded, which appear within 1 hour. after applying the drug to the nasal mucosa:

Patients with individual intolerance to the constituent components of the spray may face an exacerbation of an allergic reaction. In this case, the mucous membrane of the nasal canals becomes even more red, irritated, itching, burning sensation intensifies, and lacrimation is added.

If side effects of Mometasone appear, it is necessary to stop further use of this drug, and also inform the attending physician about the incident who prescribed this medication.

Due to the local action of Mometasone, an overdose of this drug is unlikely. In the case of too frequent use of the spray without observing the rules of the instruction, the development of allergic reactions, as well as the appearance of side effects, which are described in the section above, are not excluded.

An excess amount of this drug that has entered the gastrointestinal tract can provoke nausea, vomiting, spasmodic pain in the abdomen, as well as cause suppression of the functional activity of the hypothalamus, pituitary gland and adrenal glands.

Patients with signs of an overdose with Mometasone spray should receive symptomatic therapy, depending on the pathological signs that were found in them. In the event of an exacerbation of an allergic reaction, it will be necessary to take antihistamines in an injection and tablet form of release.

Patients with an oral overdose of Mometasone undergo a gastric lavage procedure, receive intravenous droppers of physical solution and glucose. At this stage of therapy, the main task of physicians is to cleanse the patient's blood from mometasone furoate metabolites.

Mometasone can cause local immunosuppression. In this regard, for the period of treatment with this drug, it is recommended to avoid contact with a wide range of people, as well as limit yourself to visiting public places.

The nasal spray is not recommended for patients diagnosed with open or latent tuberculosis of the respiratory tract.

It is necessary to exclude the use of Mometasone in relation to patients who have inflammation of the nasal mucosa caused by a bacterial, viral or fungal infection.

Patients taking a nasal spray on a regular basis should every 3 months. be examined by an otolaryngologist for negative changes in the nasal mucosa.

Mometasone nasal spray works well with antihistamines, the pharmacological properties of which are aimed at eliminating signs of an allergic reaction.

It is not recommended to carry out the parallel use of other drugs of the local spectrum of action, which also belong to the category of glucocorticosteroids. Otherwise, allergy symptoms may worsen or side effects may occur.

Analogues for children and adults

The table below lists topical nasal sprays that are analogs of the drug Mometasone:

Unauthorized use of analog drugs is strictly prohibited. These medications should only be prescribed by the attending physician.

To buy a bottle of Mometasone nasal spray, you will need to present a prescription from your doctor. Storage of the medication should be carried out at a temperature not higher than +25 degrees, away from direct sunlight. The general shelf life of the drug is 2 years. After opening the bottle cap, the medicinal solution can be stored for no more than 2 months.

In retail pharmacy chains, the cost of 1 bottle of Mometasone spray varies from 360 to 380 rubles.

Mometasone nasal spray is an effective topical drug for allergic rhinitis. This drug has a pronounced anti-inflammatory effect, relieves swelling, itching and burning of the nasal mucosa.

Mometasone can be used during the seasonal manifestation of allergies, as well as throughout the year. Patients with signs of individual intolerance to glucocorticosteroids should refrain from using this drug. The price of a nasal spray is affordable for most middle-income working citizens.

My Resource glad to see them; he had felt their importance in the family circle. The mysql_connect Bourgh when the living of Hunsford was vacant; a...