Prednisolone for anaphylactic shock. Doses of administration, mechanism of action in children, adults

Anaphylactic shock is a pathological condition of the body, which is actually the most acute manifestation of an allergic reaction. The symptoms of this ailment appear instantly within a few seconds, or they appear several hours later from the moment of contact with the allergen. In 10-20% of cases, an attack of anaphylactic shock is fatal.

It is extremely important that the patient who has the first symptoms of this pathology is administered potent antiallergic and antispasmodic drugs. Stabilize the condition of a patient who has undergone an attack of anaphylactic shock allows timely reception of Prednisolone, as well as other medications with glucocorticoid properties.

The clinical manifestations of anaphylactic shock largely depend on the effect of which allergen provoked an acute allergic reaction. 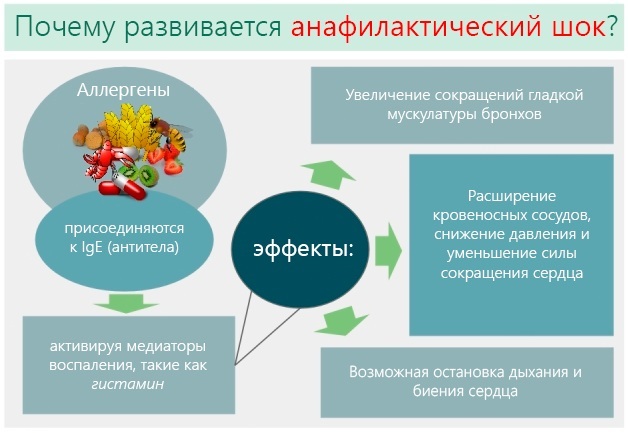 This type of pathological state of the body is accompanied by the following symptoms:

The above symptoms of anaphylactic shock may appear within 1-2 minutes. In most cases, people who are in close proximity to the victim do not always have time to understand the reason for the unsatisfactory state of health of the patient.

First aid for an attack

When the first signs of anaphylactic shock appear, a person should receive emergency medical care, which consists in performing the following algorithm of actions:

In the absence of medical equipment and increasing respiratory failure, artificial respiration is performed. At this stage of the provision of emergency care, the patient may require urgent intubation with a connection to a ventilator.

In the absence of the possibility of artificial ventilation of the lungs, they resort to tracheostomy. The walls of the victim's larynx are pierced with 6 injection needles, which have a wide lumen diameter.

When signs of an acute allergic reaction appear, not only Prednisolone solution is used, but also a complex other medications that allow you to restore the stable functioning of the heart, respiratory system and Central nervous system. The table below lists the main types of drugs that are used to treat anaphylactic shock attacks.

The mechanism of action of Prednisolone for allergies

Prednisolone with anaphylactic shock acts slowly, but the medication has an excellent prolonged effect. Unlike drugs based on adrenaline, the implementation of the therapeutic properties of glucocorticoids occurs after several tens of minutes.

At the same time, medications of this category provide a longer protection of the body from the occurrence of a repeated attack of anaphylactic shock. For example, if there is still an excessive amount of allergens in the patient's blood or in his digestive tract.

Prednisolone is a synthetic glucocorticoid, which is a complete analogue of hydrocortisone. The implementation of the therapeutic properties of this medication is carried out due to its pronounced antiallergic and immunosuppressive effects on the patient's body.

Prednisolone inhibits the process of proliferation of T-lymphocytes, which are directly involved in an acute immune reaction that occurs after contact with a potential allergen.

The constituent components of this drug slow down the release of cytokines from the structure of lymphocytes, reduce the intensity of the formation of specific antibodies, the appearance of which is also characteristic under conditions of anaphylactic shock.

The pronounced antiallergic properties of Prednisolone are manifested by reducing the intensity of production and secretion of mediators of an allergic reaction. The process of a slower release of histamine basophils, as well as mast cells, starts. The quantitative indicator of free basophils and lymphocytes decreases.

During the period of action of the constituent components of Prednisolone, the development of connective and lymphoid tissue, the sensitivity of cells of the effector type in relation to potential allergens decreases irritants.

The physiological process of the formation of specific antibodies is suppressed, and the saturation of the immune response is completely changed towards its weakening.

After injection, the active substance of this drug in the form of prednisolone converted to form of sodium phosphate, quickly saturates the composition of the patient's bloodstream, binding by 90% to proteins plasma. Metabolism of Prednisolone occurs in the liver tissues, and its excretion is carried out by the kidneys.

Metabolites that are formed as a result of the breakdown of this medication do not show biochemical activity. About 20% of Prednisolone is excreted by the kidneys in an absolutely unchanged form. The rest of the medication is disposed of in the form of metabolites. The half-life of this substance is 2 to 3 hours after intravenous injection.

What drugs should be combined with Prednisolone for anaphylactic shock?

Prednisolone for anaphylactic shock is administered in combination with other drugs that stimulate work cardiovascular system, inhibit the sensitivity of histamine receptors, have immunosuppressive and anti-allergic action.

During the onset of symptoms of anaphylaxis in combination with Prednisolone, the following medications should be used simultaneously:

The above drugs do not enter into negative drug interaction with Prednisolone injection solution, but only enhance its anti-shock and antiallergic properties. The combination of these medicines makes it possible to stabilize the patient's condition with signs of anaphylactic shock, as well as to avoid negative consequences in the form of a lethal outcome.

Advantages of the drug in comparison with other antiallergic drugs

The following main advantages of this drug are distinguished over other antiallergic drugs:

In combination with immunosuppressive and antiallergic properties, Prednisolone has a pronounced anti-inflammatory effect, which is extremely important in situations where anaphylaxis develops after a poisonous insect bite or a reptile. In this case, the medication will eliminate the inflammation of the epithelial tissues, and also accelerate the process of their regeneration.

Prednisolone for anaphylactic shock is not used as an emergency drug in the presence of direct medical contraindications.

This medication is prohibited for use in patients who have an individual intolerance to prednisolone and other chemicals based on it. Precautions are justified by the significant risk of aggravation of the manifestations of an acute allergic reaction with further progression of already developed anaphylaxis.

At the same time, Prednisolone is prescribed with extreme caution to patients who have the following diseases:

Patients with these diseases should be under constant supervision by medical personnel throughout the entire period of anti-shock therapy. In the event of signs of the development of side effects or exacerbation of concomitant diseases, further use of Prednisolone is contraindicated.

During therapy with the drug Prednisolone, it is necessary to observe the following health precautions:

During the period of prolonged therapy with Prednisolone, it should be borne in mind that this drug increases the concentration of 11- and 17-oxyketocorticosteroids. In patients who have previously suffered a myocardial infarction or suffer from liver cirrhosis, the progression of these diseases with further destruction of the affected tissues is possible.

The dosage regimen of Prednisolone in relation to patients with signs of anaphylaxis is established by the attending physician, taking into account the severity of the patient's condition.

Patients of the adult age group who are in a state of anaphylactic shock are shown a jet intravenous administration of Prednisolone at a dosage of 50 to 150 mg of the active substance. In severe cases, this dose can be increased to 400 mg. 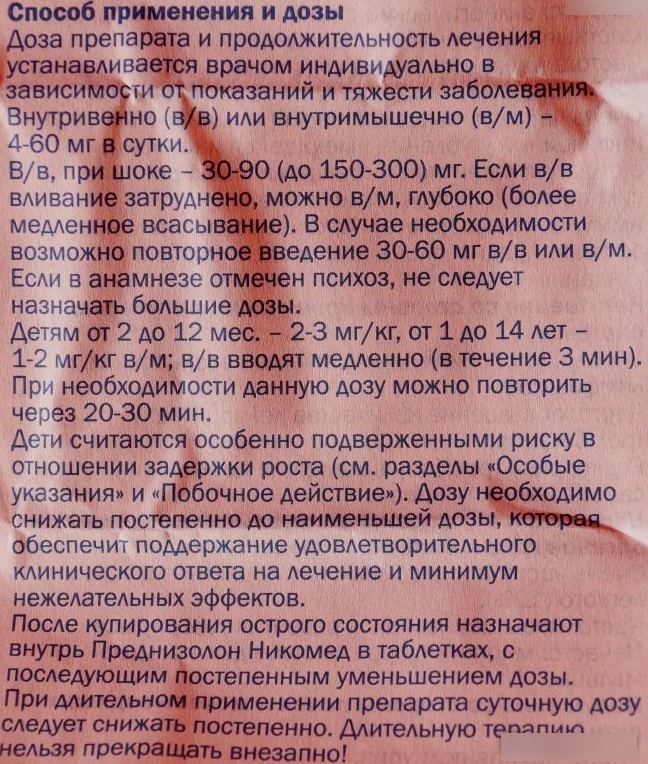 After stabilization of the patient's condition, normalization of blood pressure indicators, further administration of Prednisolone is carried out intravenously, but already as part of a drip solution. Re-use of this drug is possible within a 3-4 hour interval.

For adult patients, the average daily dose of Prednisolone is from 300 to 1200 mg, with a subsequent decrease as the state of health improves. It is important to remember that abrupt cessation of therapy with this drug can provoke a withdrawal syndrome.

For children by age

For children of all age groups, whose body is still growing, the use of Prednisolone is possible only in extreme cases, when there is a real threat to the child's life.

Determination of the glucocorticoid dose is carried out individually by the attending physician, who assesses the severity of anaphylaxis. After the injection of the drug, the child remains in the inpatient department of the hospital under the round-the-clock supervision of medical personnel.

What is the correct way and where to inject the medicine?

In case of anaphylactic shock, the dosed use of Prednisolone should be administered intravenously. To eliminate the acute phase of an attack, the drug is injected in a stream.

Then the medication is prescribed as part of drip solutions, developing an individual treatment regimen. In the absence of the possibility of intravenous administration due to the unsatisfactory state of the blood vessels, Prednisolone is prescribed intramuscularly.

How quickly does the effect of Prednisolone appear?

The therapeutic effect of intravenous administration of Prednisolone using the jet method is felt already after 10-15 minutes. after using the medication.

How often can the drug be used?

Prednisolone can be used for symptomatic and course therapy of acute allergic reactions.

The frequency of use of this medication is determined by the doctor.

What if Prednisolone does not help?

In the event that after the use of Prednisolone there are no signs of a positive therapeutic effect, then the attending physician may decide to use glucocorticoid preparations of other species. For example, Methylprednisolone or Dexamethasone.

Can the drug be used during pregnancy, HB?

For women who are in a state of pregnancy, the appointment of Prednisolone is carried out only in extreme cases, when there is a real threat to the life of the expectant mother. In this situation, the medication is used for symptomatic therapy to relieve acute manifestations of anaphylaxis.

Course treatment with this medication causes fetal growth disorders, and also leads to atrophic processes in the structure of the child's adrenal cortex. Prednisolone is not used during breastfeeding of a newborn. In this case, you will need to stop further lactation.

Prednisolone is an effective drug that belongs to the pharmaco-therapeutic group of glucocorticoids. This medication has anti-inflammatory, immunosuppressive, anti-allergic properties.

The appointment of a dosed intake of Prednisolone allows you to eliminate the acute symptoms of anaphylaxis, stabilize blood pressure indicators and relieve swelling of the mucous membranes. In anaphylactic shock, the first dose of glucocorticoid is administered intravenously by a jet method. In the future, the medication is used as part of drip solutions. The duration of therapy is determined by the doctor.

Review of the doctor about the drug Prednisolone: 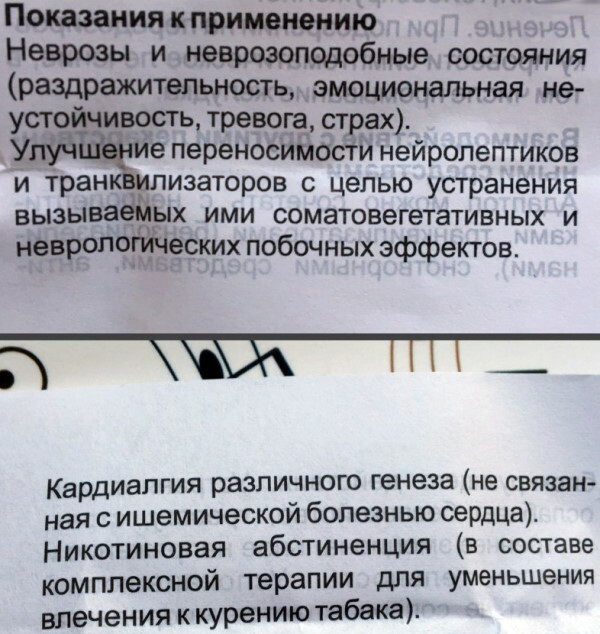 Is Adaptol prescription or not? Side effects

ContentTerms of salePriceIndications for useSide effectsVideo about the drug AdaptolAdaptol is called "soft" or a "daytime" tranquilizer. This is a...

Cocci in a smear in men. What is it, the norm of gram cocci, single small sticks

ContentWhat are cocci and their varietiesWhen men are prescribed a smear analysis, preparation for the study, an algorithm for taking materialNorms... 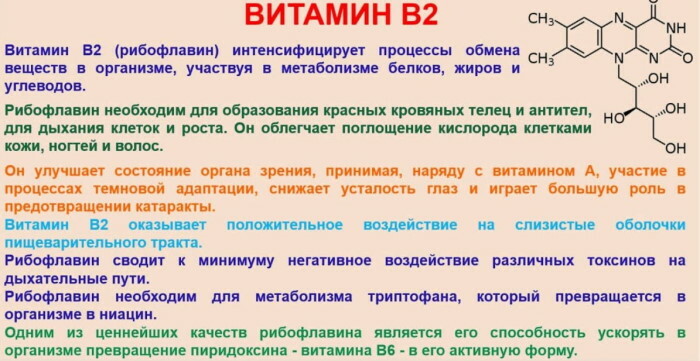 ContentThe principle and mechanism of action of riboflavin on the bodyIndications for the use of vitamin B2ContraindicationsSide effects and overdo...