Clicks in the abdomen during early, late pregnancy

During pregnancy, women are especially attentive to the emergence of new sensations and changes in the body. One of these phenomena is belly clicks. It is important to understand their characteristics and causes of occurrence in order to prevent serious problems and difficult childbirth.

How and where do abdominal clicks feel during pregnancy?

Belly clicks during pregnancy most often occur in the navel area. In this place are the most delicate muscles that separate the fetus from the outside world. Sometimes the sound of a click can be heard in the area of ​​the ribs, and somewhere in the area of ​​the uterus. These sounds can be distinct or, conversely, muffled. It depends on the position of the child, which is constantly changing. They can be accompanied by slight fetal movement or small tremors that rarely cause discomfort.

Causes of clicks in early pregnancy

Clicks in the abdomen during pregnancy mainly appear in the later stages - after 30 weeks. In the earlier period, they are rare. The likely cause of their occurrence at this time may be the restructuring of the female body. Often, pregnant women have metabolic disorders, digestive problems, and more. Therefore, clicks can be caused by these phenomena. 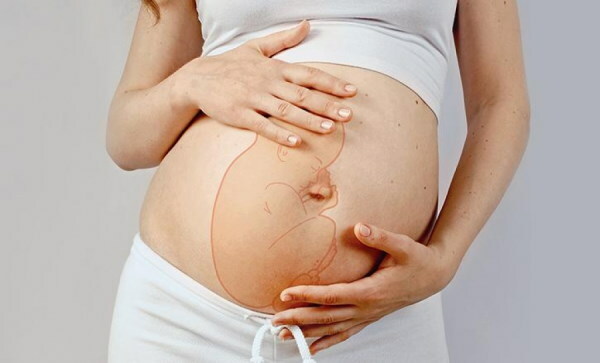 If they occur frequently and bother you, you should seek the advice of your attending gynecologist.

Possible causes of clicks in the belly in late pregnancy, associated symptoms

There can be several reasons for the appearance of clicks - even doctors cannot give a definite answer. Most often, in the absence of unpleasant symptoms, they are attributed to natural physiological processes that do not pose a threat to a pregnant woman and an unborn child. But there may be other reasons indicating a possible pathology.

Physiological reasons, in most cases, are associated with the ongoing processes in the female body and the functioning of the child. A more detailed description of the main reasons is presented in the following table.

The bladder with amniotic fluid bursts at the onset of labor. If this happens earlier, it can cause various complications - fetal hypoxia, placental abruption, rapid or prolonged labor, infection. Therefore, if a sharp click, crackle or crunch occurs, you should immediately go to the hospital or call an ambulance. 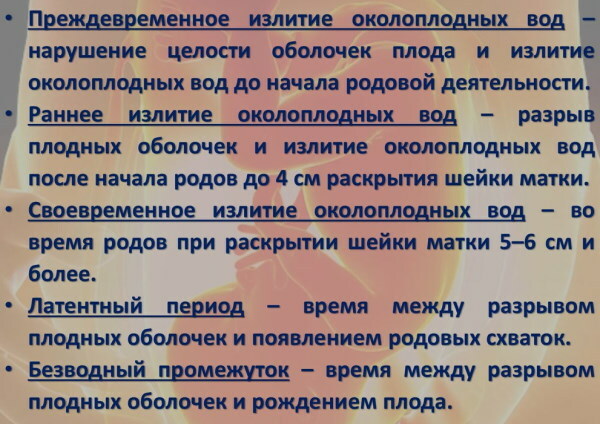 Along with the click, there is often a sharp release of a large amount of amniotic fluid of pink or transparent color. Sometimes there is a slow outpouring of fluid. When changing the position or lying down, its emphasis increases. A characteristic feature is a partial reduction in size of the abdomen.

Symphysiopathy is a condition in which the pubic bones diverge by more than 0.5 cm. It is caused by the action of the hormone relaxin. It softens the ligaments, preparing the body for the upcoming birth.

As a result, a woman may hear periodic clicks accompanied by one or more symptoms:

This condition develops against the background of multiple pregnancies and with a large fetal weight. The most prone to this phenomenon are women with bone injuries (bone fractures, fractures, punctures, etc.). It can also be the anatomical structure of the bones or congenital pathologies. In the latter version, the attending gynecologist should be warned in advance in order to choose a possible option to reduce the load on the bones.

Taking calcium supplements will also help alleviate the condition. With severe pain, it is possible to use pain relievers (strictly according to the doctor's prescription). It is important to constantly control weight and avoid weight gain - excess stress will increase the pain.

Symphysiopathy requires correction, otherwise, during childbirth, the likelihood of rupture of the pubic symphysis is high. And this can even lead to a woman's disability. Therefore, in case of identified pathology, it is recommended to carry out a cesarean section. The best diagnostic option is X-ray. However, it is not recommended during pregnancy. The diagnosis is made on the basis of the woman's complaints and examination by a doctor.

"Bursting of bubbles" with polyhydramnios

High water is referred to as a pathological condition during pregnancy. With its development, there is an increase in amniotic fluid over 1.5 liters. This is a fairly rare occurrence, occurring in about 0.6% of women. The main reasons for its appearance include the Rh-conflict of the unborn child with the mother, infection of the placenta and membranes around the fetus, certain chronic diseases in a woman. Most often, polyhydramnios occurs in the 3rd trimester, as well as when carrying twins.

As a result of the increase in water, their gurgling occurs, in which liquid bubbles burst. It is their women who are often mistaken for clicks. The most reliable symptom of pathology is the discrepancy between the size (circumference) of the abdomen of a pregnant woman and the actual period.

There may also be abdominal pain and a feeling of heaviness, swelling of the legs, shortness of breath. If such symptoms are detected, you should contact your attending gynecologist. If you suspect polyhydramnios, ultrasound diagnostics are often performed.

Ignoring these symptoms can lead to a number of complications:

Polyhydramnios in a pregnant woman requires constant medical supervision. In severe cases, a woman is placed in a hospital to monitor her condition.

Clicks with an umbilical hernia

Clicks in the abdomen during pregnancy can also indicate the occurrence of an umbilical hernia. It develops as a result of the increased pressure on the abdominal cavity as the child grows. This problem is more likely to affect women who have weak muscles of the umbilical ring, have a hereditary predisposition, a woman over 30 years old, or with repeated pregnancy. 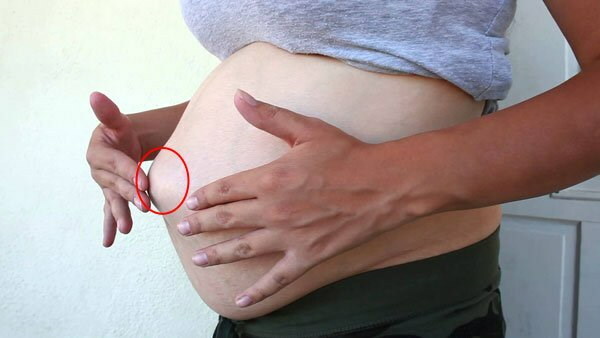 In most cases, the hernia is asymptomatic and does not cause discomfort in women. It can manifest itself visually in the form of a bulge in the navel or the navel itself. When you press on this area, a characteristic click is heard. In difficult cases, a hernia may be accompanied by a constant feeling of nausea, pain in the navel, constant belching, and constipation. No treatment is given during pregnancy.

If after childbirth there is a clicking and protrusion, an appropriate adjustment is made. In a situation where a pinched hernia is diagnosed, it is necessary to carry out urgent surgical intervention to remove it.

It is undesirable for pregnant women to administer anesthesia, however, this situation threatens with complications - in the early stages it there may be a spontaneous abortion, and at a later date we are talking about false contractions and premature childbirth. If the time permits, then together with the operation to remove the hernia, a cesarean section is performed.

What does the location of the clicks indicate?

If the sound of clicks is heard from different parts of the abdomen, then they are caused by the movements of the child. Also, this sound may be heard more or less depending on the position of the child.

Localization of clicks in one area may indicate that the reason is associated with the processes taking place in the woman's body. In this case, the intensity and audibility of the clicks will be approximately the same.

How can I determine the exact cause of the clicks?

Since the clicks have several causes, it is difficult to establish the exact one. To exclude the development of dangerous pathologies, you can seek advice from the attending gynecologist. A more detailed examination using ultrasound and unscheduled blood donation will help to exclude dangerous conditions.

Also, some features of clicks are important in diagnostics:

If the clicks are constantly heard at the time of eating or after it, then most likely they are emitted by the stomach or intestines.

Recommendations for pregnant women with clicks in the stomach

Clicks in the abdomen during gestation in the absence of other symptoms are not dangerous. This will be confirmed by good results on blood tests and ultrasound.

Therefore, a woman is recommended:

Belly clicks are normal during late pregnancy. If they do not cause discomfort and are not accompanied by pain and other unpleasant symptoms, do not worry.

Video about clicks in the belly during pregnancy

Clicks in the stomach during pregnancy: 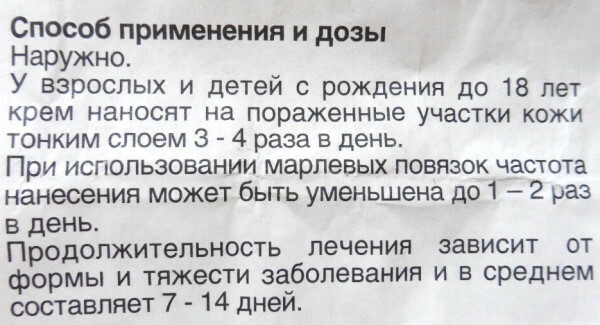 Fucidin ointment. Indications for use, reviews 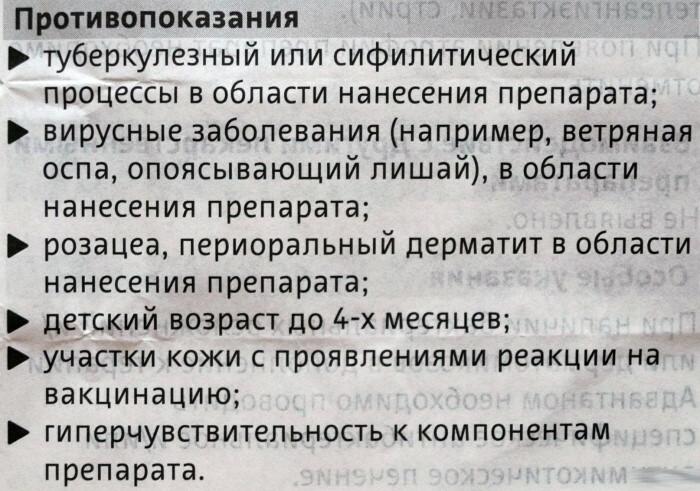 Advantan ointment. Indications for use, price 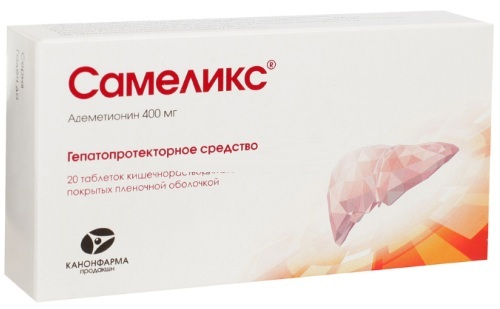