Orotic acid is metabolic medication, used in diagnosing heart pathologies, some diseases of the musculoskeletal system. The drug helps to improve the condition and slows down the progression of the disease.

Instructions for using the product are attached to the tablets; it describes in detail the features of therapy and possible complications during treatment.

The drug can be found on the shelves of pharmacies in the form of oral tablets. They are small and round and white in color. The surface of the tablets is smooth, they do not have a pronounced unpleasant odor.

The tablets are packaged in standard plates of 10 pcs. Blisters are placed in cardboard boxes of 2 pcs., A description is attached to them indicating the features of the application, complications and contraindications. The drug may be called Potassium orotate, since orotic acid is the international name for the drug. The manufacturer can change the name of the drug, but not the active substance.

There are also packs of 30 tablets. It depends on the manufacturer.

The main component in the composition is orotic acid, the amount of which is 500 mg per 1 tablet.

These ingredients have no therapeutic properties.

Orotic acid (instructions for the use of tablets should be studied by the patient before starting use) has metabolic properties, that is, it affects metabolic processes in the body. The ingredient belongs to anabolic agents, it helps to enhance the synthesis of proteins in the human body. 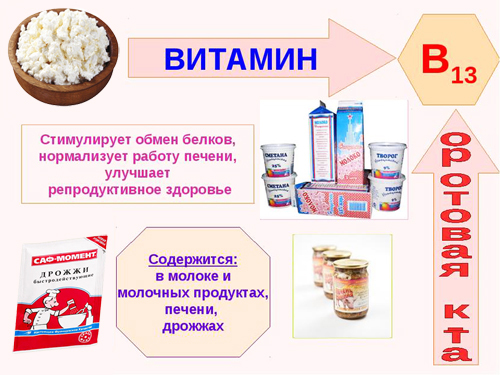 It is because of the effect of the component on the production of proteins that the agent is referred to as anabolic medicines. It is often used by professional athletes to accelerate muscle growth.

The drug does not work immediately after ingestion. Some time after the start of the intake, a therapeutic effect is felt. Orotic acid prevents the development of muscle fiber wasting. The effect is especially pronounced in patients with metabolic disorders and muscle deficiency. The drug beneficially improves the functioning of the liver and gallbladder.

Other actions of the remedy are also noted:

After ingestion, the agent is absorbed in the digestive tract by about 10%, which does not reduce its effectiveness. The main ingredient does not accumulate in the blood and tissues, which somewhat reduces the likelihood of an overdose.

After the substance is processed in the liver, its metabolites are evacuated with the help of the kidneys. Approximately 30% of metabolites are excreted by the urinary system. In patients with disorders of the urinary organs, there is a slowdown in the process of cleansing the body.

In the presence of pathologies of the digestive tract, it is possible to reduce the amount of the ingredient absorbed into the blood after oral use. Changes in pharmacokinetic characteristics depend on the organism of a particular patient.

Orotic acid is used to treat and prevent certain diseases.

The instructions for use describe the possibility of prescribing in the presence of the following indications:

The remedy is not always prescribed when any symptoms appear. In some cases, it allows you to prevent their occurrence.

Orotic acid (instructions for use of the drug allows you to clarify possible obstacles to treatment) cannot used in the case of diagnosing an intolerance to the components of the composition or a tendency to such reactions in the anamnesis the patient.

Other contraindications include the following conditions:

During the examination of the patient, individual contraindications that are absent in the official instructions can be determined.

It is allowed to use the agent for the treatment of patients over 3 years old. But usually pills are prescribed to adults in the presence of certain indications.

The doctor makes a decision on the appointment of a medication after receiving the results of the patient's examination.

The drug is intended only for oral administration in dosages determined by the doctor. Depending on the indications and general condition, the features of therapy may differ.

Children take the remedy for 3-5 days. Longer courses are not recommended. The daily dosage for patients from 3 years old does not exceed ½ a tablet, but it is divided into 2 doses during the day at approximately equal intervals.

If necessary, repeated courses are carried out only after a 4-week break. But doctors recommend making an interval of at least 3 months.

Orotic acid (instructions for the use of tablets describe the possibility of complications during treatment) provokes negative reactions, despite the relative safety of the drug. Compliance with the doctor's recommendations somewhat reduces the likelihood of complications, but does not exclude it.

Negative reactions can manifest themselves in a mild form and disappear on their own after a while. But if you continue to take the drug, they can worsen, appear in an acute form and provoke additional reactions.

If the manifestations worsen, it is necessary to consult a doctor who will determine the need for prescribing special treatment to improve the condition.

The tablet formulation does not lead to the development of an overdose when taken in amounts determined by the doctor during the course of treatment. But the use of a large number of tablets at a time can provoke such complications.

In case of an overdose, an aggravation of all negative reactions is observed. Patients report severe nausea and vomiting, frequent loose stools. Such complications can lead to other disorders, as they provoke the loss of a large amount of fluid, a violation of its absorption in the body.

As a result of frequent vomiting and loose stools, the work of the central nervous system is disrupted, which leads to seizures, impaired consciousness and some other complications. Overdose allergy also manifests itself in an acute form and can turn into acute urticaria, Quincke's edema.

Swelling of the tissues of the throat, eyes, mucous membranes of the nasal passages leads to a deterioration in the supply of oxygen to the lungs. Brain function also deteriorates in the presence of a deficiency. Overdose in exceptional cases leads to suffocation against the background of severe swelling of the throat tissues. The appearance of symptoms of an overdose is considered a reason for an immediate refusal to use the pills and visit a doctor.

It is strongly not recommended to use any medications on your own or ignore the manifestations. The scheme of care for different patients may differ, since the symptoms manifest themselves in different forms.

Orotic acid (instructions for use of the drug describe possible complications arising in period of therapy) should be used strictly as directed, especially in the absence of any symptoms.

It is not recommended to exceed the daily rate and extend the course on your own. In case of complications, it is necessary to stop using the product. Symptoms disappear on their own within 1-2 days. If this does not happen, you should see a doctor.

Experts do not recommend taking the pill with meals. This interferes with the absorption of the ingredient and may somewhat weaken the effectiveness of therapy.

The drug should not be used simultaneously with products that contain the same ingredients in the composition, as this can provoke complications. The medication complicates the process of assimilation of iron, tetracycline antibiotics. If it is necessary to prescribe such funds, it is worth taking a break between taking at least 3 hours.

Some diuretics, hormonal contraceptives, glucocorticosteroids reduce the effectiveness of orotic acid. Doctors should take this into account when prescribing several medications at the same time. In the case when the patient takes any medications on an ongoing basis, it is necessary to notify the doctor about this at the appointment.

The drug has no structural analogs that can be used in patients. But some herbal remedies are often prescribed if patients have signs of intoxication and symptoms of liver damage.

Analogues are selected for each patient individually, depending on the cause of the symptoms and the presence of concomitant complications. It is not recommended to select substitutes on your own, even if any of the drugs have already been used before.

Dispensing funds from pharmacies is free. During storage, it is important not to allow direct sunlight and moisture to come into contact with the tablets.

The tablets are allowed to be stored for 4 years. The date of their production is indicated on the packaging. After the expiration date, it is prohibited to use the medicine.

You can buy the original product for about 90-130 rubles. Its counterparts are somewhat more expensive. Carsil's price is 320 rubles. per packing.

You can buy Leganol for 390 rubles. The cost differs depending on the region of distribution and the amount of medication in the package.

Orotic acid is a popular drug for the treatment of liver pathologies, as well as improving muscle condition in adults and children over 3 years old. Instructions for the use of the medication are attached to the tablets. It describes not only the features of the application, but also the possible complications that arise if the doctor's recommendations are violated.

A video about orotic acid

Astigmatism: photo, causes and treatment. How to treat astigmatism

Astigmatism - a violation of an optical structure of the eye in which the image of the subject is not focused properly on the retina. As a result,...

Nail Fungus - an unpleasant phenomenon, which can ruin the form of beautiful legs. Unfortunately, this disease is one of the most common. For the ...

hydrocephalus brain - this is a serious pathology characterized by an accumulation of cerebrospinal fluid in the head. Most often it occurs in you...