Diet for exacerbation of chronic pancreatitis in adults. Menu

Diet for chronic pancreatitis in adults it helps to relieve the main symptoms of pathology during exacerbation. At the same time, she is able to suspend its further development, preventing the emergence of new relapses.

Organization of proper nutrition during exacerbation of chronic pancreatitis in adults

With an exacerbation of the disease, a lot of protein and a small amount of fat should be present in the diet. Thanks to this, the condition of the gallbladder and pancreas can be normalized. Sometimes a minimum amount of oil can be used.

Protein is essential for the rapid restoration of damaged areas of the internal organ. Patients can eat carbohydrate food in the absence of a tendency to develop diabetes mellitus. In the presence of such a predisposition, it is required to completely limit the intake of foods containing sugar.

When following a diet, be sure to reduce salt intake. To reduce the swelling of the gland within 3 weeks, you need to completely exclude salty foods. If, during an exacerbation, the symptoms are more pronounced, the food should be grated and liquid. In this case, the food should be warm. The restriction is imposed on excessively hot, cold food and drinks.

When creating dishes, it is forbidden to take spices and spices. All products must be fresh. Boil porridge only in water. Puree soups, unsweetened tea, low-fat curd mass and vegetable puree are considered useful.

In stages, you can include egg whites, jelly, a little dried bread, lean fish and meat. Despite the fact that the size of the portion should be small, you should eat often so that there is no feeling of hunger. For this reason, patients experience discomfort in the area of ​​the diseased organ. Meals should be 6 meals a day.

Often, the diet of patients is corrected after the diagnosis, in particular at the stage of exacerbation of the disease. With severe symptoms, it is advisable to follow the rule - coolness, hunger strike and calmness. After an attack, in the first 3 days, you can use unsweetened and weak tea, rosehip broth or mineral water without gas. At the end of fasting, you can eat dishes that have a positive effect on the organ. For example, oat broth or vegetable-based broth. 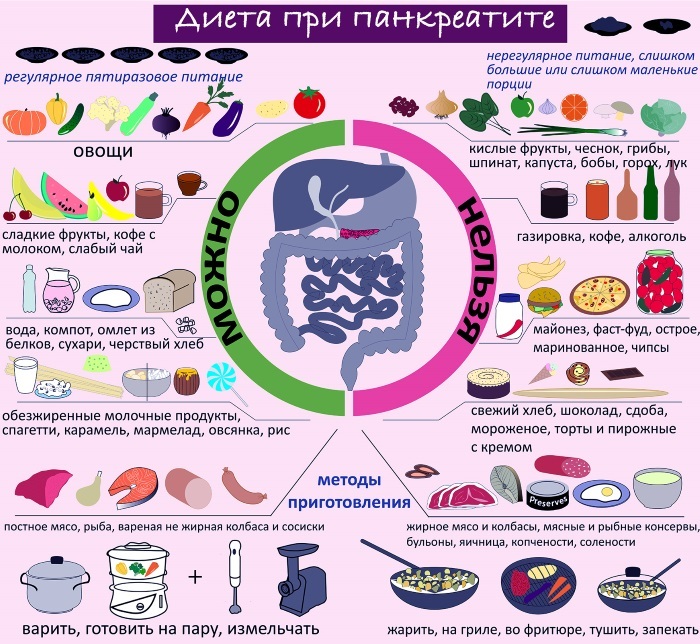 With an exacerbation of pathology for 6-12 months, you should eat fractionally. During the specified period of time, the diseased organ will be able to finally recover. In this case, the patient begins to get used to healthy food. The diet will not be harsh for the patient and will not require increased self-control. With the observance of medical nutrition, surgery can be prevented, as well as a long therapeutic course of treatment.

Diet food must be prescribed by the attending physician, regardless of the symptoms. The gastroenterologist has specific information about the state of the organ, while he has knowledge and skills.

In case of illness, it is allowed to eat the following ingredients:

Milk can be included in jelly, soup or porridge. When the condition is improved, you can eat not too fatty and spicy types of cheese. When creating steam omelets, it is permissible to use eggs. As fruit, only non-acidic varieties of apples are suitable, which are allowed to be eaten in mashed or baked form.

Nutritional therapy at the beginning of an exacerbation

Chronic pancreatitis can occur with a change in periods of exacerbation and remission. The first stage appears when there is a failure in the nutritional system, prohibited foods are included in the food, or strong medications are being taken for a long time.

An exacerbation of chronic pancreatitis is manifested by the following symptoms: 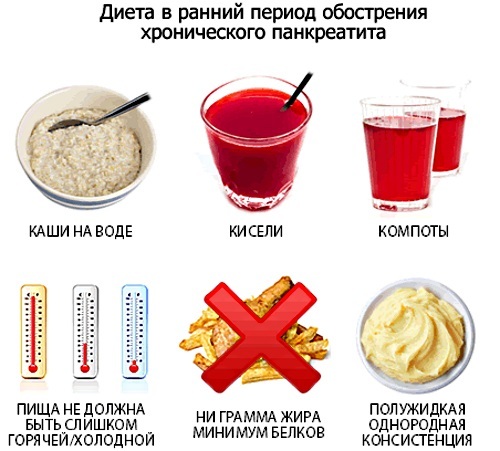 An exacerbation of pathology can occur immediately after eating, especially in the evening. If the above symptoms occur, you need to switch to a strict therapeutic diet with the use of drugs.

The diet for exacerbation of chronic pancreatitis in adults should be gentle, light and simple, so as not to create an increased load on the diseased gland. Products should be free from coarse fibers, animal fats and fiber. In the first 3 days, it is recommended to drink exceptionally pure alkaline water without gas.

Over time, the volume of liquid is allowed to increase, and the diet is replenished with liquid dishes in the form of soups and puree soups. The alkali will reduce the level of acid concentration in the stomach, which will reduce inflammation. Semi-liquid and liquid foods will prepare the digestive tract to switch to richer foods.

Nutrition during an exacerbation

Diet for exacerbation of chronic pancreatitis in adults includes the following products: 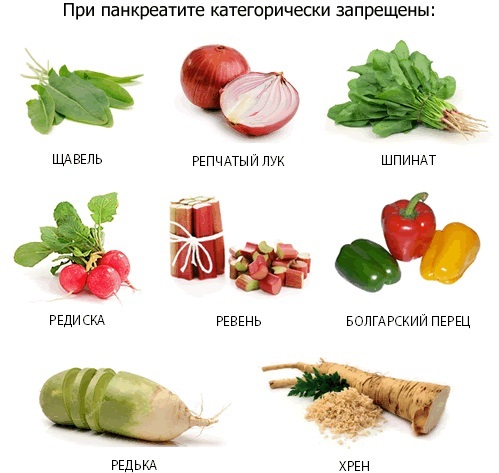 You will need to eat exclusively pureed or ground foods. Food must be chewed well, because the pathology can worsen due to unnecessary stress.

The restriction is imposed on the intake of sugar and salt. It is forbidden to add pepper and other spices to the dish. It is contraindicated to consume alcoholic beverages, fresh flour baked goods, fast food, excessively fatty, fried, salted, smoked and pickled foods. If you have bad habits, they also need to be abandoned.

Diet after exacerbation of pancreatitis

With exacerbation of chronic pancreatitis in adults, a scar remains. With permanent formations of such scars of the connective tissue of the internal organ, which performs the digestive function, very little remains. As a result, the quality of digestion becomes poor over time.

To slow down this process and reduce the likelihood of a relapse, it is recommended to adhere to a dietary regimen. Products can be baked or boiled, as well as cooked in a multicooker or double boiler. After an exacerbation of the pathology, you need to eat up to 5 or 6 times a day.

After an exacerbation of pancreatitis, the following ingredients can be included in the list of permitted foods:

Serving volume should be no more than 200 g per day. The last meal should be 3 hours before bedtime, it is forbidden to allow very long intervals. The optimal period between meals is considered to be no more than 4 hours.

Sample menu for a week

Diet for exacerbation of chronic pancreatitis in adults means feeding in small doses up to 6 times a day. In this case, it is forbidden to overeat. On the first day of exacerbation, you must completely refuse to eat. It is allowed to drink a small amount of non-carbonated mineral water. After that, the diet can be diversified.

Below you can find a sample menu for the week. You can plan it yourself using ingredients from the approved list.

In the evening before going to bed, it is advisable to drink 150 ml of yogurt or fresh kefir. Throughout the day, instead of bread, it is recommended to eat dried crackers. The tea should be weak and warm. For easy assimilation of products, they must be warm.

Diet for exacerbation of chronic pancreatitis in adults excludes hot and cold products. Food should be warm above body temperature. Products must not be marinated and fried.

Table of contraindicated foods for illness:

The above list of products is incomplete and can be supplemented with respect to the condition of the pathology and the patient's personal preferences.

Step-by-step description of the preparation of a hot product:

To create a meat dish, it is recommended to prepare the following ingredients:

To prepare a treat, you should prepare the following foods:

For dinner, you can cook barley porridge.

To do this, you need to prepare the following components:

A detailed description of the process of preparing the side dish:

For an afternoon snack, you can make apple mousse.

This requires the following products:

The diet for chronic pancreatitis in adults limits the intake of foods that increase the formation of acid, and helps to reduce the load on the diseased organ. With an easy stage of pathology, dietary nutrition is adhered to for several months, general recommendations are followed throughout life in order to prevent the onset of a period of exacerbation of the disease.

What and how to eat properly with pancreatitis:

Prednisolone - a synthetic glucocorticoid drug. On the action of a pharmacological agent to be found in the instructions for use.The content of the...

Adnexitis - a disease of the genital organs of the female body, in which the inflamed uterus, and it ovaries and fallopian tubes. Women are usuall...

Aerophobia as easy to get rid of the fear of flying on an airplane?

Aerophobia a fear of flying or other aerial vehicles. This phobia can be associated with numerous other phobias, but may be present on their own. ...