Infrasound is sound waves, which are not perceived by the human ear, since they are below the frequency of the range of auditory perception. Despite this, such waves are capable of influencing a person and causing various effects in the body.

What is infrasound and how is it formed

Infrasound is sound waves or vibrations with a frequency range below 16 Hz.

Sound waves like this are generated by many different processes. Oscillations can be generated by the earth's crust during an earthquake, volcanic eruption, lightning discharges, hurricanes and other natural phenomena.

The process itself is due to the movement of molecules, which is caused by vibrations of an object or other processes. A similar effect can be explained with the help of guitar strings, which vibrate at a specific frequency and cause sound effects (molecular movement).

It should be borne in mind that infrasonic waves, like other types of waves, propagate only in air. In a vacuum, this effect is not observed; complete silence always reigns in it.

Table of sources of infrasound and oscillations created by it

Each source of infrasonic vibrations has its own frequency range and effect on the body. The sources themselves are subdivided into technogenic and natural. The first include sounds made by equipment and machinery (cars, trains, airplanes, installations). 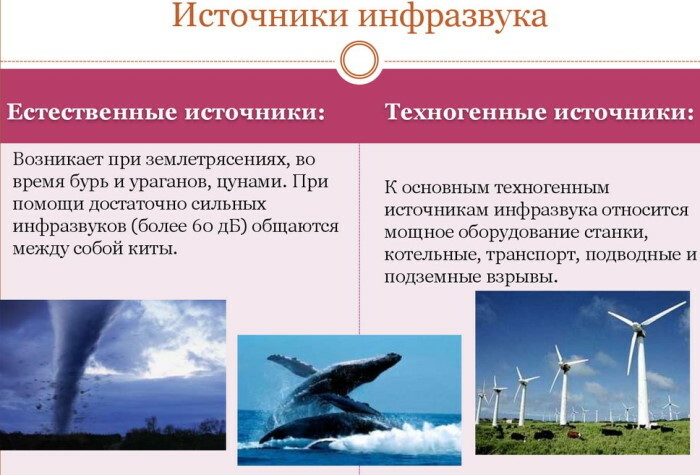 Among animals, sperm whales, hippos, water bugs, and cicadas have the highest noise pressure. Their sound range varies from 100 to 160 dB.

The loudest infrasound of natural origin is the Tunguska meteorite. The noise pressure during its explosion was about 300-315 dB. At the same time, the waves were recorded using various installations around the world.

Infrasound (the effect on a person can be insignificant or lead to severe and dangerous conditions) has a low vibration frequency. Despite this invisible range, noise has different effects on the body.

The human ear is unable to perceive infrasonic waves, since their range is below the frequencies that receptors located in the ear region can pick up.

The perceived range should be above 16 (infrasound) and below 18-20 kHz (ultrasound). The rest of the frequencies are not perceived regardless of the person's age.

Sound vibrations below 16 Hz are not completely inaccessible to the human ear. Readings above 20 kHz can be detected in some individuals or children and adolescents.

Infrasonic Ranges of Rhythms of the Human Body Systems

The human body (internal organs) vibrates at different frequencies and emits minor sound vibrations. Thus, the vibration frequency of each organ or system is individual and will differ from each other.

Resonant frequencies at which deviations in the work of organs are observed:

The following indicators are considered normal indicators for the operation of systems:

The alpha rhythms of the brain are most influenced, since the infrasonic vibrations are in tune with the work of this system. In this case, a pronounced psychotropic effect is observed at rates of about 7 Hz.

What frequencies are perceived by the human body

Sound vibrations above 20 thous. Hz are ultrasound, below 16 Hz - infrasound. The human body perceives frequencies in the range of 500-2000 Hz best of all. The extreme threshold for auditory perception is considered to be values ​​below 16 and above 20,000 Hz. Ranges outside these limits can only be recorded using special equipment.

Unlike humans, animals are more sensitive to such vibrations and can communicate with each other through these frequencies (for example, whales or elephants). Also, jellyfish are the harbingers of the storm, which feel the initiation of infrasonic waves 15-20 hours before it starts, after which they go to a depth.

Infrasound (the effect on a person can be both at low and high vibration frequencies) can affect human physiology and lead to various sensations, symptoms, and disorders. Moreover, its physiological effect depends on the intensity, duration and other characteristics.

The negative influence of infrasound waves can lead to damage to the nervous and endocrine systems, as well as other internal organs - insufficient oxygen supply to the tissues of the organs.

The low frequency of sound waves is the least hazardous to human health, but it can also lead to various disorders on the part of various organs.

Low-frequency vibrations can cause nausea, ringing in the ears, blurred vision and unaccountable fear in a person. Moreover, the intensity of these manifestations also depends on the duration of exposure to sound waves. 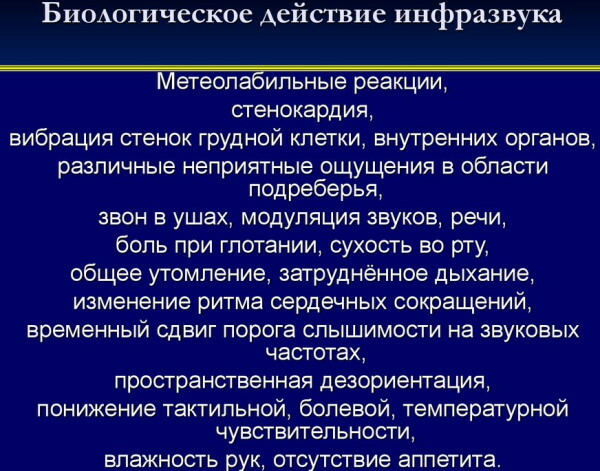 With prolonged exposure, these symptoms can persist for a long time and lead to various mental or psychosomatic problems.

Fluctuations of medium (moderate) intensity can lead to disturbances in various internal organs and systems of the human body. In most cases, the digestive organs are damaged, and brain function worsens. However, other signs may develop, depending on the duration of the fluctuations.

The most optimal values ​​for a moderate frequency of vibration of sound waves are indicators from 140 to 154 dB. These figures are within acceptable limits.

However, pain in the area of ​​the tympanic membrane can occur at rates of 130-140 dB, therefore, people who often listen to music with headphones are advised not to exceed the norm of more than 110 dB.

Infrasound with a high level of vibration can also lead to various disorders in the human body. In this case, a negative effect is observed at a frequency of the wavelength range from 0.20 to 0.71 Hz. 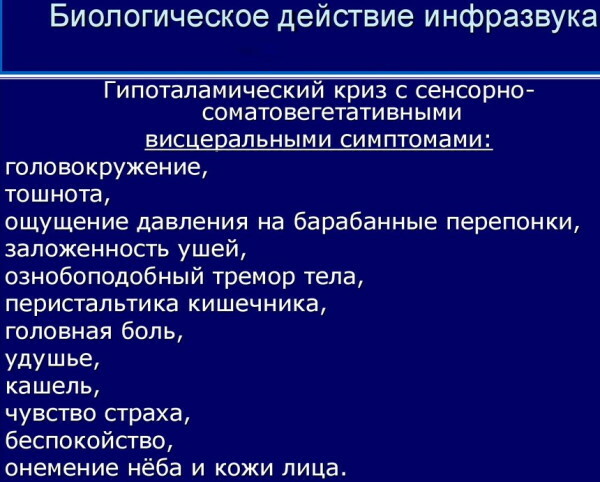 In addition to the main symptoms, the intensity of which is significantly increased, a person may also have other mental disorders.

High-frequency infrasound pressure (180-190 dB) can be fatal, since such exposure can lead to rupture of the pulmonary alveoli. In this case, the person may experience cardiac arrest.

Medical and psychological impact of infrasound on the body

The studies carried out have confirmed the effect of infrasound on the human psyche and body. This is due to the interaction of the auditory center with the nervous system.

Sound vibrations, which are not perceived by the human ear, irritate the receptors of the sound analyzer and lead to various changes. Such an impact is not realized and is sent to the unconscious level, from where it affects a person.

For example, sound waves with a frequency higher than 100 Hz have an effect on the thought processes, the nervous system, which leads to the development of the following symptoms:

Low frequencies (below 10 Hz) can lead to the following symptoms:

Medium-length waves can cause nausea, weakness, and migraine in a person. In this case, the negative effect is on the heart, central nervous system. In this case, a violation of the functions of the digestive system and the brain may occur. Cases of paralysis and blindness have been reported.

Infrasound (the effect on a person occurs only at a pressure of over 120 dB) has been repeatedly studied by specialists in various fields, which made it possible to come to certain conclusions. It is believed that many nervous and somatic disorders in people living in large cities and metropolitan areas are caused precisely by the impact of infrasonic vibrations. Such a statement is just an assumption, since special studies on this topic have not been carried out.

What does infrasound affect:

Infrasound of certain frequencies refers to a psychotronic weapon, so its effect is extremely dangerous. He can influence the human psyche, suppress it and manipulate it.

The action of sound waves on the human psyche with the help of infrasonic waves is similar to the principles of action of hypnosis, suggestion, neurolinguistic programming (NLP).

Recent studies have also confirmed the positive effects of infrasound waves on the human body. Experiments show that such fluctuations can be used in medicine to treat various disorders. Low frequencies were most effective in treating wounds, burns, and cuts.

However, more in-depth research on this topic has not been carried out, since such experiments and effectiveness are considered questionable. Such a frequency is ineffective in medicine, since sound waves with a frequency of 285 Hz (solfeggio frequency) have a therapeutic effect.

Infrasound (the effect on humans can be fatal) has a low frequency vibration and amplitude sound waves, which makes it possible to influence living organisms - mammals, birds, other animals. This is due to the ability of the brain to vibrate at the frequency of alpha rhythms in tune with infrasound.

Long-term exposure to infrasound waves of varying intensity can lead to the development of chronic symptoms caused by such fluctuations.

Thus, the waves can damage the vestibular nerve and cause the so-called motion sickness. In this case, a person will constantly have symptoms in the form of dizziness, nausea, headaches, tinnitus.

It has also been found that sound vibrations cause chronic fatigue and insomnia in humans. These signs arise as a result of damage to a part of the vegetative system (regulatory system).

With prolonged exposure to high-intensity infrasound, a lethal outcome can occur.

Low frequency waves have a high penetrating power, so they can overcome and bend around various obstacles. Any objects, including walls, have no protective function.

Walls with sound-insulating material (in the case of natural origin of sound waves) are also ineffective.

Earplugs alone will not be enough to protect against high intensity sound waves. This is true for both natural and man-made sources of noise origin. They are only able to keep the eardrums from sound vibrations.

The only effective remedy against the negative influence of infrasound is distance from the epicenter, the point of origin of oscillations. However, this method is not always applicable, since a person cannot be protected from natural phenomena (thunder, storm, earthquake) or man-made factors (noise from traffic or other technical installations).

As a preventive measure, it is recommended to regulate the intensity of infrasound at the point of its occurrence. This applies to equipment, instruments and other technical devices with high noise performance.

Other recommendations for the prevention of the formation and exposure of infrasound in production conditions (factories, plants):

Soundproofing means will help protect against the negative influence of infrasound at home with a man-made source. Such means are able to protect the human body only with man-made sources with low noise pressure. It is currently impossible to isolate natural noises, which creates a certain danger to human health.

Influence of infrasound on humans: 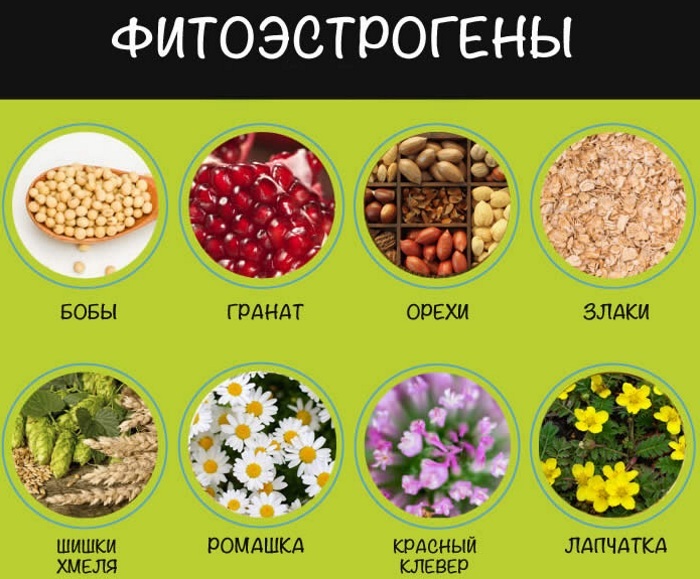 Hot flashes in women. Symptoms and treatment in 50+ years

Ecofuril suspension for children. Instructions for use, price, reviews

Bronchipret syrup for children. Reviews for what cough to take