The type of breathing in women is normal, in men. Difference chest, abdominal

Breathing is a physiological process of ensuring stable vital activity of all systems and departments of the human body. Nasal canals, larynx, trachea, bronchi, lung tissue and alveoli are directly involved in saturating the blood with the required amount of oxygen.

External respiration is a continuous process that is regulated by the central and peripheral nervous systems. Reflex contraction of skeletal muscles activates biological mechanisms responsible for the functioning of the respiratory system. Normally, in women of all age categories, the chest type of breathing prevails.

What types of breathing are there?

The table below describes the types of breathing in men and women in the absence of pathologies of bronchopulmonary tissue. 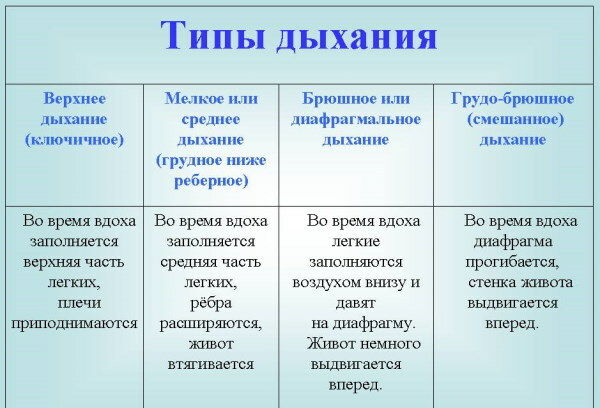 Physiologically normal breathing patterns are present in healthy men and women. Diseases of the central and peripheral nervous system, diseases of skeletal muscles, consequences injuries and surgical operations lead to disturbances in the work of the muscles of the diaphragm and intercostal space of the thoracic cells.

The table below describes the pathological types of breathing that are periodically diagnosed in women and men of different age categories. 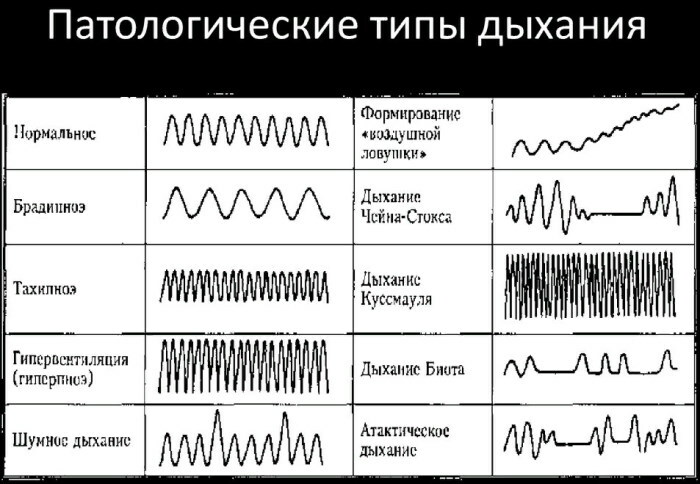 The type of breathing in women (normally, a smooth and measured contraction of the muscle tissues of the intercostal space should be preserved) is different creating an increased load on the muscles of the chest, which is activated in response to the innervation of the peripheral nerves of the autonomic systems.

How does chest breathing work?

Chest breathing is a natural process of the body's vital activity, which is involuntary or voluntary. These functions of the bronchopulmonary tissue, skeletal muscles are coordinated by the centers of the brain and the somatic nervous system. The muscles of the chest, intercostal space alternately contract and relax, providing inhalation and exhalation, saturation of the body with vital oxygen.

At the moment air enters the respiratory system, the function of active ventilation of the alveoli is realized, which take part in gas exchange. At the time of exhalation, concentrated carbon dioxide is removed from the bronchi, as well as a small amount of depleted oxygen.

The moment of inspiration is the initial stage of the implementation of the respiratory function in women in the presence of thoracic breathing.

During moderate and deep inspiration, the upper portions of the lungs receive the greatest ventilation. As the chest is saturated with the required volume of air, the underlying rib rises in relation to the overlying one.

Due to this, it is visually noticeable how during chest breathing there is a smooth raising and lowering of the anterior chest wall. At this stage of the physiological process, the load on the ribs is compensated by the inspiratory muscles. This is the internal interchondral and intercostal muscles.

At the moment of exhalation, the expiratory muscles, which belong to the internal intercostal muscles, contract synchronously. During their relaxation, the overlying rib of the chest is pulled towards the underlying rib. For a faster exhalation in conditions of chest breathing, the expiratory and inspiratory types of muscle tissues are simultaneously activated. In this case, the scalene, sternocleidomastoid and dentate muscles are included in the work.

Atmospheric air passes through the nasopharynx, trachea, and then enters the lung cavity. At this stage, a mixture of ambient gases is passed through the bronchi of the lobar, segmental, lobular type and alveolar passages. Only after that, atmospheric air enters the pulmonary alveoli. The alveolar sacs and passages, together with the respiratory bronchioles, form a single alveolar tree in the form of the respiratory parenchyma of the lung tissue.

The physiological process of gas exchange is provided by the following biological mechanisms of the female body:

It has been scientifically proven that in the process of consuming 1 liter of pure oxygen, the human body releases up to 20.9 kJ of energy. This figure is 5 kcal. A similar effect occurs due to the oxygen oxidation of fats and carbohydrates.

The abdominal type of breathing is predominantly found in men, and is also characterized by the presence of the following distinctive features:

In the rest of the process, abdominal breathing proceeds according to exactly the same physiological principle as saturation of the body with air through the activation of the intercostal muscles of the chest. The distribution of oxygen through the blood, tissues of internal organs and the musculoskeletal system remains unchanged. 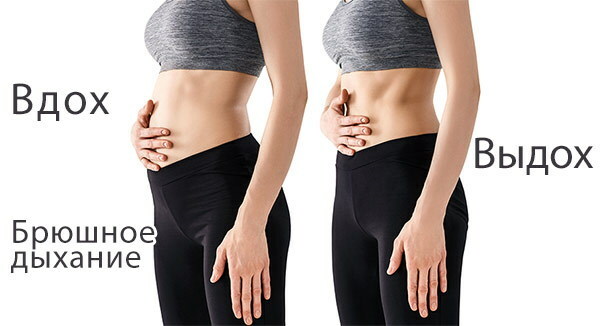 At the same time, it is believed that abdominal breathing is more efficient, since during muscle contraction, the diaphragm improves ventilation properties of bronchopulmonary tissue, facilitates the outflow of venous blood from the abdominal cavity towards the heart muscle.

Breathing in women is normal

The type of breathing in women (normally, the work of the muscles of the chest should remain stable) is characterized by a lower rhythm of inhalation and exhalation. The depth of the inhaled air directly depends on the volume of bronchopulmonary tissue, age, presence or absence of concomitant diseases of the body, physical form.

In women, the normal resting breathing rate is 18 to 22 repetitions. In the presence of a respiratory volume of the lungs of 0.5 liters for 1 min. about 7 liters of air passes through the organs of the female respiratory system.

A woman who is in a state of physical rest can fill her lungs with 500 ml of clean air during 1 breath. This is the normal tidal volume of a healthy person. A similar volume of air enters the environment after exhalation, but with the products of gas exchange. The maximum tidal volume in women, which is within the physiological norm, is 2000 ml of air. When you exhale, exactly the same amount of gas should be released.

Normally, the balance of oxygen and carbon dioxide is constantly maintained in the lungs of a healthy woman. This is the residual functional capacity of the bronchopulmonary tissue, which provides full alveolar ventilation. At moments of physical exertion, psychoemotional overstrain and stressful situations, the rate of female respiration can increase to 12 liters per minute.

A woman who does not have diseases of the cardiovascular, respiratory system can live without breathing for 5 to 7 minutes. After the specified period of time, irreversible changes are triggered in the cells of the brain, which entails the onset of biological death.

The type of breathing in women (normally, in a calm state, the frequency of inhalation and exhalation does not exceed 22 repetitions) is chest to reduce physical stress on the muscles of the abdominal cavity. Male breathing is the activation of the musculature of the diaphragm. 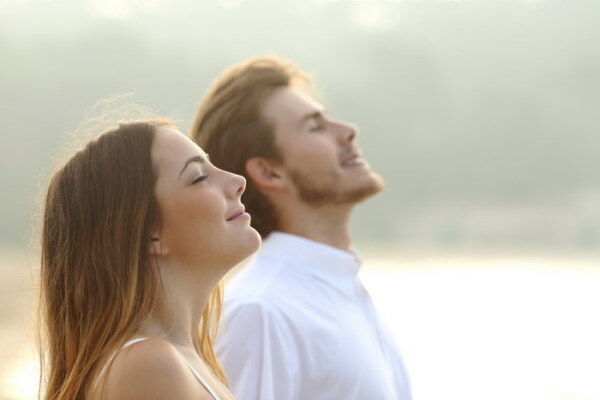 The presence of this anatomical difference in the work of the body is also due to the peculiarities of the uniform distribution of the load between the muscle tissues. For example, in men who work hard physically, abdominal breathing is almost always present. If a man's chest breathing prevails, then this is also not a sign of pathology.

What are the differences between male and female breathing

The main differences between male and female breathing are that during inhalation, most women activate the intercostal muscles. Due to this, at the moment of air absorption, a smooth rise of the chest upward with its lowering down on exhalation is observed. This is a thoracic type of breathing that is necessary for women to relieve the muscles of the abdominal cavity during the period pregnancy, when the fetus grows so large that it puts pressure on the muscles diaphragm.

Due to the expansion of the rib cage, women are able to breathe with their breasts without creating the effect of squeezing the developing child. Male breathing involves minimal expansion of the chest, which is achieved by activating the muscles of the abdominal cavity while flattening the diaphragm.

Muscle tissues located in the intercostal space receive minimal stress. In the process of male breathing, venous blood from the tissues of the abdominal cavity returns much faster to the cavity of the heart muscle.

Danger of chest breathing for a woman

The type of breathing in women (normally at the moment of inhalation all the muscles of the intercostal space work synchronously) is pectoral, and in men, the muscles of the diaphragm are more active. By itself, chest breathing does not pose a danger to the female body. Its only drawbacks are considered to be a low level of efficiency, as well as energy costs.

For example, more effort is spent to activate the muscles of the intercostal space than to flatten the diaphragm during abdominal breathing. Also, pulmonologists note that the chest type of air absorption often leads to the development of shallow and shallow breathing. In the future, this may cause functional disorders in the work of the cardiovascular system and organs of the lower respiratory tract.

How to develop the correct breathing technique

To master the correct breathing technique, it is recommended to use special exercises aimed at the development and formation of the normal functioning of the bronchopulmonary tissue.

With the help of this exercise, the mechanical functions of the respiratory system are improved, the quality of gas exchange increases.

An exhalation with resistance is performed as follows:

This exercise should be repeated up to 5 times a day. The average duration of 1 workout should be at least 15 minutes. Exercise "Exhale with additional resistance" allows you to improve the technique of chest breathing.

Regular performance of this exercise will allow you to master correct abdominal breathing, and to master it, it is recommended to adhere to the following algorithm of actions: 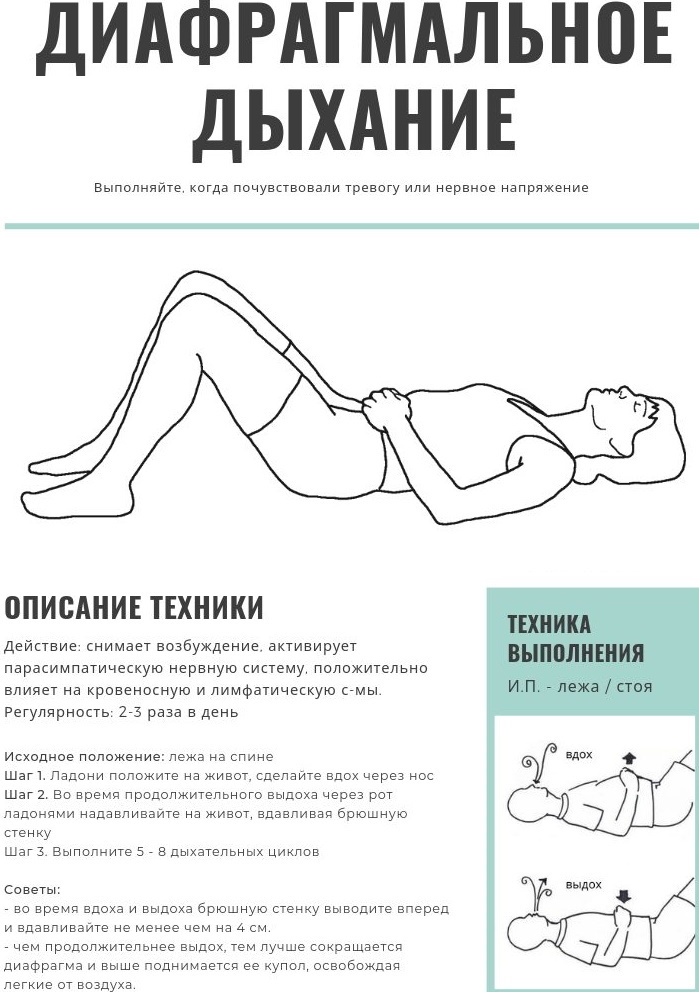 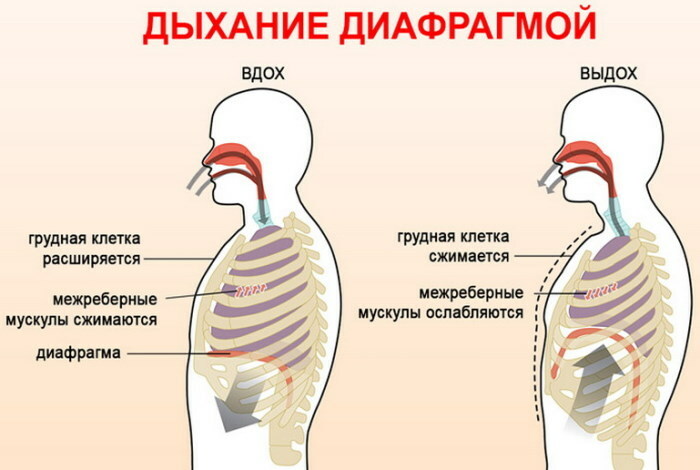 At the initial stages of mastering the technique of diaphragmatic breathing, it is recommended to perform this exercise from a prone position. After sufficient strengthening of the abdominal muscles, you can take up a sitting and standing position. This exercise is performed daily in the morning and in the evening for 10-15 minutes.

The use of this breathing technique is indicated for women who want to improve the thoracic type of breathing, to strengthen the muscles of the intercostal space.

To master the technique of posterior chest breathing, the following rules must be followed:

Mastering the technique of posterior chest breathing requires regular training of bronchopulmonary tissue for 1-2 months. This exercise is performed for 30 repetitions in the morning, afternoon and evening.

Breathing is a vital physiological process, during which all tissues and cells of the human body are provided with the required amount of air. Normally, women take 18 to 22 breaths per minute. This is provided that they are in a state of physical and psychological rest.

The anatomical feature of the female body is that they are dominated by the thoracic type of breathing. This is necessary in order to reduce the physical stress on the abdominal muscles, which are in a state of hypertonicity in late pregnancy. Diaphragmatic breathing is common in men.

Video about breathing types in women

Laryngotracheitis in adults - is pretty serious infectious disease. Its danger lies in the fact that the infection affects the trachea and gullet....

Chronic gastritis - a stomach disease that takes a relatively long period of time and its characteristic features is a violation of, the change co...