Atherosclerosis. Symptoms and signs, what is this disease

Atherosclerosis is a systemic disease which initially affects the arteries containing cholesterol with esters. They create special plaques that are characteristic of this type of pathology. Below you can familiarize yourself with the types of the disease, its symptoms and signs, as well as methods of treatment.

Atherosclerosis (symptoms and signs are given for informational purposes) has several varieties regarding the location of the pathology and which internal organ has impaired blood circulation.

The disease affects the large arteries of the circulatory system. The aorta leaving the heart passes through the abdominal and thoracic cavities and branches into small vessels that communicate with the limbs, kidneys, lungs, digestive organs and the brain.

If atheromatous plaques form in one of the areas of the aorta, this can provoke serious consequences.

It is considered a chronic pathology that forms lipid plaques in the lumen of the heart arteries. The latter interfere with normal blood flow, resulting in tissue ischemia. 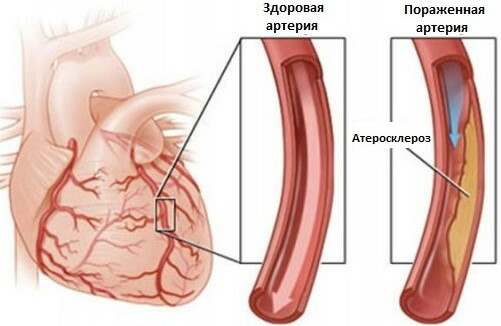 Coronary atherosclerosis is divided into 2 types:

As a result, myocardial infarction can occur, as well as ischemic heart disease.

Plaques form in the blood vessels of the brain, causing a stroke. In this case, the carotid arteries with a brachycephalic trunk may be affected. Although the artery can be narrowed by 50%, this type of disease can be asymptomatic.

It manifests itself in those areas where large vessels branch out. Plaques often form in the popliteal and superficial femoral arteries. If you do not consult a specialist in time, one of the vessels may completely block. As a result, ischemic gangrene may occur, in which limb amputation may be required.

Symptoms are very rare. Failure of lipid metabolism and plaque deposition are presented as a diffuse process that affects all arteries. The disease affects the state of the brain and heart. Blood flow in the hands can sometimes be impaired.

The cause of the formation of vasorenal hypertension is the appearance of a plaque in the orifice of the renal artery. 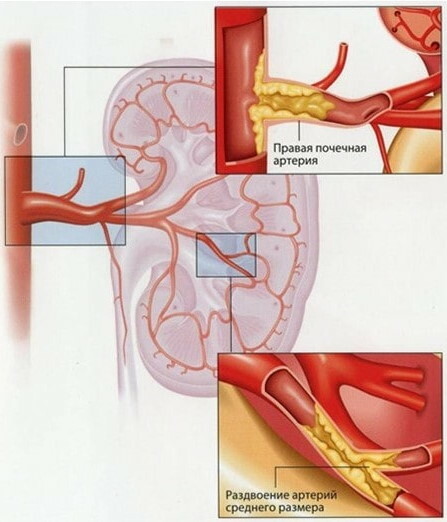 As a result, vascular thrombosis or damage to 2 kidneys may occur, which is considered a malignant tumor. To prevent the occurrence of a problem, it is necessary to undergo diagnostics in time.

Erectile dysfunction is considered the main symptom of the manifestation of pathology. However, with such a disease, it is recommended to perform a complete diagnosis for the presence of cardiovascular pathologies.

The course of the pathology is characterized by 3 stages of development, which have serious consequences.

After birth, small yellowish lipid spots form on the vascular walls. In the future, they will increase in size and combine with each other. Macrophages destroy them and become foam cells. Subsequently, fatty strips are formed from the foam cells and smooth muscle cells of the vessel walls.

However, at this stage of development, the pathological process may not progress, and fibrous plaques do not form.

If fatty strips appear in the areas, connective tissue proliferation occurs. Fibrous plaques are formed from the latter and fat cells. Initially, they have a soft structure, which allows them to dissolve if medical intervention is carried out in time. Otherwise, calcium salts will begin to accumulate in them, and they will become solid.

Deformation of fibrous plaques occurs, as a result, cracks, ulcers or ruptures appear on them. This stage can be triggered by the accumulation of cholesterol or the activity of macrophages. 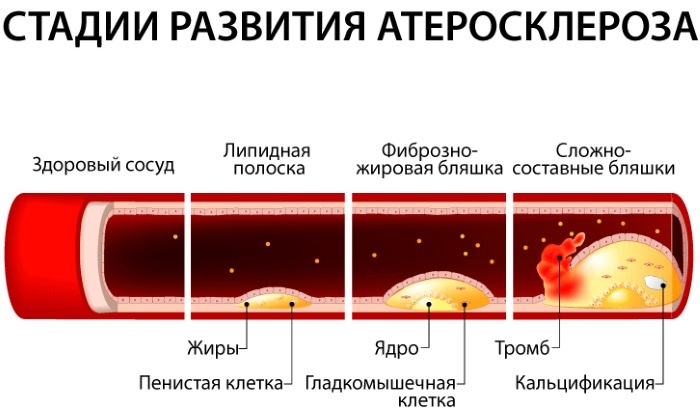 Platelets begin to adhere to deformed plaques, which provokes complete or partial blockage of the vessel.

Atherosclerosis (symptoms and signs at the initial stages of pathology may not appear) at an early stage it is permissible to detect only instrumental diagnostics, since a person may not feel that plaques have formed on the arterial walls until they begin to interfere normal blood flow.

Atherosclerotic deformity of the arteries can affect people aged 30 and older. However, at a more mature age, the factor of disease formation increases. Moreover, atherosclerosis is much more common in men than in women.

Symptoms and signs of pathology will depend on the affected arteries:

The pathology is systemic, therefore, if deformed arteries are detected in one area, atherosclerosis can affect other vessels.

Atherosclerosis (symptoms and signs will depend on age, lifestyle and the presence of other diseases) does not have an exact cause. When the arterial walls are deformed, lipids begin to be deposited in this area. As a result, atherosclerotic plaques are formed. However, deformation factors can be different.

There are several reasons that can increase the risk of atherosclerosis:

If the listed risk factors are present, a person may not get atherosclerosis, because he does not manifest itself in all people who have diabetes mellitus, high blood pressure, or the elderly age. However, for prevention purposes, it is advisable to try to reduce the number of risk factors.

Atherosclerosis (symptoms and signs of a specific type of disease can be diagnosed with tests and ultrasound) can be examined at any medical center. The diagnosis will be based on the results of the instrumental diagnostic method and analyzes. A consultation with an examination is able to determine the causes of the pathology. Consultation with other doctors can tell you which organs have been affected.

To identify the disease, you need the following:

Additionally, a specialist may prescribe a general urine and blood test, as well as an ophthalmologist's consultation.

Symptoms of atherosclerosis can be treated with several methods. However, at the same time, it is necessary to separate those procedures that are aimed at preventing signs of the disease and stopping its pace. development, as well as those activities that are aimed at treating pathologies associated with atherosclerotic deformation of the arteries.

It is recommended to change the lifestyle and adjust the diet. The patient should lose weight, give up alcohol and smoking, and perform moderate physical activity.

To reduce the level of cholesterol, it is recommended to abandon fried, spicy, spicy delicacies, semi-finished products, smoked with salty, fatty foods, as well as meat broths. At the same time, it is necessary to reduce the amount of salt intake. 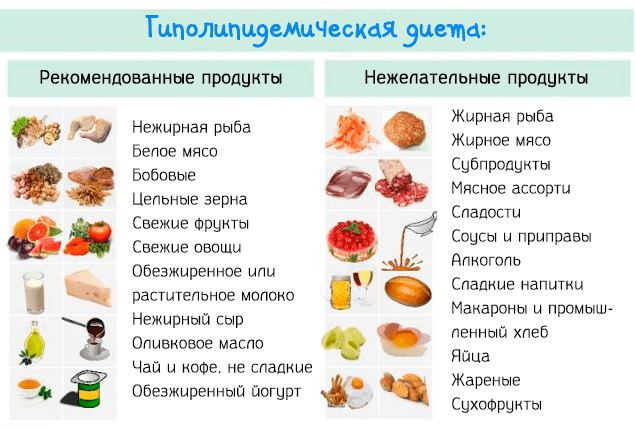 Do not eat the following foods:

It is necessary to adhere to a fractional five meals a day, the menu of which includes fermented milk products with fruits, vegetables (excluding potatoes), low-fat cottage cheese, low-fat fish and meat.

To clean the vessels, it is advisable to use oat and wheat bran, unrefined cereals, and coarse bread. It is recommended to eat about 200 g of fresh fruits and 300 g of vegetables per day.

To lower cholesterol, you need to eat crushed flax seeds. It is permissible to eat them just like that or add them directly to food. Together with dietary food, the patient should move regularly.

Treatment with medication aims to achieve the following goals:

A specialist can prescribe the following drugs to patients:

The dosage with the course of treatment should be prescribed exclusively by the attending doctor.

If dietary food with medication does not help get rid of atherosclerosis, a specialist may prescribe the following surgical interventions:

Atherosclerosis (symptoms and signs can worsen if not properly treated) of the lower extremities can be very dangerous if not treated promptly. As a result, gangrene, muscle atrophy or thromboembolism of the vessels of internal organs develops, if the plaque has detached.

If the coronary vessels were affected, complications may occur in the form of coronary sclerosis, myocardiosclerosis, focal dystrophy of the heart muscle, myocardial infarction.

When the mesenteric arteries are blocked, ischemic colitis or intestinal gangrene can occur. If there is a blockage of the renal arteries, secondary arterial hypertension may form.

Aortic aneurysm is especially dangerous for the patient's life. If it bursts, it can be fatal.

Symptoms and signs of the disease provoke a lack of nutrients and oxygen, as a result, the activity of internal organs gradually fails. In the presence of acute atherosclerosis, the blood flow is completely blocked, which causes serious consequences in the form of gangrene of the lower extremities, stroke, myocardial infarction and other dangerous complications.